Fast flowing or deep floodwater could be life-threatening, the Met Office warned, and power cuts or the loss of other services is possible. 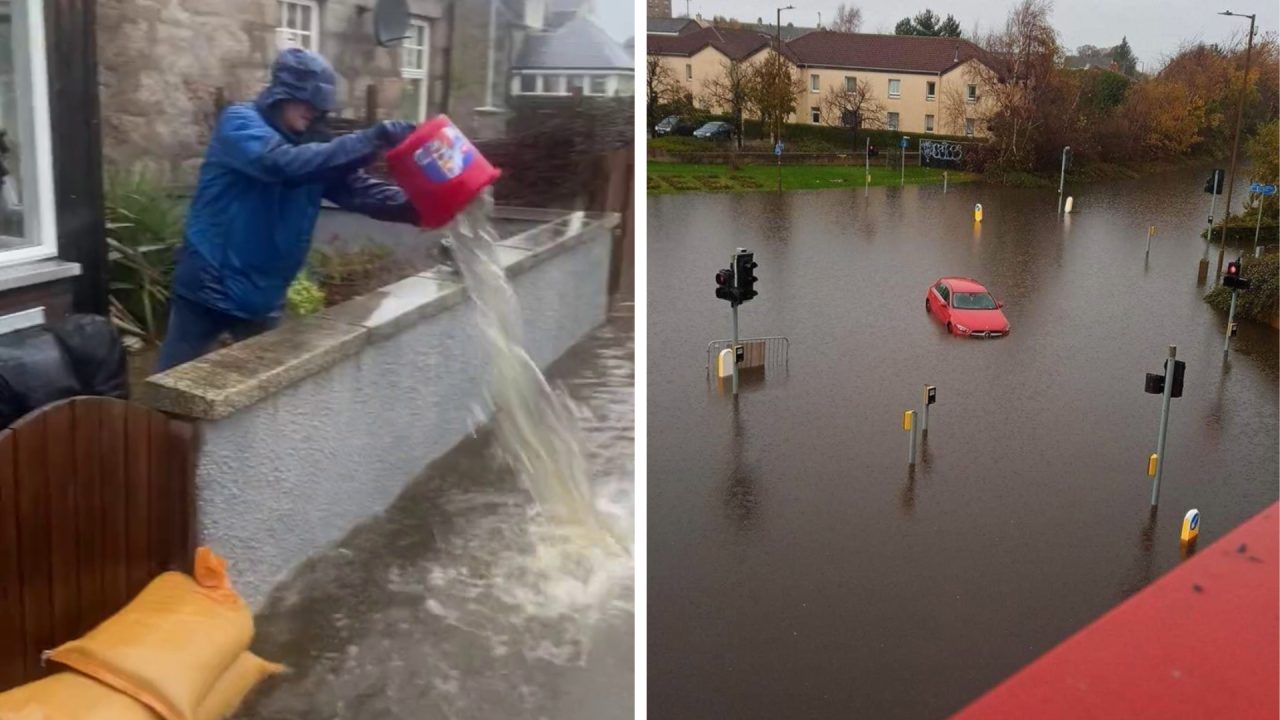 A severe weather warning has been put in place in parts of Scotland following widespread flooding.

Scottish Government ministers chaired an emergency meeting of Holyrood’s resilience committee amid significant disruption in which parts of the country experienced a month’s worth of rainfall in just a few hours.

Schools were closed and travel was severely impacted for much of Friday, with homeowners in some areas battling to bail floodwater out of their properties.

An amber weather warning covering Tayside, Fife, Grampian and central areas is in place until 9pm on Friday.

The Met Office also warned power cuts of the loss of other services is possible.

The Scottish Fire and Rescue Service says Operations Control rooms are receiving a high number of emergency calls due to flooding in Brechin, Forfar and Dundee.

ScotRail said there is severe disruption across much of its network in eastern and northern Scotland.

There are no trains running from Dundee to Aberdeen, Aberdeen to Inverness, Perth to Inverness, or Inverness to Wick. Only limited replacement transport is available.

In Edinburgh, where a yellow weather warning is in place, the junction of Ferry Road and W Granton Access has been flooded leaving cars stranded.

SEPA’s flood duty manager said the organisation was working with emergency services to identify areas in need, but warned waterside communities were likely to have flood warnings in place for at least the next few days.

Justice secretary and lead Minister for resilience Keith Brown said arrangements “had been activated” to monitor the situation over the weekend.

“We are in close contact with resilience partners, local authorities and the emergency services to ensure people in the affected areas receive the latest information, advice and support where needed,” he said.

Police Scotland has warned of a high risk of disruption to travel in affected areas.

She said: “As an amber warning for heavy rain has been issued, we are urging motorists to plan ahead and avoid unnecessary travel.

“The Met Office, SEPA and Traffic Scotland websites have valuable information about weather disruptions and we would advise people to check these sites before setting off on your journey.

“If you do need to drive, make sure you and your vehicle are suitably prepared by having sufficient fuel, waterproofs, warm clothing, food and water in the event you are delayed and be mindful of increased stopping distances when breaking.”

SEPA flood manager Vincent Fitzsimons said: “Heavy and persistent rain overnight has led to significant increases in river levels across the east of Scotland. We have seen almost a month’s worth of rain in some parts already this week and we are expecting around the same again over the course of Friday and Saturday in parts of Northeast Scotland.

“The highest risk is to riverside communities in parts of Aberdeenshire and Angus, with Severe Flood Warnings already issued.

“The worst impacts will occur between early Friday afternoon and early Saturday morning. We are working 24/7 with the Met Office and with information from SEPA’s gauge network to review the flood predictions for these communities and others. This will continue until the risk is over.

“SEPA is working with emergency response partners in the areas most at risk to help them prepare and to focus support to those communities who need it most. People living and working in affected areas are advised to plan their essential journeys and consider the steps they need to take now to be prepared and to stay safe. They can also keep updated on floodline.sepa.org.uk.”

Rain is becoming quite an issue in parts of the country after some very wet spells recently.

Usually the wettest conditions are found in the west of Scotland, and that was certainly the case last month when we experienced our wettest October on record in Renfrewshire and South Uist. But in the last few days the worst of the rain is affecting the east of the country, along with a strong easterly wind.

Some extremely high rainfall totals look likely, especially across Aberdeenshire, Angus and parts of Perthshire. For example, the average rainfall for the whole of November is around 130mm in Deeside, but as much as 100mm could fall through Thursday and Friday – nearly a month’s worth in just two days.

Eastern parts of the Borders and East Lothian will also see some unusually wet conditions. These areas normally get about 70mm of rain for the whole month, and around that amount is expected to fall on Thursday and Friday.

At this time of year long sustainable periods of rain can cause more issues as many of the drains get blocked by falling leaves which leads to large areas of water building up on the roads, and perhaps some becoming closed off due to flooding.

Rivers in eastern areas will be getting monitored closely by SEPA, with currently the main area of concern, around Coupar Angus, Ruthven and Meigle.