The Scottish Government will receive an extra £1.5bn as part of the package, but Hunt warned of 'difficult decisions' from a grim financial forecast. 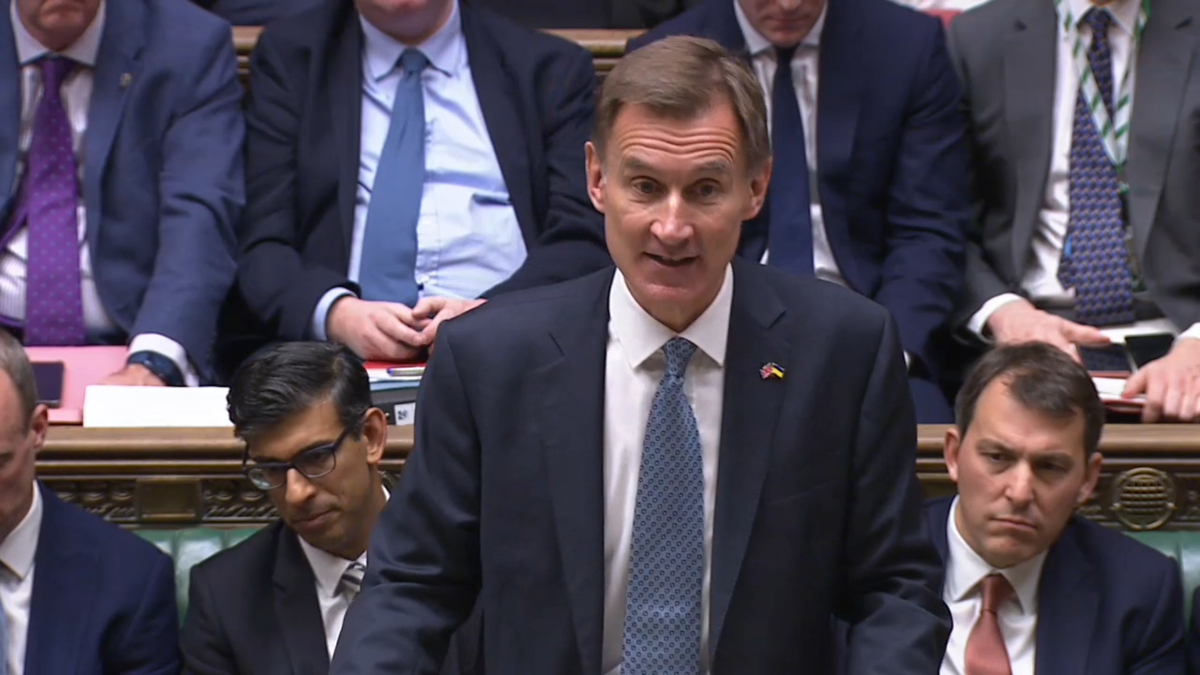 The UK has slid into recession after months of economic downturn, according to official figures.

The Office for Budget Responsibility (OBR) said forecasts pointed towards a shrinking of the economy of around 1.4% in the next year.

Chancellor Jeremy Hunt announced the news in the Commons as he set out plans to hike taxes and slash spending to tackle the cost of living crisis and limit the financial slide to a “shallower downturn”.

The Scottish Government is to receive an additional £1.5bn as part of the Autumn Statement package, while pensions will rise in line with inflation by more than 10%.

First Minister Nicola Sturgeon and deputy John Swinney however both criticised “difficult decisions” taken by Hunt among £30 billion of spending cuts and £24 billion in tax rises over the next five years as an “austerity budget”.

Windfall taxes on oil and gas giants have risen from 25% to 35% from January 1 until March 2028, while a 45% levy on electricity generators will also be introduced at the start of the new year.

Hunt said that would raise around £14bn to help those struggling against soaring bills.

He added that now would “be the wrong time” for the UK to abdicate its international climate responsibilities and reaffirmed the government’s commitment to the Glasgow COP26 pact to reduce emissions by 68% by 2030.

However, electric vehicles will no longer be exempt from Vehicle Excise Duty from April 2025 to make the motoring tax system “fairer”, Hunt told the Commons.

Hunt added the “triple lock” on pensions would be protected, meaning they would increase by the highest of the previous September’s inflation figure, the average wage increase, or 2.5%.

But a review of the state pension age will be published in early 2023.

Meanwhile, additional cost of living payments of £900 to households on means-tested benefits, £300 to pensioner households and £150 for individuals on disability benefit were also announced.

Hunt said OBR forecasts pointed to a reduction in the UK’s inflation rate from 9.1% this year to 7.4% next year and that his autumn statement will cause inflation to “fall sharply” from the middle of 2023.

Government spending rises will continue to increase at a slower rate than previously planned, while stamp duty cuts announced in previous chancellor Kwasi Kwarteng’s mini-budget will now be time-limited.

Hunt told MPs: “Anyone who says there are easy answers is not being straight with the British people: some argue for spending cuts, but that would not be compatible with high-quality public services.

“We want low taxes and sound money. But sound money has to come first because inflation eats away at the pound in people’s pockets even more insidiously than taxes.

“So, with just under half of the £55 billion consolidation coming from tax, and just over half from spending, this is a balanced plan for stability.”

Sturgeon lamented the chancellor for “making the same mistakes” as previous Conservative governments by slashing spending and failing to tackle wealth inequality.

She said the plans were “likely to worsen the extreme pressures already being faced as a result of inflation and rising interest rates”.

Deputy Swinney added it remained to be seen whether or not the added funds were a positive or negative for Scotland.

However he praised engagement with the UK Government ahead of the Chancellor’s statement on Thursday, adding he had also been in contact with chief secretary to the Treasury John Glen following the announcement.

He added: “The engagement is better, now it frankly couldn’t have been any worse than the chief secretaries that I’ve dealt with – I’m now on my third chief secretary in my temporary incumbency in the finance portfolio, and the other two, the dialogue was awful – so this is much better.”