Travel agents say sector has been ‘sacrificed’ amid pandemic

A survey found that 96% of Scots who travelled overseas between March 2020 and today felt very or fairly safe. 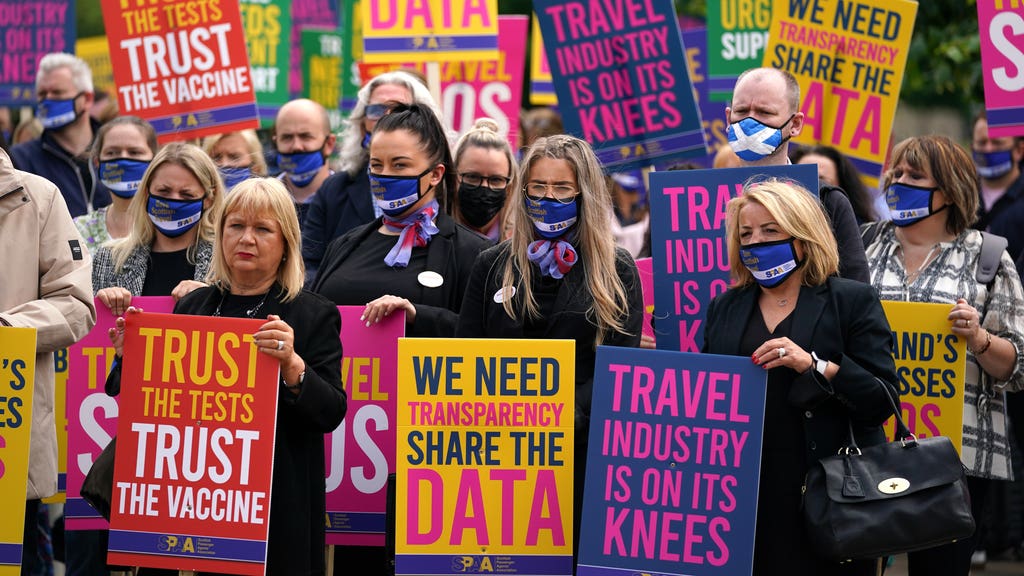 The travel sector is calling for answers from the Scottish Government as it claims it is being “sacrificed” amid the coronavirus pandemic.

More than 250 members of the Scottish Passenger Agents’ Association (SPAA) and their associates, including airlines, tour operators and pilots, protested outside the Scottish Parliament on Wednesday as part of a UK-wide Travel Day of Action.

They are demanding sectoral support for travel, clarity over the data being used to ground the industry, a plan for a safe return to international travel and a low-cost, easy-to-access testing regime.

Among the protestors were pilots in uniform with their families.

It comes as a survey for the SPAA found more than nine in ten (96%) Scots who travelled overseas between March 2020 and today felt very or fairly safe.

Only four percent of overseas travellers felt “not very safe”, with no travellers reporting that they “did not feel safe at all”.

Joanne Dooey, SPAA president, said: “We’re hoping that the First Minister comes to meet us to explain why, despite a world-beating vaccination programme and easily accessible albeit expensive testing, we’re further behind at opening up travel than we were 12 months ago when we had no rapid testing and no vaccination.

“Our survey of ordinary Scots shows that almost two-thirds of Scots feel devastated, disappointed, confused or upset at the current travel restrictions and more than half (57%) would travel overseas within the next 12 months if they were able – with 17% of all surveyed saying they would be willing to travel in the next three months or sooner.

“We want the Scottish Government to show us their data, to trust the vaccine and to make testing more affordable.”

She added: “The travel sector will be out in force to keep up pressure on the Scottish Government for support for travel agents during this disastrous ordeal for our whole industry.

“We’ve challenged the First Minister to come and meet us so we can explain why we feel that our businesses and the wonderful people we employ seem to be being sacrificed.”

The OnePoll survey of 876 adults in Scotland was carried out this week.

It found that since March 2020, only ten percent of those surveyed have been overseas, while 35% have cancelled at least one holiday, 28% have postponed and 17% have rebooked.

Seven in ten (70%) respondents said they usually travel overseas at least once in a typical pre-Covid year, with almost a third of them going two or three times.

Jacqueline Dobson, president of Barrhead Travel, said: “Literally millions of people who work in the travel industry have lost their jobs, millions more fear for the future and are suffering every day while governments continue to restrict travel without constructive engagement or support for the industry.

“This is no idle warning – the UK travel industry is at risk.”

A Scottish Government spokesman said: “We do not underestimate the significant impact the pandemic continues to have on the tourism sector, both outbound and inbound. International travel restrictions are important in limiting the importation of further cases of the virus, in particular new variants, which could undermine the rollout of our vaccine programme.

“The business minister also met the Scottish Passenger Agents’ Association and ABTA on Tuesday to hear directly the sector’s concerns and consider options.

“Decisions on traffic light allocations take into account a range of factors including genomic surveillance capability, transmission risk and Variants of Concerns, with data behind decisions to move countries on the list published online.

“We keep all measures under review and continue to engage with industry and international partners to explore how we can open international travel safely.

“Both tailored and wider economic support is still available to the sector, including the furlough scheme.”