Tory MSP thrown out the chamber for calling Sturgeon a liar

Oliver Mundell accused the FM of lying to parliament when she pledged full transparency to Holyrood's Salmond inquiry. 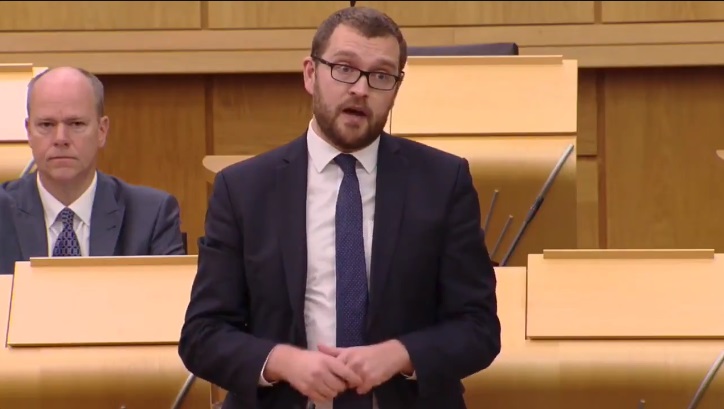 A Conservative MSP has been ejected from the Holyrood chamber after accusing the First Minister of lying to parliament and then refusing to apologise for the remark.

Dumfriesshire MSP Oliver Mundell claimed Nicola Sturgeon had lied when she previously pledged full co-operation and transparency with Holyrood’s inquiry into how harassment complaints against Alex Salmond were dealt with.

On Tuesday, the Scottish Tories suggested the FM had “misled” parliament amid frustration among MSPs on the inquiry with the lack of evidence it has received, with its convener going as far as to accuse the Scottish Government of “obstruction”.

Mundell, who is the son of former Scottish secretary David Mundell, raised this as a point of order in the Scottish Parliament chamber on Wednesday.

Challenged about his use of language by presiding officer Ken Macintosh, he refused to withdraw his accusation that the First Minister had “lied to parliament”.

The presiding officer then demanded he leave.

Outright accusing another elected member of telling a lie in the chamber is deemed unparliamentary language.

After Salmond successfully took the Scottish Government to court in 2019 over its botched handling of harassment complaints against him, a special committee of MSPs was set up to investigate what had happened.

She also repeatedly pledged the Scottish Government would “cooperate fully” with the probe and offer maximum possible transparency.

But SNP MSP and inquiry convener Linda Fabiani said on Tuesday the committee is experiencing “frankly, obstruction” from the Scottish Government.

It has previously complained of missed deadlines for evidence and key files heavily redacted or withheld by the government, with officials citing legal reasons for doing so.

Fabiani said the committee still awaits written submissions from the Scottish Government, from SNP chief executive Peter Murrell – Sturgeon’s husband – and from Salmond himself – and “simply cannot proceed” without the evidence it needs.

Citing the First Minister’s remarks to the chamber in January, Mundell repeated the Conservative accusation that she had misled MSPs.

He said: “Will the presiding officer ask the First Minister to explain why she lied to parliament?”

Macintosh said the issue is being looked at by the committee and suggested Mundell raise the matter with it directly or ask the question during a parliamentary debate.

The presiding officer then asked the Tory MSP to “apologise for using the term ‘lied’ in the chamber”.

But Mundell declined, and said: “I do feel it is the appropriate word, and I can’t find anything else that would express the sentiment.”

Macintosh urged him to make his point “without personalising and making pejorative terms which are disrespectful to other members” and said his remarks were not “befitting of Mr Mundell’s character”.

The Dumfriesshire MSP hit back: “I think it’s disrespectful to the parliament for the First Minister to make a promise and not to keep it.

The presiding officer answered: “I’m going to have to ask you to leave the chamber, I don’t think that language is acceptable.”

She added: “The First Minister has agreed to personally give evidence to the committee – and as we have made clear, not only is the government providing all possible material to the committee, we intend to initiate legal proceedings seeking to allow the release of further documents.”