The Scottish Conservative are attempting to block the Scottish Greens from having a question at FMQs. 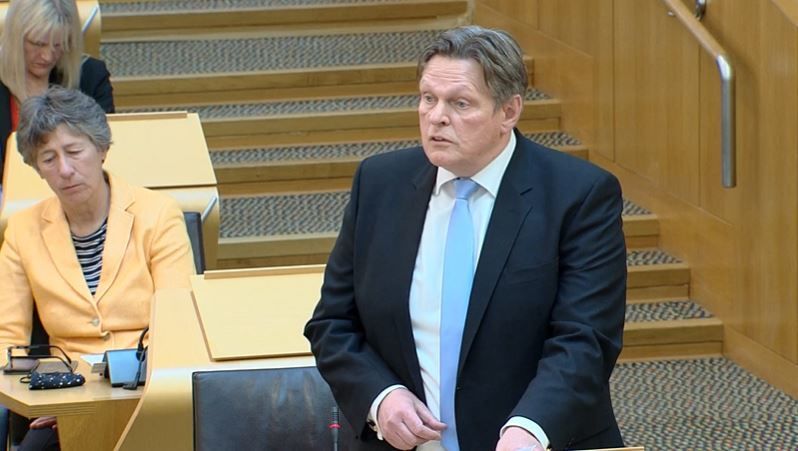 The Scottish Conservatives say they have “formally started proceedings” with Holyrood to remove the Scottish Greens from their position at First Minister’s Questions.

It comes after a deal between the Greens and the SNP was announced on Friday – a move which will see them become the first greens in government for the first time anywhere in the UK.

The agreement could also see Green MSPs being given ministerial roles, despite it not being a formal coalition.

But, Scottish Conservative chief whip Stephen Kerr has branded the deal a “nationalist coalition of chaos”, as he said that the Greens should now be stripped of their chance to ask First Minister Nicola Sturgeon a question during FMQs.

“It would make a mockery of the Scottish Parliament if members of the government were allowed to tee up Nicola Sturgeon with waste-of-time queries to help her run the clock out at First Minister’s Questions,” he said.

“Proper opposition scrutiny of the SNP-Green Government is essential. How will softball questions from Patrick Harvie, drafted in Nicola Sturgeon’s handwriting, hold the government to account?

“The Greens can’t have their cake and eat it. Now that they’re officially forming a nationalist coalition of chaos, they can no longer even pretend to be an opposition party. That would undermine Scottish democracy.

“We have formally started proceedings with the Scottish Parliament and Presiding Officer to remove the Greens from their position at FMQs, in line with the precedent set by the Labour-Lib Dem government.”

Scottish Labour leader Anas Sarwar also hit out at the agreement, accusing the Greens of being a “branch office” of the SNP.

“From voting against pay rises for care workers, failing to reform the council tax, and tripling cuts to Scottish councils, this confirms the long-held suspicion that the Scottish Greens are a just a branch office of the SNP,” he said.

“If the Greens are to be anything more than simply the SNP’s lackeys, they need to re-discover their principles and fight for a greener Scotland rather than roll over to the SNP every time the going gets tough.

“Scotland needs a real alternative that is standing up for our national recovery, the NHS and decent jobs – not the same old constitutional arguments.

“Scottish Labour are building that alternative, and I’d invite everyone in Scotland to join us on that journey”.

The agreement was welcomed by health secretary Humza Yousaf, who hit out at the “hysterics” from opposition politicians.

He Tweeted: “Delighted with SNP-Green Cooperation Agreement. Shows a mature, grown-up politics where two Parties can come together & work in the best interests of Scotland, at a time the Country needs it the most.

“The hysterics from the Opposition betray just how worried they are about it!

“We remain two distinct Parties, there are areas of disagreement as well as agreement, but where we disagree we can do so as in a respectful matter.”