'The buck stops with me', says Nicola Sturgeon over ferries fiasco

It comes after a scathing report by Audit Scotland set out a 'multitude of failings' in the delivery of the ferries. 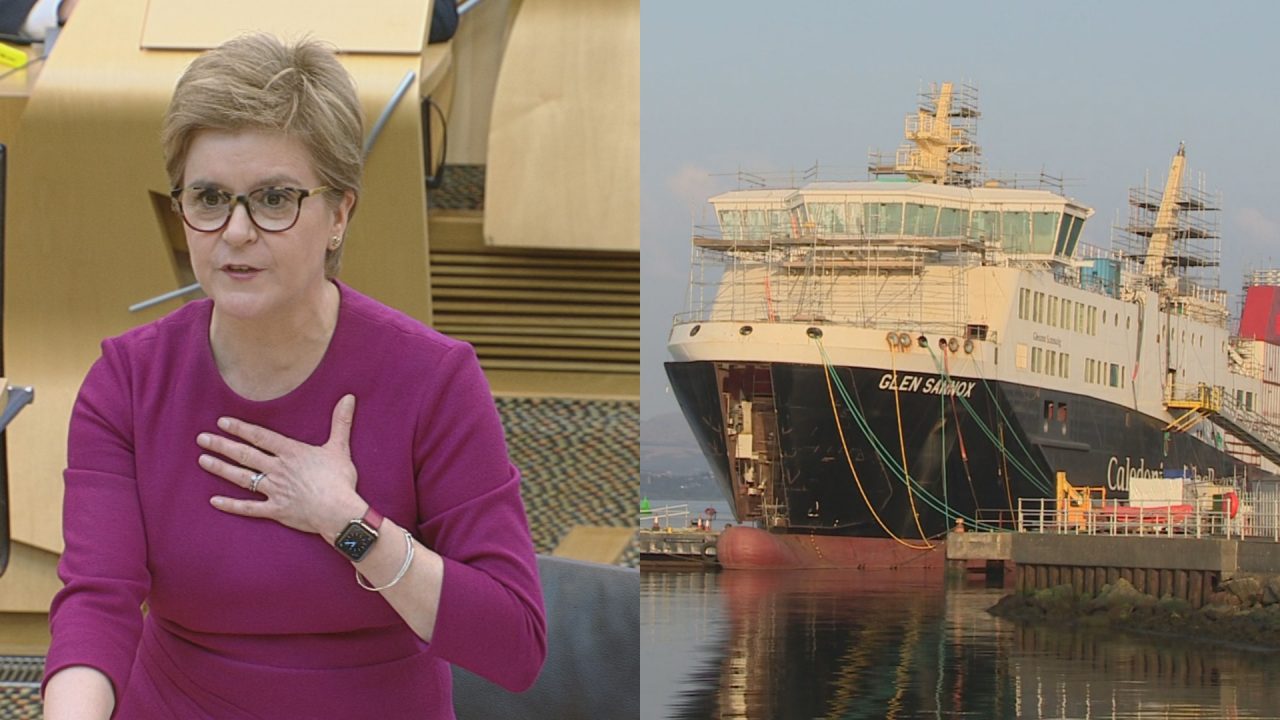 Nicola Sturgeon has said the “buck stops with me”, as she was accused of “one of the worst public spending disasters” since devolution.

It comes after a scathing Audit Scotland report set out “a multitude of failings” in the delivery of two ferries for Scotland’s island routes – now almost four years late.

The auditor said that the two vessels being built at Ferguson Marine will now cost at least £240m, two-and-a-half times their original price.

Raising the issue at First Minister’s Questions, Scottish Conservative leader Douglas Ross said it was “one of the most reckless decisions ever taken” by a Scottish Government.

Responding to Ross, Sturgeon acknowledged that the problems with the construction of the ferries is “far from satisfactory”.

“Let me say very candidly, the problems with the construction of these ferries, which resulted in delay, cost-overruns and an impact, a very negative impact on island communities, is far from satisfactory, and I think that is putting it mildly,” she said.

“The report that was published by Audit Scotland yesterday is entirely fair and justified.

“There are a number of complexities, but these are public contracts and therefore of course the buck stops with the Scottish Government.”

She added: “I am responsible ultimately for all decisions that the Government takes, the buck stops with me.

“I have never tried to shy away from that on any issue.”

Sturgeon also responded to Ross’ questioning who was the minister responsible for the time of the decision.

She told MSPs: “Who was transport minister at the time in question is of course a matter for public record, that was Derek Mackay.

“And ultimately, as with any decisions whether I am personally involved in them or not, responsibility stops with me.”

Ross called for a public inquiry as he asked why Ferguson Marine were given the contract.

“The First Minister says she takes ultimate responsibility, then throws an ex-minister, a disgraced SNP ex-minister, under the bus,” said the Scottish Conservative leader.

“So if we’re looking at ultimate responsibility from the First Minister, can she tell us why a key safeguard was removed that could have saved Scottish taxpayers hundreds of millions of pounds?

“Can she tell us, with her ultimate responsibility, why they started building the ferries when they didn’t even have a design agreed?

“With her ultimate responsibility, can she tell us why Ferguson Marine were given the contract in the first place?

“And with her ultimate responsibility, can she tell us why there is not going to be a public inquiry into this whole scandal?

“Because we need this public inquiry because Audit Scotland tried to get answers, but they couldn’t.”

Ross insisted that the decision taken was ‘reckless’ as he described it as a ‘public spending disaster’.

“First Minister, this is one of the most reckless decisions ever taken by a Scottish government, so far costing a quarter of a billion pounds of taxpayers’ money,” he said.

“This is one of the worst public spending disasters since devolution”.

Sturgeon said that the Scottish Government will consider what form a further review into the issue takes.

She said: “We of course have had a parliamentary committee look into this issue, we’ve now had a major Audit Scotland review.

“But as Audit Scotland itself recommends, at page seven I think, on completion of the vessels, there should be a formal review of what went wrong with a view to learning lessons.

“So the Scottish Government will consider what form that further review will take.”