Chancellor visits Glasgow and the Isle of Bute amid row over Scotland's borrowing powers. 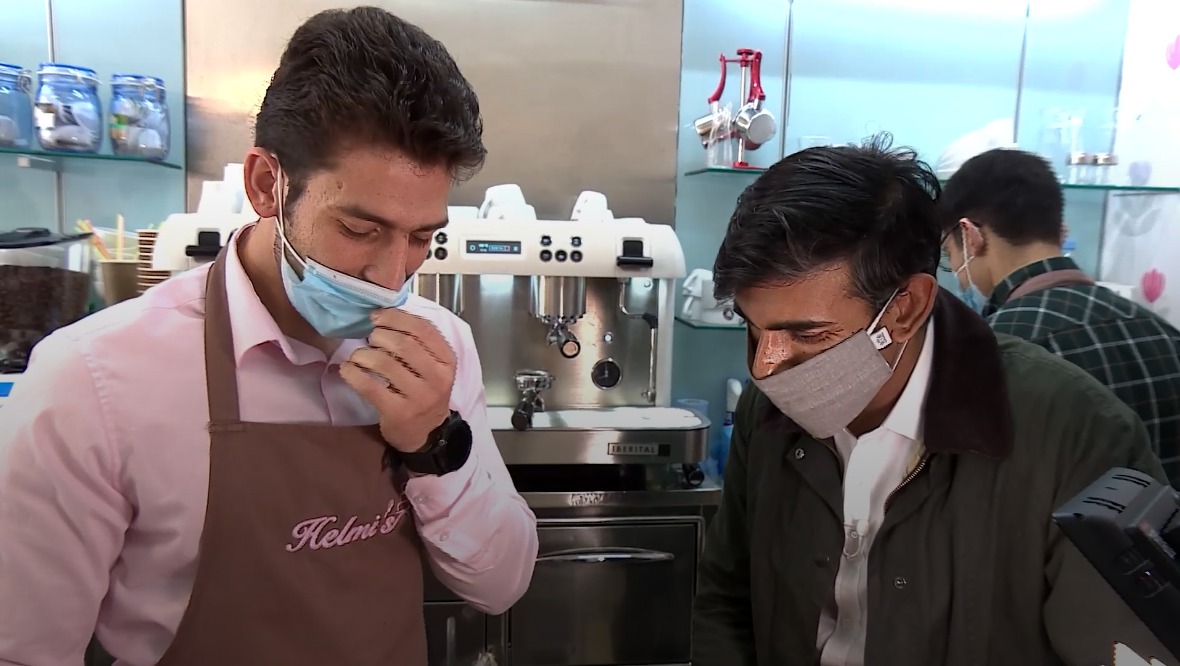 The chancellor has hailed “considerable financial support” given to the Scottish Government amid a row over borrowing powers.

Speaking on a visit to Glasgow, Rishi Sunak said the UK Treasury had already provided backing in an “unprecedented fashion” during the coronavirus pandemic.

He said: “They (the Scottish Government) have £6.5bn of extra funding this year guaranteed to provide support as they see fit in Scotland and when it comes to borrowing, again, they already have borrowing flexibilities.

“But, of course, we always want to engage with the Scottish Government and making sure that our fiscal framework works really well and constructively for everybody.

“That’s due to be reviewed in the next year or so and I think we will embrace those discussions in a constructive fashion.”

Sunak also paid a visit to the Isle of Bute during his trip to Scotland – he is the fourth UK cabinet minister to travel north of the border in recent weeks.

During his visit, Scottish finance secretary Kate Forbes said on Twitter that she doubted Sunak understood what she described as an “urgent need” for more fiscal powers.

Forbes said most of the new powers sought would not cost the Treasury a penny, and claimed Sunak, therefore, “either doesn’t care… or it’s purely a political position”.

Constitution secretary Mike Russell has said extending the borrowing powers of the Scottish Parliament could lead to the furlough scheme in Scotland continuing beyond the October cancellation date.

Separately, Sunak warned holidaymakers of the risk of travelling abroad during the coronavirus crisis amid concerns France may be the next nation to be added to the quarantine list.

He said ministers will “not hesitate” in ordering travellers coming back from countries with high Covid-19 rates to isolate for 14 days, as Belgium, Andorra and The Bahamas lose their exempted status.

Travellers returning to the UK from those three nations from Saturday must enter quarantine, and there are fears those coming back from France could be next with cases there increasing.

“We’re dealing with a global pandemic and, given that, it does mean that there is a risk to travel, and travel can be disrupted so people need to be mindful of that.”

“We’re dealing with a global pandemic and, given that, it does mean that there is a risk to travel, and travel can be disrupted so people need to be mindful of that,” said Sunak.

“I know it’s frustrating but it’s right that we keep things under review and if we think that we can improve our health security by making these changes then, of course, it’s the right thing for us to do.”

France’s coronavirus rate has increased steadily in the past month to 13.2 new infections per 100,000 people, suggesting the spread is worse than in the UK, which has a rate of 8.4.

However, France still appears to be faring better than Belgium, which has seen its rate soar to 27.8. It also has a rate lower than Spain’s when it was added to the restriction list at around 27.4.