Re-elected Sturgeon vows to stage indyref2 ‘when time is right’

Giving an acceptance speech after being re-elected in Glasgow, the First Minister said her party is set for a fourth term in power. 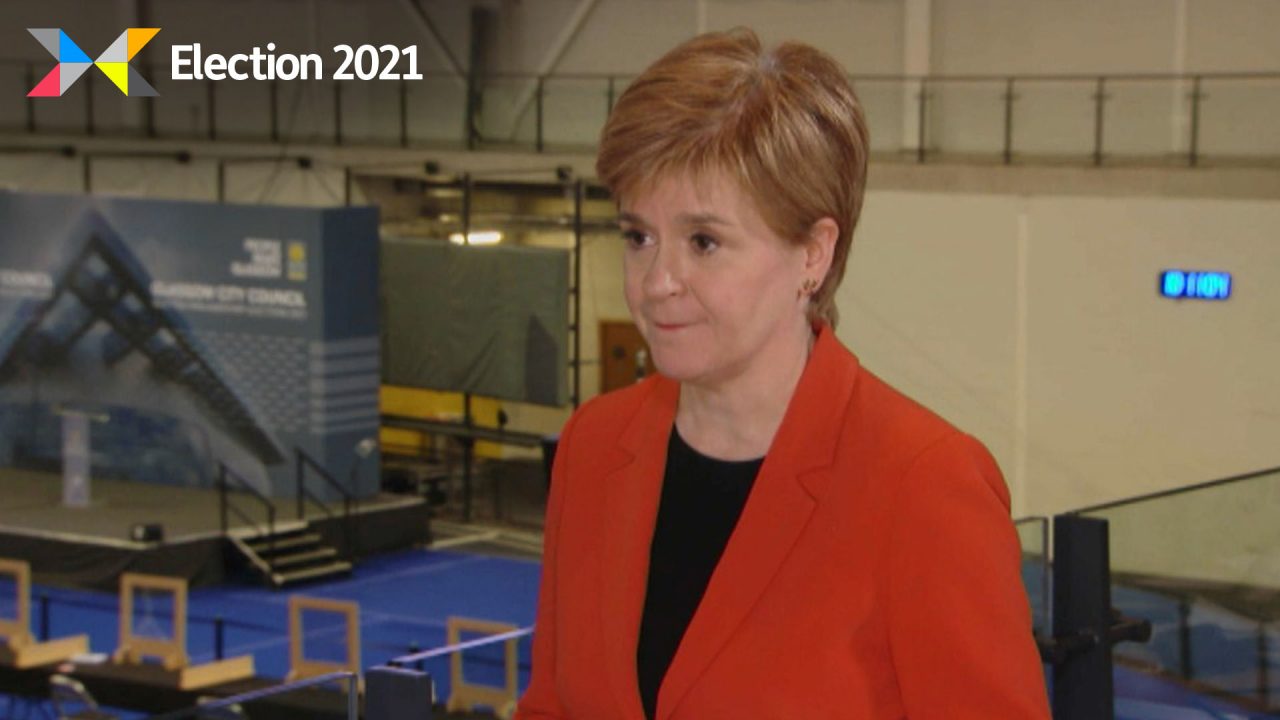 SNP leader Nicola Sturgeon has said she wants to hold a referendum on Scottish independence “when the time is right”, as she retained her Glasgow seat.

Giving an acceptance speech in Glasgow after she defeated Scottish Labour leader Anas Sarwar by 19,735 votes to 10,279, the First Minister said her party is set for a fourth term in power.

Earlier, she had played down the likelihood of an overall SNP majority at Holyrood, saying it has “always been a very, very long shot”.

After being re-elected to her seat, Sturgeon said: “If that is indeed the outcome of this election, I pledge today to get back to work immediately to continue to steer the country through the crisis of Covid, to continue to lead this country into recovery from Covid.

“And then, when the time is right, to offer this country the choice of a better future.”

The First Minister also took aim at elements of the far right who stood in the Glasgow Southside seat, including former Britain First deputy leader Jayda Fransen – whom Sturgeon had described as a “racist and a fascist” during a confrontation between the pair on election day.

Before the First Minister arrived at the Glasgow count, Scotland’s Justice Secretary Humza Yousaf said members of an anti-vaccine party had made a “beeline” for him due to his skin colour.

Derek Jackson, standing for the Liberal Party in Glasgow Southside, arrived at the count with supporters wearing black suits and yellow stars with “unvax” written on them, and claimed to be satirising “fascist SNP hate laws”.

After they approached Yousaf, members of other political parties joined the SNP to confront them.

Speaking to reporters after the incident, Yousaf said: “What I’m always struck by is voices of good always outweigh the voices of hatred.”

Members of the Scottish Liberal Party were later escorted from the count by security and police.

Meanwhile with more 30 seats declared across Scotland, just two have changed hands – the SNP took East Lothian from the Scottish Labour Party and also won Ayr from the Conservatives.

As he secured his Perthshire North seat, Deputy First Minister John Swinney said the SNP would be the “leading and largest party” in the new Scottish Parliament.

While he said there is a “long way to go” before all the results are known, Mr Swinney insisted it is “beyond any doubt” that the SNP will form the next government.

He added: “That is an absolutely gigantic feat for the Scottish National Party to have achieved, to be on the brink of a fourth continuous term.”

Elsewhere, former first minister and Alba Party leader Alex Salmond said the measure of his party’s success would be “our existence as a political party”, adding it is “here to say”.