It comes after a Scottish study found that the Omicron variant is less likely to result in hospital treatment. 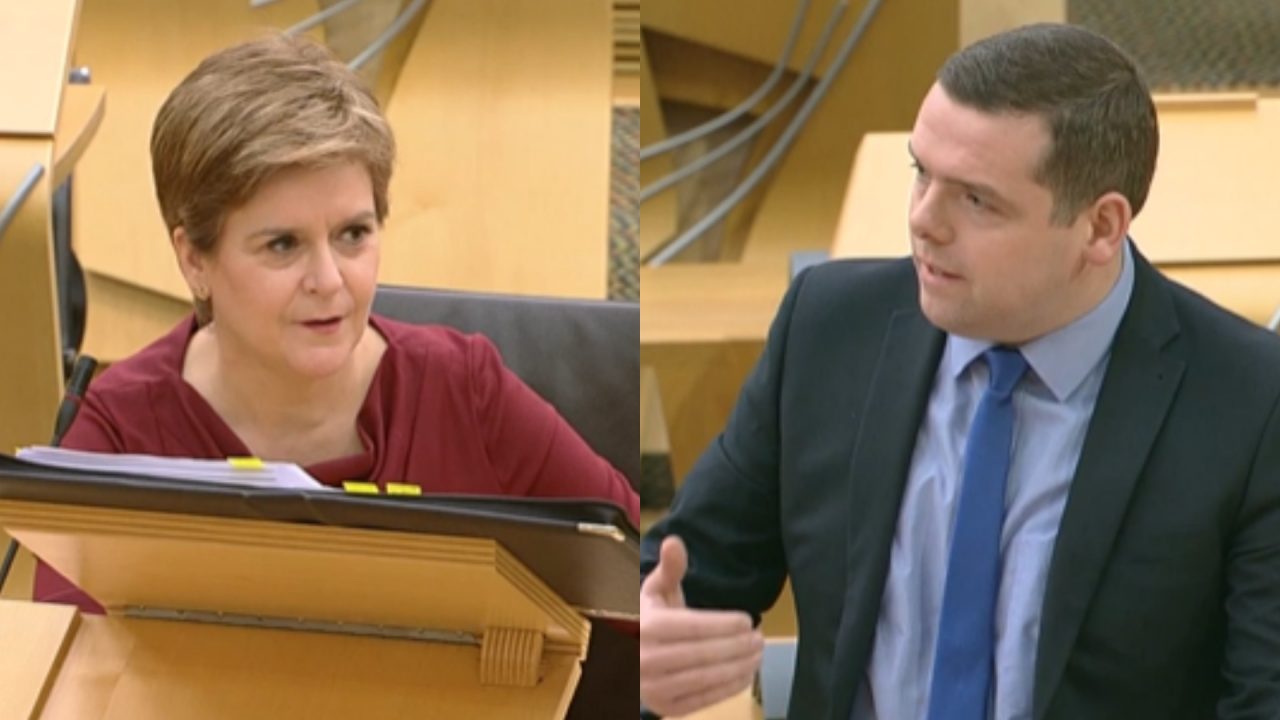 Nicola Sturgeon has been urged to consider easing the self-isolation requirement from ten to seven days.

At FMQs, Scottish Conservative leader Douglas Ross pointed to a study by Scottish researchers published on Wednesday suggesting that Omicron is less likely to result in hospital treatment.

He indicated that clinical advisers to the UK Government have also endorsed the move to reduce the self-isolation period to seven days.

In England, it was announced that from Wednesday, people will be able to end their self-isolation period after seven days providing that they receive negative results on a lateral flow device on days six and seven.

Raising the issue at Holyrood on Thursday, suggested that the findings of the Scottish study could provide a basis for the rules to be changed.

“The epidemiologist Irene Petersen said yesterday that a move to a seven day isolation period is a good idea.

“Clinical advisers for the UK Government have also endorsed the move.

“And yesterday, we had a game-changing Scottish study on Omicron, one of the most detailed and promising studies to date.

“And it said the evidence shows that Omicron is substantially less likely to result in Covid-19 hospitalisation than Delta.

“It confirms that the booster dose offers substantial additional protection and it suggests that, and I quote, ‘the reduced severity may also have implications for isolation rules’.

“First Minister, doesn’t this report, just published last night, give us the basis to change the rules now and avoid the risk of threatening the viability of essential services and our economy?”

The First Minister responded by explaining that the “difficult judgements” taken by the Scottish Government are informed by its clinical advisers.

She told Ross: “I’ll come onto the really encouraging study that was published yesterday in a moment and that is important, but, I also think it’s important that we get the timing of all of this right.

“And we are basing our very careful considerations on the advice that we are being given and of course that advice will continue to inform the difficult judgements that we take.”

The First Minister described the Scottish study, produced by experts from Edinburgh and Strathclyde Universities, as “really encouraging”.

“They are really encouraging because they suggest that the proportion of people with Omicron who are requiring hospital care might be lower and the estimates are between 30% and 70% lower risk of needing hospital care than with previous strains.

“That is all really good, but where we are right now, the care we’ve got to take is that we don’t allow the much higher transmissibility of Omicron to outweigh the benefits of perhaps its lower severity.”

She added: “We need to take care at this critical moment because if we allow the spread of Omicron to get too far ahead of us, then even if it is significantly less severe, that is going to overwhelm us.