First Minister has been accused by her predecessor of breaching the ministerial ethics code. 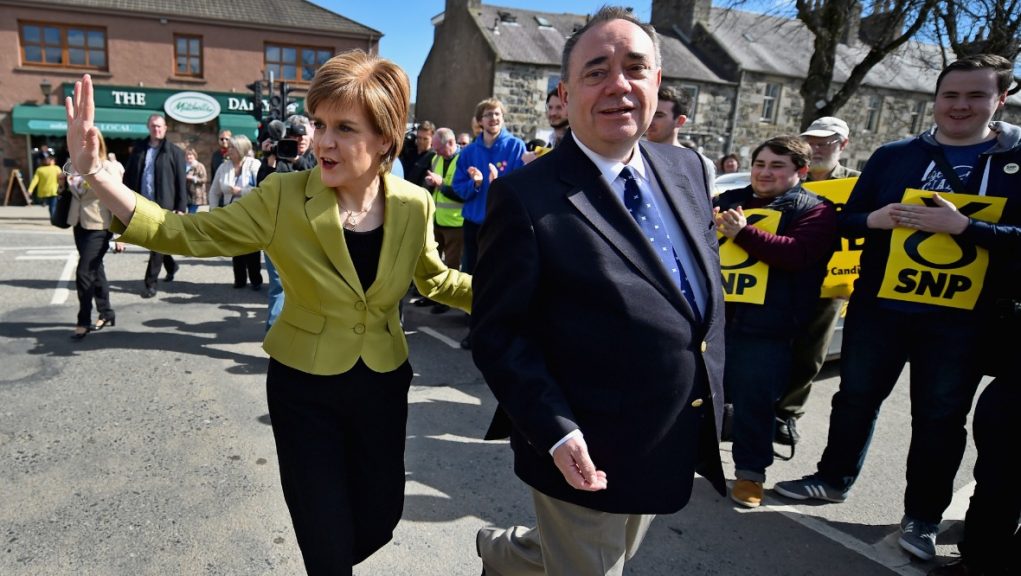 Nicola Sturgeon says she doesn’t believe her predecessor Alex Salmond can show evidence of a conspiracy against him because his claims are “not true”.

Salmond is accusing the First Minister of breaching the ministerial code and misleading the Scottish Parliament.

A Holyrood committee is probing the Scottish Government’s botched handling of harassment allegations against him – which saw Salmond win a £512,000 payout following a case at the Court of Session in Edinburgh.

Salmond claims “parliament has been repeatedly misled on a number of occasions” about a meeting he had with Sturgeon at her home on April 2, 2018.

But the current First Minister told STV News that her predecessor had tabled no evidence for that or his other claims.

Sturgeon said: “He (Salmond) has made claims, or he appears to be making claims or suggestions there was some kind of conspiracy against him or concerted campaign against him, there is not a shred of evidence about that, so this is the opportunity for him to replace insinuation and assertion with evidence.”

“I don’t believe he can because I know what he is saying is not true but the burden of proof is on him. If he can’t provide that evidence he should stop making these claims about people because they’re not fair and deeply distressing.

A key Holyrood body ruled last week that a submission from Salmond – in which he alleges Sturgeon broke the ministerial code – could be published.

The Scottish Parliamentary Corporate Body (SPCB) concluded “on balance” that it would be “possible” for the document to be published.

As a result, Salmond is now scheduled to give evidence on Wednesday to the Holyrood committee, with Sturgeon expected to have her say a week later.

A separate investigation is looking specifically at a potential breach of the ministerial ethics code by Sturgeon, who has repeatedly denied misleading parliament.

A breach would normally expect a minister to offer their resignation.

The First Minister said on Monday: “I haven’t breached the ministerial code but that’s a matter for the independent adviser on the code to determine and I will robustly refute any suggestions that I have done so, and I am not going to get ahead of that and start to talk in a hypothetical sense.

“In terms of the committee inquiry, I am actually quite relieved it is getting to this stage, it’s been a long time coming. My own appearance before it I think has been postponed four or five times, so next week hopefully I get the opportunity to address all of the claims that have been made about me and subject myself to legitimate scrutiny.

“The Scottish Government, of course, made a mistake in this. But this week it’s an opportunity for Alex Salmond – I hope he will come to the committee on Wednesday.”

“The people he is accusing of this are not just women who brought forward complaints – first and foremost – but also people who have given years, sometimes decades, of public service to Alex Salmond.

“It’s not fair to make these claims unless he has the hard evidence to back them up, which I don’t believe he does.”

One of the key issues under scrutiny by the committee is when Sturgeon first learned of the complaints against Salmond.

Sturgeon, who took over as First Minister and SNP leader in late 2014, initially told Holyrood she first heard of complaints of sexual misconduct against her predecessor at a meeting with him in her home on April 2, 2018.

But in Salmond’s subsequent criminal trial, it was revealed Sturgeon had been made aware of the allegations in an informal meeting with his former chief of staff Geoff Aberdein on March 29 that year – four days earlier – with Sturgeon later telling the inquiry she “forgot” about the encounter.

Sturgeon said: “Alex Salmond came to my home on the 2nd of April, 2018. He told me in quite gory detail what he was accused of – perhaps even more notably he gave me an account of one of those incidents.

“Now, an issue has been raised about a meeting I had with his former chief of staff three days before that.

Scottish Conservative leader Douglas Ross said Sturgeon “sets up a straw man every time she is asked about what she knew and when of sexual misconduct claims involving Alex Salmond”.

He said: “This isn’t about a conspiracy, as she and other SNP figures have repeatedly suggested, at every opportunity they get.

“It’s about whether the First Minister mislead the Scottish Parliament and broke the Ministerial Code.

“Nicola Sturgeon is not only asking the public to believe that she forgot about a secret meeting where she apparently learned for the first time of sexual harassment complaints against her friend of 30 years, she’s now insisting that the meeting ‘never held any significance’ to her.

“If that really was the moment she found out, then it’s absurd to try and claim that it was an insignificant meeting.

“The ruling party of government failed women and lost more than £500,000 of taxpayers’ money. That’s what this inquiry is about. Not the SNP civil war or any conspiracy theory.”

This is a pre-emptive strike against her predecessor.

She expects some serious allegations in Alex Salmond’s written evidence and when he faces MSPs on Wednesday. She says there is not a shred of evidence that there was a conspiracy against him.

We are still waiting on his written evidence being published – the committee members expect that today, they expected it hours ago.

If that is published Alex Salmond will have his day in Parliament on Wednesday.