Sturgeon tells PM not to block Indyref2 after election win

The SNP leader claimed an 'emphatic victory' in the Holyrood election on Saturday afternoon. 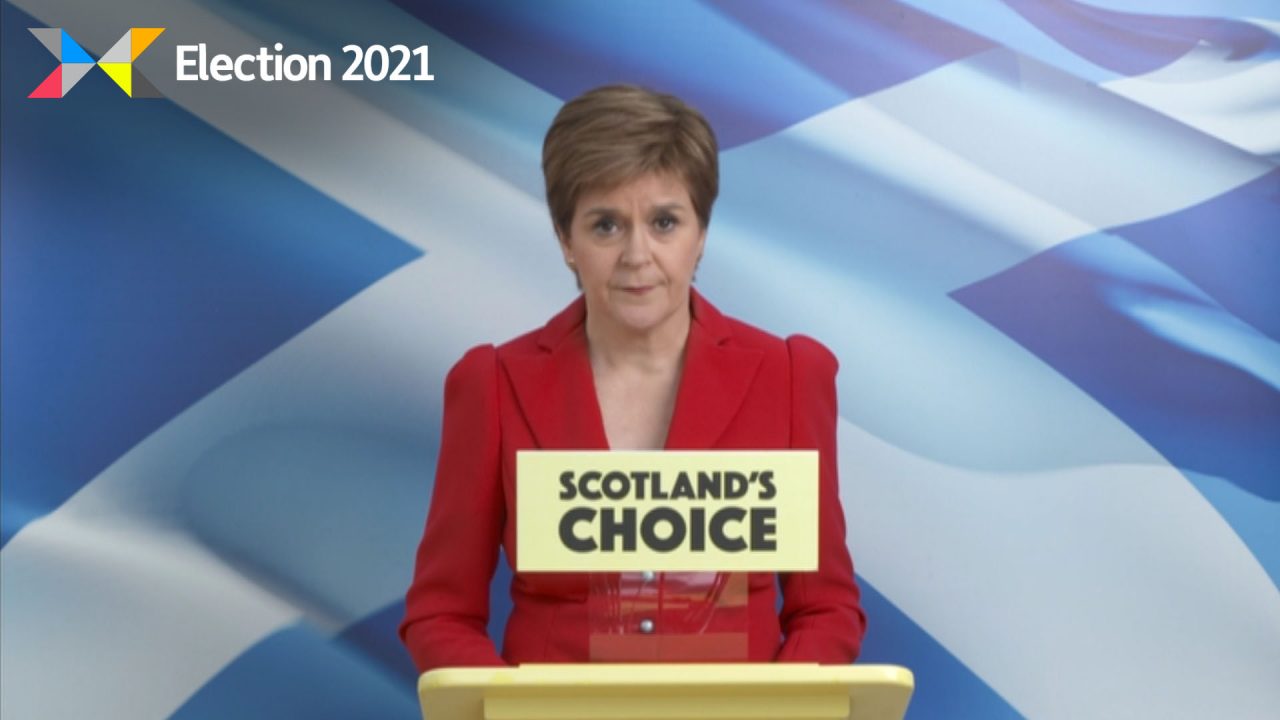 Nicola Sturgeon has insisted that Westminster has no right to block a second vote on Scottish independence as she claimed an “emphatic victory” in the Holyrood election – despite the SNP failing to secure an overall majority.

Sturgeon insisted that her chances of winning an overall majority, which declined dramatically after the SNP failed to capture Aberdeenshire West from the Tories, had always been a “long shot”.

With the SNP having made some gains in constituencies – such as former Westminster leader Angus Robertson taking Edinburgh Central – and with the party’s Kaukab Stewart becoming the first woman of colour to be elected as an MSP, Sturgeon declared she was “thrilled” with the results.

“By any standard this is a historic achievement, a quite extraordinary achievement for the SNP – our vote share is up, the vote share of the other main parties is down.

“So the SNP has won this election emphatically, the message we took to the people has been endorsed, and I now intend to get back to work to deliver on all of what we put to the Scottish people.”

The SNP has pledged to hold a second independence referendum, with Sturgeon having already said she wants this vote to be held before the end of 2023.

Prime Minister Boris Johnson has however insisted it would be “irresponsible and reckless” to have such a ballot as Britain emerges from the coronavirus crisis.

He told the the Daily Telegraph his impression was that Scottish voters had “moved away from the idea of a referendum”.

And when asked what he would do if Sturgeon attempted to hold one without a Section 30 order from Westminster granting permission, Johnson insisted there was “no case now for such a thing”.

But with Holyrood now certain to have a pro-independence majority, made up of SNP and Green MSPs, Sturgeon said Westminster must not stand in the way of such a ballot.

She stated: “It looks as though it is beyond any doubt that there will be a pro-independence majority in the Scottish Parliament and by any normal standard of democracy that majority should have the commitments it made to the people of Scotland honoured.

“And secondly, you will not succeed. The only people who can decide the future of Scotland are the Scottish people and no Westminster politician can or should stand in the way of that.”

“We think it is a clear mandate to at least go back to the Scottish people and ask the question, to have an actual conversation about what kind of country we want to be.”

Her comments came as the regional list seats started to be declared, with the Scottish Greens picking up a seat in Central Scotland for the first time ever.

Earlier on in the day, the Tories had held the key seats of both Aberdeenshire West and Galloway and West Dumfries.

And while Sturgeon’s party made other gains in the constituency votes at Holyrood on Friday, their success in gaining Ayr and East Lothian, from the Tories and Labour respectively, will see them lose MSPs from the South of Scotland regional list.

The coronavirus pandemic meant traditional overnight counts were abandoned after Thursday’s Scottish Parliament election, with counting instead taking place on Friday and Saturday.

Sturgeon, who comfortably defeated Scottish Labour leader Anas Sarwar to claim Glasgow Southside, said afterwards her initial focus would be “to get back to work to steer the country through the crisis and into recovery”.

She added: “That remains the case. But once the crisis is over, and if there is a majority in the parliament for an independence referendum, people should have the right to choose our future. Scotland’s future should always be in Scotland’s hands.”

Meanwhile, former first minister Alex Salmond conceded it is unlikely his new Alba Party will take seats in this election.

“But in some of the big ballot boxes, I think we ended up over 3% in Aberdeenshire East, the same in Banff and Buchan, a bit more actually, which I’m pleased with because these are our best results in Scotland.

“But that doesn’t get you a seat. You need 4.5%, maybe 5%, to get a seat. But nonetheless it’s a creditable performance for a party which has just celebrated its sixth birthday – in other words, we are six weeks old.”