Douglas Ross says party will push forward a vote of no confidence in the First Minister next week. 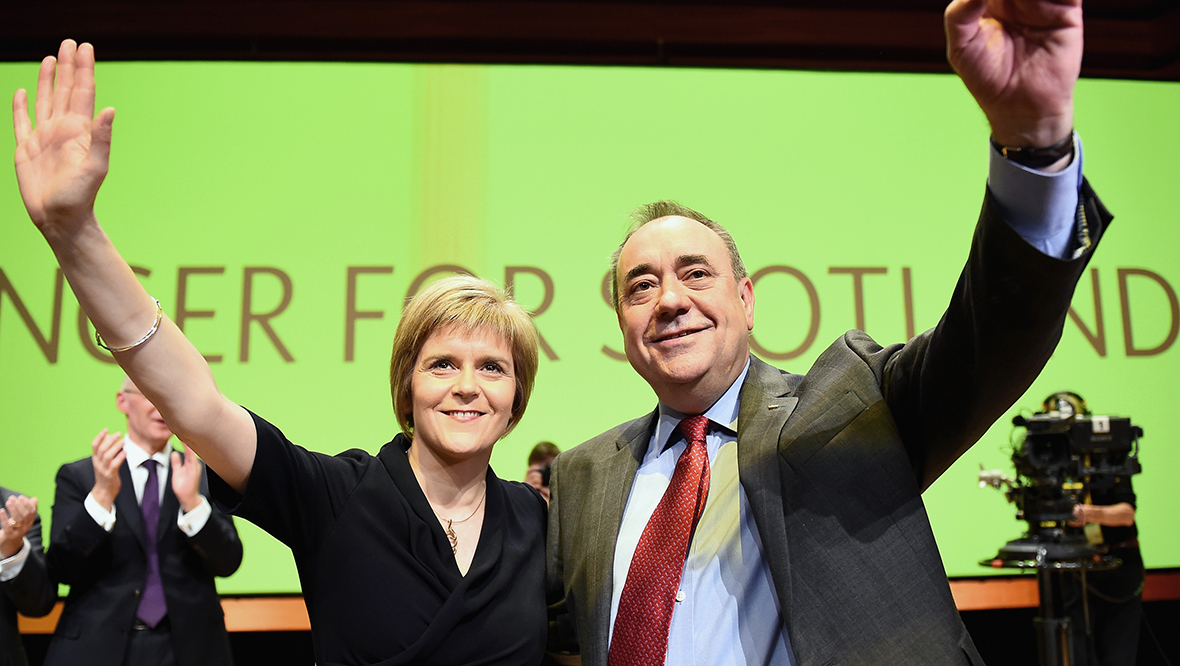 The leader of the Scottish Conservatives says Nicola Sturgeon “has to resign” as First Minister after sources revealed the Alex Salmond inquiry concluded she misled parliament.

The committee’s final report has not yet been published, but Douglas Ross told STV News the evidence submitted to the inquiry “confirmed” that the First Minister “had been untruthful”.

MSPs on the Scottish Government Handling of Harassment Complaints Committee voted 5-4 that the First Minister gave an “inaccurate” account of a meeting with her predecessor Alex Salmond during the live investigation, STV News understands.

The inquiry is also understood to have concluded it is “hard to believe” Sturgeon did not know of concerns about her predecessor’s behaviour before November 2017, as she claimed.

Sturgeon has claimed she was informed about a media inquiry relating to Salmond’s alleged behaviour towards female Edinburgh Airport staff in November 2017 and that was the first she had ever heard of his potential inappropriate behaviour.

The committee also believes Sturgeon should have acted upon any information about her predecessor’s conduct and is “concerned” about the meetings Sturgeon had with Salmond after he revealed he was being investigated, and why it took the First Minister more than two months to tell the head of Scotland’s civil service what she knew.

Sturgeon said a “very partisan leak” from the inquiry is “not that surprising”, adding that she stands by the evidence she gave to the committee.

She also said she is awaiting the result of the separate James Hamilton QC investigation into whether she broke the ministerial code.

Ross told STV News: “We’ll read the full committee report and their findings when it’s published in the next few days but the Scottish Conservatives have been clear for weeks that the evidence submitted to the inquiry confirmed that Nicola Sturgeon had been untruthful, she had misled parliament and, therefore, she has to resign.

“That’s what we’ve been saying for weeks because the evidence has been clear.

“I don’t believe the word ‘knowingly’ makes a big difference because Nicola Sturgeon has misled parliament, she has not been truthful with the people of Scotland and we expect the highest standards of the holder of the highest office in the land.

The Scottish Conservatives intend to push forward a vote of no confidence in the First Minister next week.

“We will be doing that, we’ve said the evidence has been clear – it’s been growing, it’s been mounting – against Nicola Sturgeon that she has misled Parliament.”

A Scottish Parliament spokeswoman said the committee – which has four SNP members and five from other parties – was still considering its report, which is expected to be published on Tuesday.

Sturgeon told Sky News: “I stand by all of the evidence I gave to the committee, all eight hours’ worth of evidence.

“What’s been clear is that opposition members of this committee made their minds up about me before I muttered a single word of evidence, their public comments have made that clear.

“So this leak from the committee – very partisan leak – before they’ve finalised the report is not that surprising.”

She added that she is awaiting the result of the James Hamilton QC investigation into whether she broke the ministerial code.

The decision is likely to increase pressure on Ms Sturgeon to stand down before May’s election, although it is unclear whether the act was deemed a resignation-worthy offence.

The SNP leader has faced questions about when she became aware of the internal government investigation of her predecessor, having originally told parliament it was at a meeting with him at her home on April 2.

It later emerged that Salmond’s former chief of staff had spoken to Sturgeon about – in her words – “a harassment-type issue” four days earlier when arranging the subsequent meeting.

She told the committee she wished her memory of the earlier meeting was “more vivid”, but “it was the detail of the complaints under the procedure that I was given on April 2 that was significant and indeed shocking”.

Sturgeon also defended her decision not to record the meeting, as per the ministerial code, because she initially suspected it was about party business and then wanted to protect the “confidentiality of the process”.

Salmond’s claim there was “no doubt” their meeting was about the government investigation was corroborated by Duncan Hamilton QC – a former SNP MSP – and the SNP’s former communications director, Kevin Pringle.

This latest development comes after Conservative MP David Davis used parliamentary privilege in the House of Commons to read out messages that he suggested showed a “concerted effort by senior members of the SNP to encourage complaints” against the former first minister.

According to Davis, the messages disclosed by a whistleblower “demands serious investigation”, with one alleging the investigating officer in the case complained of interference by Ms Sturgeon’s chief of staff.

The message is alleged to have been sent by Judith Mackinnon to the government’s communications director on February 6, 2018, almost two months before the First Minister claims to have first known about the investigation of her predecessor.

“It is clear from past public statements that opposition members of this committee had prejudged the First Minister at the outset of the inquiry and before hearing a word of her evidence, so this partisan and selective briefing – before the committee has actually published its final report – is hardly surprising.

“The question of the First Minister’s adherence to the ministerial code is being considered independently by James Hamilton, and we expect to receive and publish his report soon.”

Scottish Labour leader Anas Sarwar said: “I am not going to prejudge the outcome of the committee report and we await its findings, but if it does conclude that the First Minister has misled parliament and potentially breached the ministerial code then that is incredibly serious.”

The party’s UK leader also criticised Sturgeon as he visited Scotland on Friday.

Sir Keir Starmer said: “By making those comments before she’s seen the report, she’s doing the very thing that she’s accusing others of.

“The right thing for her to do is to wait for the report and to read the report – as we all will.

“But to say now, several days beforehand, what she said about the outcome is to do exactly what she’s accusing other people of doing.

“So I think the right thing to do is to wait for the report. If the report does come to serious findings then they have implications.”

Patrick Harvie, leader of the Scottish Greens, criticised committee members and said they had broken the MSP code of conduct by giving interviews before the report is published.

He said: “The Scottish Greens have said throughout that we will examine both the committee report and the Hamilton ministerial code inquiry before drawing any conclusions.

“Despite the indefensible behaviour of members of the committee we are still willing to do so, but their actions have clearly destroyed the credibility of their own report before anyone has had the chance to read it.”