Sturgeon: Government plans to hold Indyref2 vote by end of 2023

First Minister says officials will resume work on a 'detailed prospectus' in favour of Scottish independence. 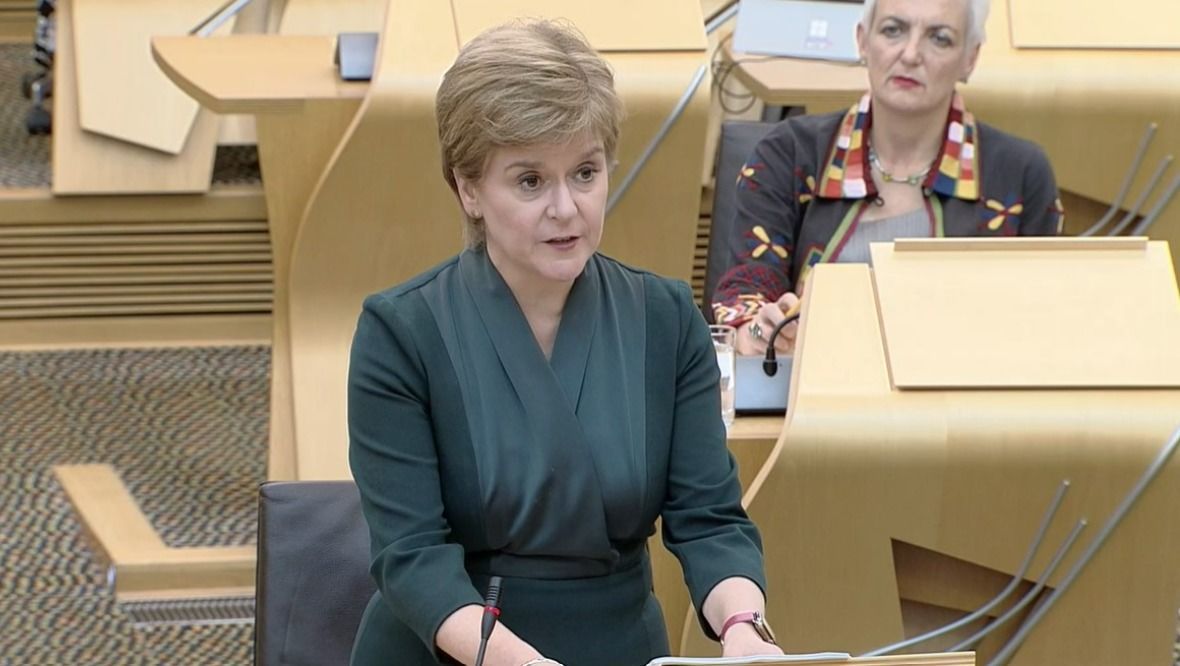 The Scottish Government intends to hold a second independence referendum by the end of 2023.

Addressing the Scottish Parliament, First Minister Nicola Sturgeon said work will now restart on the detailed prospectus that “will guide the decision”.

Sturgeon was speaking as she set out the Scottish Government’s plans for the coming year.

She said: “As we emerge from the pandemic, choices fall to be made that will shape our economy and our society for decades to come. Which parliament – Westminster or Holyrood – should make these choices and what principles will they be guided by?

“These are questions which cannot be avoided nor postponed until the die is already cast, so we intend to offer the choice.

“We will do so only when the Covid crisis is past but our aim – Covid permitting – is that it will be in the first half of this parliament, before the end of 2023.

“And crucially we will ensure that the choice when it does come is a fully-informed one. The case for independence is a strong one and we will present it openly, frankly, and with confidence and ambition.”

The First Minister also confirmed the government will introduce legislation for a National Care Service, describing it as “the most significant public service reform since the creation of the National Health Service”.

Funding for social care would also increase by £800m over the five years of this parliament, a rise of 25% and remove charges for non-residential care.

Outlining the Programme for Government, Sturgeon said: “The establishment of the National Care Service will spark much debate and it is vital that we get it right.

“But done well, as we intend, a National Care Service will be one of the biggest ever achievements of this parliament – and, just like the NHS in the wake of the Second World War, it will be a fitting legacy from the trauma of Covid.”

Reforms to gender recognition will go ahead within the next year, Sturgeon also announced.

Confirming that a Gender Recognition Reform Bill would be brought before parliament, the SNP leader acknowledged many people had “sincerely held concerns” about the plans.

Explaining the proposals, she said: “It will make the existing process of gender recognition less degrading, intrusive and traumatic.

“In other words, it will make life easier for one of the most stigmatized minorities in our society. I think that is something any parliament should feel a responsibility to do.

“What it will not do is remove any of the legal protections that women currently have.

“We should never forget that the biggest threats to women’s safety come – as has always been the case – from abusive and predatory men; from deep-seated sexism and misogyny; and, in some parts of the world, from lawmakers intent on taking away basic freedoms and removing the rights of women to control our own bodies.”

KEY POINTS IN PROGRAMME FOR GOVERNMENT

The Scottish Government has struck a “ground-breaking” power-sharing deal with the Greens.

Sturgeon said last week a “key strand” of the co-operation agreement is fulfilling what she describs as the “democratic mandate to let the Scottish people choose our own future”.

He said: “Separating Scotland is the top priority for her government, not our recovery (from Covid). Their focus is on a referendum, not the future of Scotland getting through this pandemic.

“This government should be pouring every single bit of time and effort into our economy, into tackling drug deaths, and into remobilsing our NHS. But no, they put independence at the forefront again.

“Instead the government will start work on a detailed prospectus for an independent Scotland, taking time and resources away from the priorities that they should be focusing on to another independence referendum.”

“This may surprise the First Minister but there are ideas bigger than independence.”

Scottish Labour Leader Anas Sarwar said the Programme for Government was “tired and rehashed” from a party that “has clearly run out of big ideas”.

He said: “We are up against a global pandemic, a growing healthcare crisis, a jobs crisis and a climate emergency – there is no time to waste.

“And this may surprise the First Minister but there are ideas bigger than independence.

“What we have seen in this Programme for Government is just another example of a pattern that defines the SNP’s approach.

“Promise big, never deliver, blame someone else and hope people have forgotten about it when you get round to promising it again. Frankly, Scotland deserves better.”

“Independence will starve everything else of oxygen when people need Parliament to set aside the battles of the past and work together.”