Students away from home can’t stay with parents overnight

Students can return home on a 'long-term basis' but not for short overnight stays, new guidance says. 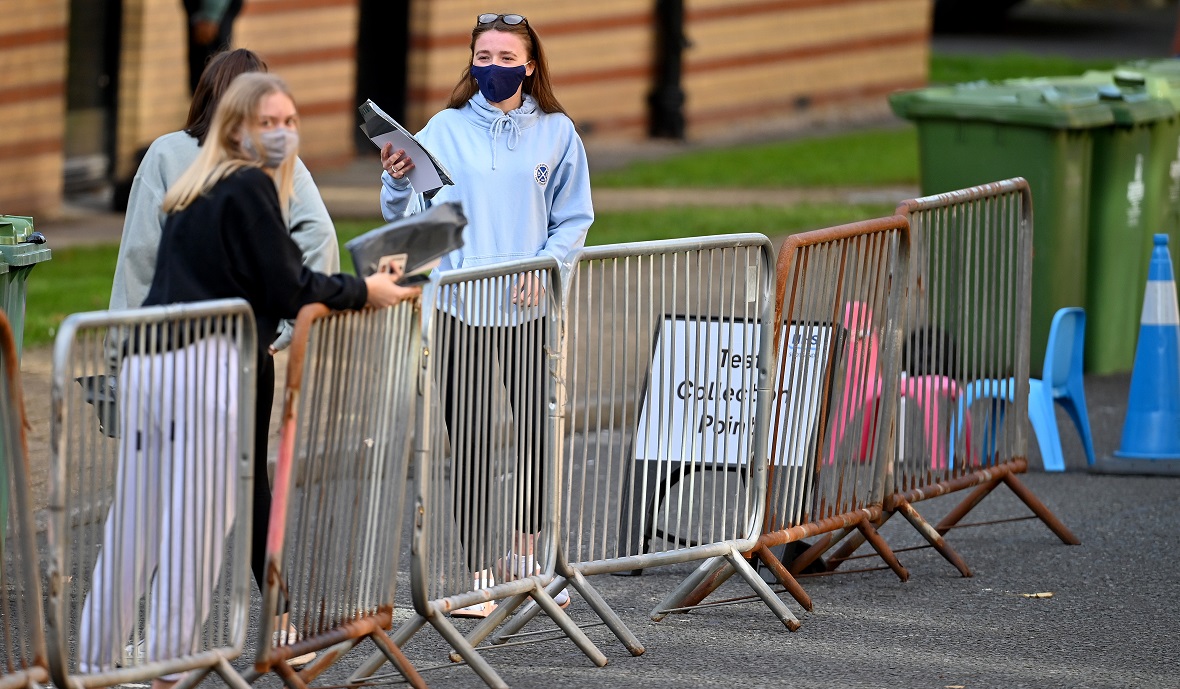 Students living away from home cannot have short overnight stays at their parents’ house, the First Minister has confirmed.

Guidance published on Sunday said students currently living in university accommodation will be able to return home on a “long-term basis” if they wish.

But speaking at Monday’s coronavirus briefing, Nicola Sturgeon said short-term stays should be avoided – with a small number of exceptions, such as being a carer, childcare or a family emergency.

She said this is not a rule particular to students but that everyone in Scotland must avoid meeting people from other households in their homes, as per current restrictions.

However, students, like everyone else, can still see relatives outdoors, including in private gardens, or indoors in public places like cafes or restaurants.

It comes after students were banned from pubs, restaurants and cafes over the weekend and from socialising outside their accommodation for the weekend to try to stem a wave of campus coronavirus cases.

Monday reported the lowest number of Covid-19 cases in ten days – a total of 222 – after a weekend which saw more than 1000 new infections confirmed in Scotland.

But Sturgeon warned the number of cases is “lower than we would have expected” and could be down to a “weekend effect”.

No new deaths of patients confirmed to have coronavirus have been reported in the last 24 hours, she added.

However, the number of people with the virus admitted to hospital rose by 16% overnight, up 17 to 122.

Of these patients, 16 were in intensive care, an increase of four.

Sturgeon said hospital admissions may not be rising as sharply as earlier in the pandemic, but they have still more than doubled in less than a fortnight.

She told the briefing: “I still occasionally hear that the rise in cases that we have seen in recent weeks is nothing to worry about because the number of people in hospital is not rising as steeply…

“The number of people in hospital is rising and nobody should be under any illusion about that.

“I don’t say this to alarm or worry people unduly but I say it to, I hope, make everybody realise that we have to take this rise in cases seriously and do all of the things that are being asked of all of us to try and stem that rise and bring Covid back under control.

“Just as was the case earlier this year, not getting Covid back under control will result in lives being lost and none of us want to see that.”

Addressing the latest campus guidance, the First Minister said that students told to self-isolate should “ideally” stay in their accommodation while doing so.

But she added that struggling students may move to another household, such as to stay with family, to complete their quarantine period.

This is “not a decision to be taken lightly”, the FM said, and should be cleared with the university or college first.

Anyone who chooses to move home while self-isolating should avoid public transport, she added.

“Crucially the other members of your new household – that’s your mum, dad, brothers, sisters of all ages – will have to self-isolate for 14 days from the time you arrive home,” Sturgeon emphasised.

The First Minister offered a “big thank you” to students, saying the “vast majority” of them had followed the rules over the weekend.

She said: “Sticking to guidelines like that isn’t easy especially in the early days of a university term but it will make a difference.

“The incubation period for this virus means I am absolutely sure that we will continue to see increased numbers of infections amongst students for several days to come and there will always be a need for vigilance.

“But the responsibility that has been shown over the past few days will help our efforts to stem this spread and I want to say thank you for that.”