Indoor play centres have been closed for more than 14 months across Scotland due to restrictions. 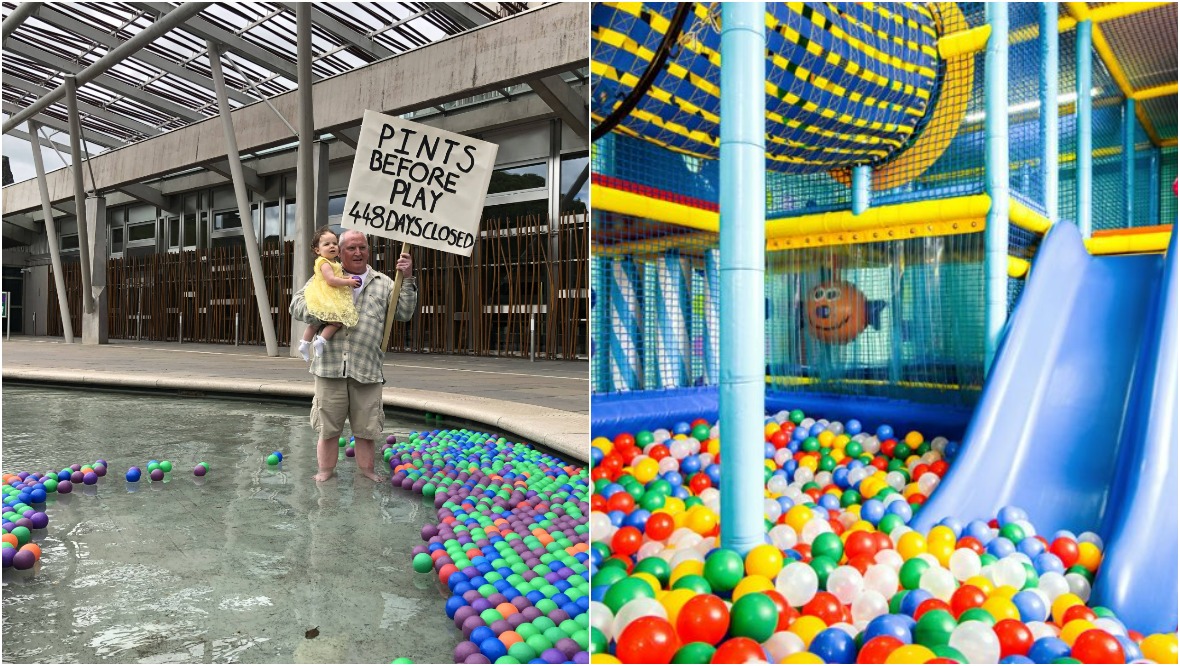 Soft play business owners are holding a protest outside the Scottish parliament on Tuesday after being forced to close for more than a year.

Having shut in the country’s first lockdown in March 2020, there have been several proposed and then missed reopening dates.

As fifteen council areas in Scotland moved to level one on Saturday, fourteen, including Glasgow, Dundee and Edinburgh, remained with tighter restrictions under level two.

Sarah Davidson, owner of the Whale of A Time play centre in Glasgow, told STV News: “With the majority of the country thinking we were getting to level one last week and then for the majority of us not, it’s disappointing.

“There are very similar businesses, like trampoline parks, role-play cafes, indoor bowling, all allowed to trade in level three and level two but we’re not allowed to reopen.

“The government cannot give us any scientific reason.

“Thousand of fans can gather in fan zones for the Euros but I can’t have 30 children in a soft play.”

Ms Davidson said that her daughter has been able to return to her gymnastics lessons in a class covered in the same material as her play centre.

Soft play owners and managers are gathering outside Holyrood on Tuesday at 12pm to demand action from the Scottish Government.

Soft play centres in England were able to reopen in August last year, and Ms Davidson wants to know why it is safe there but not in Scotland.

She said: “There has been some financial support. None of us are expecting to get a grant to replace the revenue this last year but there are still bills to be paid.

“To be closed for 14 months, the support for us is woeful. It’s like they want us to disappear.

“We just want to trade, we want children back in our lives.”

Together with other soft play owners forced to close their businesses, Ms Davidson set up a group to organise the sector amid the impact of the pandemic last year.

Grants were made available to businesses required to close by law due to Covid-19 restrictions from November 2, 2020. Soft play centres were eligible and the government said had started to receive restart grants of up to £19,500.

Ms Davidson said she had applied for the restart grant, but said without a change in the level guidance for soft play it has been useless as she has been unable to reopen for weeks since receiving the funds.

“The restart grant is a complete joke considering I’ve been shut since I got it,” she told STV News.

The Scottish Government has also extended 100% non-domestic rates relief for retail, leisure, hospitality and aviation businesses for this financial year.

The Scottish Government also announced one-off grants for soft play centres of up to £50,000 last October through the Covid-19 Contingency Fund. Ms Davidson said trying to get a grant is “almost impossible”.

Nicola Sturgeon is set to give an update on the coronavirus pandemic later on Tuesday. A decision is expected this week on whether the Euro 2020 fan zone at Glasgow Green can go ahead as planned as the First Minister warns the country faces a “critical juncture” with Covid cases tripling in the past month.

A Scottish Government spokesperson said: “We do not underestimate the significant impact this pandemic has had on soft play centres across Scotland.

“The soft play centres in level one and zero areas can now re-open in line with updated guidance published on May 28. The finance secretary announced up to £12m additional funding for the 14 local authorities that are remaining in level two, including £100,000 for soft play centres which remain closed.

“As with all infection prevention measures, we will only have these restrictions in place as long as is necessary. We have always said we will keep plans under review and accelerate the lifting of restrictions if possible, and we will continue engaging with the soft play sector on this.”