The agreement means that the Scottish Government has an overall majority at Holyrood in favour of independence. 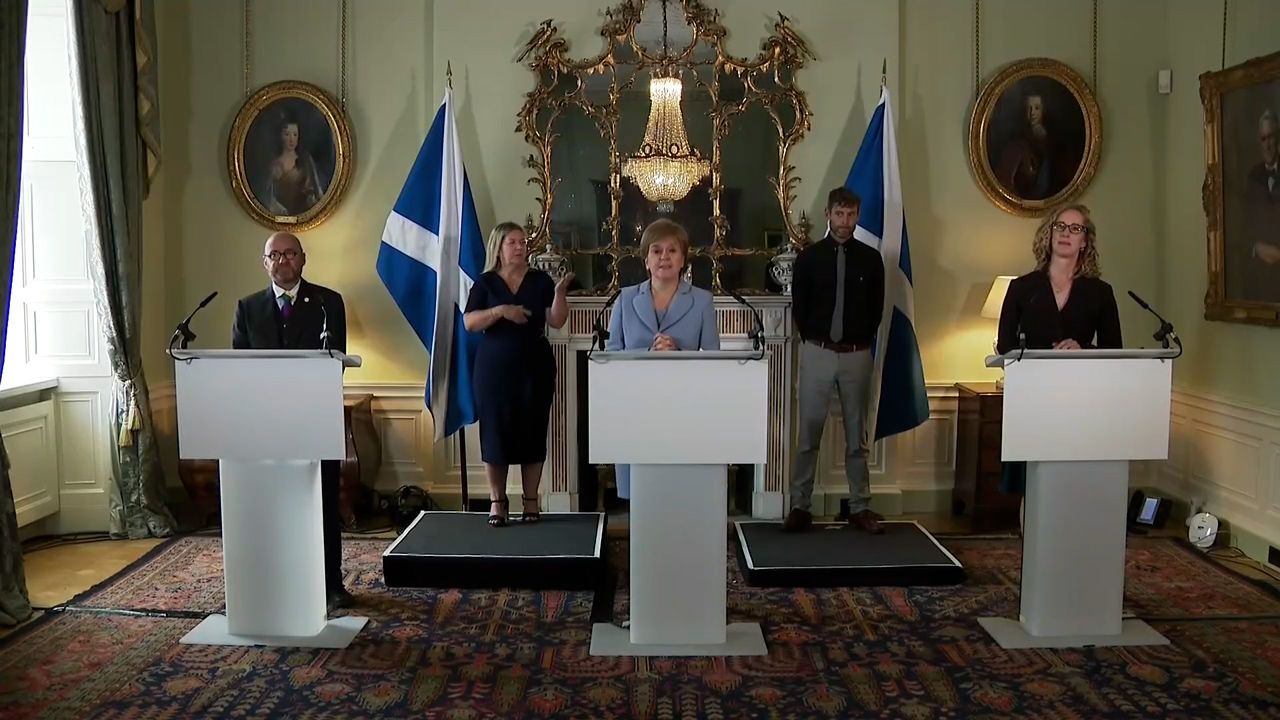 A deal has been struck between the SNP and the Scottish Greens – which will see the Greens move into government for the first time anywhere in the UK.

It comes after months of talks following the Scottish Parliament election in May, which saw the SNP fall one seat short of a majority, and the Greens win eight seats.

The agreement means that the Scottish Government has an overall majority at Holyrood in favour of Scottish independence.

There are currently seven Scottish Green MSPs, due to Alison Johnston having to give up her party affiliation in becoming the Presiding Officer at the Scottish Parliament.

On Friday morning, the Scottish Cabinet met virtually in order to confirm the deal, which is expected to see Scottish Green MSPs being handed ministerial positions.

The deal is not a formal coalition, but will see the parties share power.

In New Zealand, Green Party MPs have taken on ministerial portfolios while not being in an official coalition.

Amongst the commitments set out in the deal is the holding of an independence referendum after the coronavirus pandemic has passed, and within the current Parliamentary session.

It also commits to increased investment in active travel and public transport, and a ‘strengthened framework of support’ for the marine renewables and offshore wind sectors.

First Minister Nicola Sturgeon said although the parties do not agree on everything, they are “coming out of our comfort zones” to focus on what they do agree on.

“I am delighted that the Scottish Government has reached a ground-breaking agreement with the Scottish Green Party that meets the challenges and opportunities of our time,” she said.

“The challenges we face have rarely been greater – the climate emergency, recovery from a global pandemic and an assault by the UK government on the powers of our Parliament.

“Today’s politics can too often feel small – polarised, divided and incapable of meeting the moment – and this agreement is intended to change that in Scotland. It is about doing politics and governance better to find the solutions needed to solve the problems confronting the world today.

“The spirit of co-operation and consensus-building is very much in keeping with the founding principles of our Scottish Parliament. We do not agree on everything but we are coming out of our comfort zones to focus on what we do agree on.”

Sturgeon said that the agreement will also focus on green jobs, fair work, and a sustainable recovery from Covid.

She said: “The agreement delivers bold policy action on pressing issues. A commitment to more affordable housing, a better deal for tenants and action to tackle poverty and inequality.

“Steps to accelerate our transition to net zero – more support for active travel, transformation of home energy and a ten year transition fund for the North East of Scotland. A focus on green jobs and fair work – and a sustainable recovery from Covid.

“We also reaffirm in this Agreement our shared commitment to securing independence for Scotland, and to giving people the right to choose our country’s future through a referendum.

“It recognises that business as usual is not good enough – we need boldness, courage and a will to do things differently. That is what we offer.”

“This is a historic moment, which could not come at a more important time. We must build a fairer and compassionate country and we must do everything in our power to tackle the escalating climate and nature emergencies to deliver a just transition for all.

“That is what this deal will do. Fundamentally this is a new approach to politics. We agree on some things and disagree on others – those distinctive voices can and will remain.”

Green Party co-leader Lorna Slater outlined a pledge to work together to build a “greener, fairer and independent Scotland”.

She said: “The stakes could not be higher – with the COP26 climate conference coming to Glasgow, Scotland is in a position show real leadership on climate. But this deal is about people as well as the planet.

“Together, we would deliver a new deal for tenants, giving tenants more rights and introducing rent controls to help tackle Scotland’s housing crisis, create a new National Park, and much more.

“That’s why we are pledging to work together to build a greener, fairer and independent Scotland.”