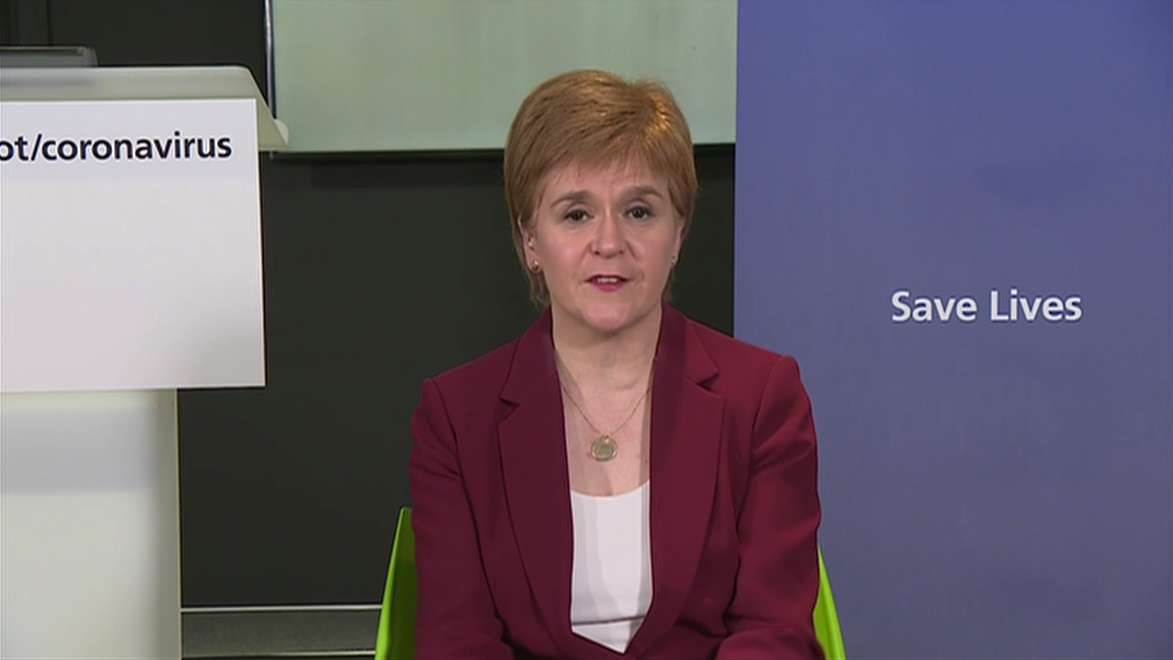 Scots have been urged against having “extremely high risk” indoor meetings with people from other households by the First Minister.

With the weather not forecast to be as good as last weekend, Nicola Sturgeon issued a reminder that only outdoor meetings – with one other household per day – are allowed.

She repeated advice that as well as not meeting people you don’t live with inside, you also should not hug or shake hands with them or share food, and you should keep two metres apart.

The FM called on people to find alternative ways to protest against racism and police brutality.

Joining her at the government’s St Andrew’s House headquarters, Police Scotland chief constable Iain Livingstone said he was “shocked” by the death of Mr Floyd in police custody in the US last month.

He also said the easing of some lockdown measures last week had made some people feel “a bit demob happy”.

It comes as the First Minister announced another 14 deaths of Covid-19 patients in Scotland, taking the total including suspected deaths to 3958.

There have been 29 new cases of the virus overnight, bringing the Scottish total since the pandemic began to 15,582.

But for the first time since March 30, there are fewer than 1000 people in hospital with coronavirus or coronavirus symptoms.

The First Minister hailed this as a sign of progress but warned it could quickly be reversed.

She said: “It’s by not doing the things that we know from the evidence allows the virus to spread more easily that we will keep it under control.

“To start, you mustn’t meet people from other households indoors.

“I know that might be a particular temptation on a weekend like this when we’re expecting, again, poor weather.”

But she stressed doing so would be “extremely high risk” as the virus “transmits much more easily between people inside than outside”.

Sturgeon added: “I’m not exaggerating when I say that if you do meet people from other households indoors, you’re putting yourselves and you’re putting them at risk of getting the virus, becoming ill from it, and potentially from dying with it.”

And in a specific plea to young people, the First Minister said: “If you start to feel your social life is returning to normal, that’s not a good sign.”

She went on: “Many of you, I know, will be desperate to spend more time with your pals after weeks of being apart.

“But I want to be very clear – you are not immune from this virus, you can get it and it can be very harmful to you.

“But even if you’re not seriously affected yourself, you can still pass it onto other young people.

“They might then pass it onto others who are at greater risk from Covid-19 such as their parents or grandparents and that could have really tragic consequences.”

The chief constable also urged people not to organise house parties or other indoor gatherings, saying police will “take very robust action” against those who do.

He said: “Don’t have house parties if the rain comes on.

“Don’t get your friends round. It is not the time to do that, it is literally putting lives at risk.”

Livingstone said the relationship between police and the public had gone from “strength to strength” during the pandemic, and most people “continue to do the right thing” by adhering to lockdown measures.

But he said the move into “phase one” of Scotland’s route map out of lockdown before the bank holiday weekend had led some people to be “a bit demob happy”.

“Gatherings at parks, beaches and beauty spots were concerning,” he added.

The chief constable also said crime not related to the Covid-19 measures was beginning to return to “business as usual” levels, with more than 1000 arrests made that did not concern the coronavirus regulations.

He also said he “fully understands the desire of people in Scotland to make their voices heard this weekend over racial injustice”.

Police Scotland has a duty to ensure people’s voices can be heard safely over the death of Mr Floyd, the Chief Constable said, but he added: “Please do this in a way that does not risk spreading coronavirus.”

Sturgeon echoed that call, urging Scots to find alternative ways to protest than the demonstrations planned in the coming days.

Mass gatherings at this stage of the pandemic “are simply not safe”, the First Minister said.