Former first minister says there was a 'malicious scheme' to damage his reputation. 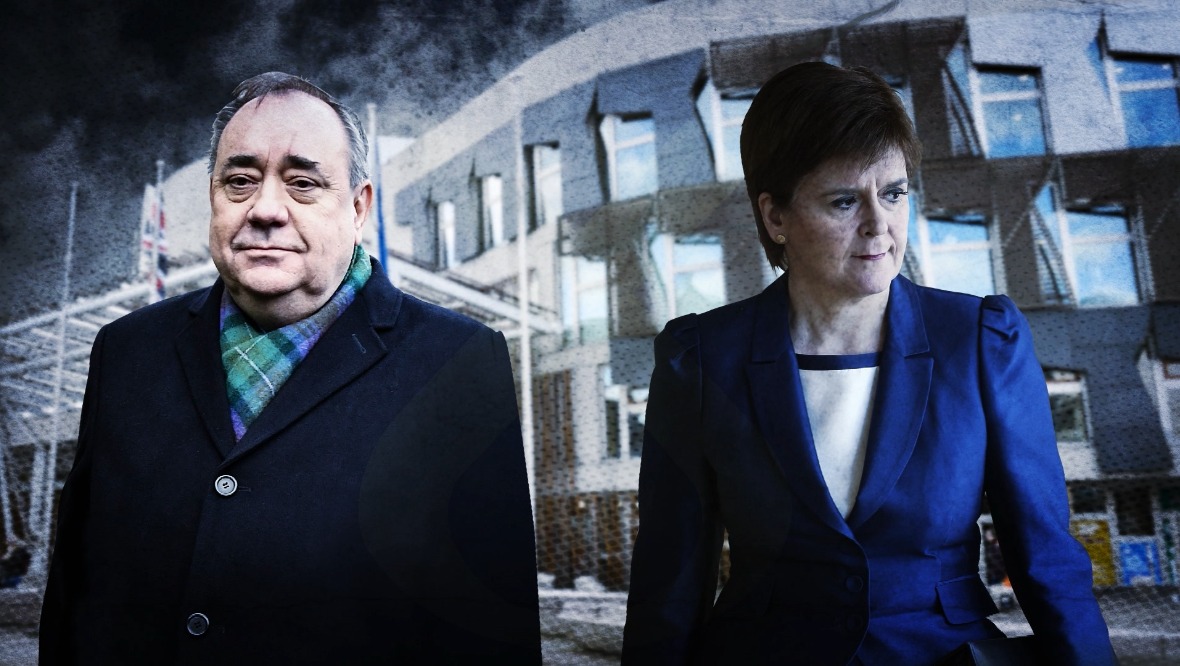 Alex Salmond claims there is “no doubt” Nicola Sturgeon has broken rules governing the behaviour of ministers, but stopped short of saying she should resign.

Giving evidence to the Holyrood inquiry into the Scottish Government’s unlawful investigation of sexual harassment claims against him, Salmond said Scotland’s “leadership has failed”.

The Court of Session ruled the Scottish Government’s investigation into complaints against him was “tainted by apparent bias” after it emerged the investigating officer had prior contact with two of the women who made complaints.

Salmond called for the Lord Advocate and the head of Scotland’s civil service, Permanent Secretary Leslie Evans, to resign over the handling of the complaints against him.

He alleged a “malicious scheme” among senior SNP figures to damage his reputation, but said he had no evidence the current first minister was part of this.

Salmond contradicted evidence from Sturgeon over key meetings on the complaints against him, and added: “I have no doubt that Nicola broke the ministerial code, but it’s not for me to suggest what the consequence should be.”

He said he did not believe she was involved in covering up complaints against him, but criticised her for using a Covid press conference to “effectively question the result of a jury”.

He declined to directly apologise for his own behaviour when asked.

In his opening statement to the committee on the Scottish Government Handling of Harassment Complaints on Friday, he told MSPs he believes the government’s actions are no longer true to the principles of openness, accountability and transparency.

He said the failures of leadership surrounding the investigation into his conduct are “many and obvious”.

He added: “The government acted illegally but somehow nobody is to blame. Scotland hasn’t failed, its leadership has failed.

“The importance of this inquiry is for each and every one of us to help put this right.

“This inquiry is not about me, I have already established the illegality of the actions of the Scottish Government in the Court of Session, and I have been acquitted of all criminal charges by a jury in the highest court in the land.

“The remit of this inquiry is about the actions of others, whose investigation into the conduct of ministers, the Permanent Secretary, civil servants and special advisers.

“It also requires to shine a light on the activities of the Crown Office.”

He went on to claim the committee has been “systematically deprived of the evidence it has legitimately sought” in its inquiry, later adding there was “deliberate suppression of information inconvenient to the government”.

He said his ability to give evidence has been “severely hampered” by the Crown Office, adding the “threat of prosecution made to me if I offered that evidence is, in my estimation, both extraordinary and unwarranted”.

The committee redacted parts of his written evidence previously published after the Crown Office raised concerns – something he said would not have happened at the House of Commons.

He said the previous two years and six months – during his investigation and criminal trial – had been a “nightmare”, but “we can’t turn that page, nor move on, until the decision-making which is undermining the system of government in Scotland is addressed”.

Questioned by Liberal Democrat MSP Alex Cole-Hamilton, Salmond said he did not believe Sturgeon had been involved in a “cover-up” of complaints against him.

He said: “I’ve seen it pursued on the committee that somehow Nicola Sturgeon was covering up – that’s not the case, my charges against Nicola Sturgeon don’t include that.”

Mr Cole-Hamilton added: “I want to ask, laying aside the charges of which you have been acquitted, and the allegations that you deny, of the behaviours that you have admitted to, some of which are appalling, are you sorry?”

Salmond replied: “In my statement I pointed out the Government’s illegality has had huge consequences for a number of people, and specifically mentioned the complainants in my opening statement.

“Over the last three years, there have been two court cases, two judges and a jury, and I’m resting on the proceedings of these cases.”

Labour’s Jackie Baillie asked the former first minister if the name of one of the complainers had been shared at a meeting his then chief of staff, Geoff Aberdein, had been present at.

Salmond said it had, adding: “My former chief of staff told me that.”

The former first minister also claimed a leak to the Daily Record newspaper, which broke news of the allegations against him, was “politically inspired”, as he called for police to act.

He added: “I think it does require further police investigation – I do believe I know the identity but I’m not here to speculate on individuals that I cannot substantiate.”

He will later face questions about his claims Ms Sturgeon misled Parliament and breached the ministerial code.

Salmond, who was acquitted of 13 charges of sexual assault in a criminal trial, was awarded a £512,250 payout after he successfully challenged the lawfulness of the government investigation into harassment claims made against him.

Sturgeon has previously insisted there is “not a shred of evidence” that there was a conspiracy against Salmond and she has denied lying to parliament.

She is scheduled to appear before the committee to give evidence next Wednesday.

The Scottish Conservatives said “devastating evidence” had left the SNP leadership “on the ropes”.

“The number of accusations of misleading parliament and breaking the ministerial code are extraordinary.

“The entire leadership of the ruling party of government are on the ropes.”