Ruth Davidson aiming to be ‘outspoken’ in new Lords role

The former Scottish Conservative leader will be introduced to the House of Lords on Tuesday. 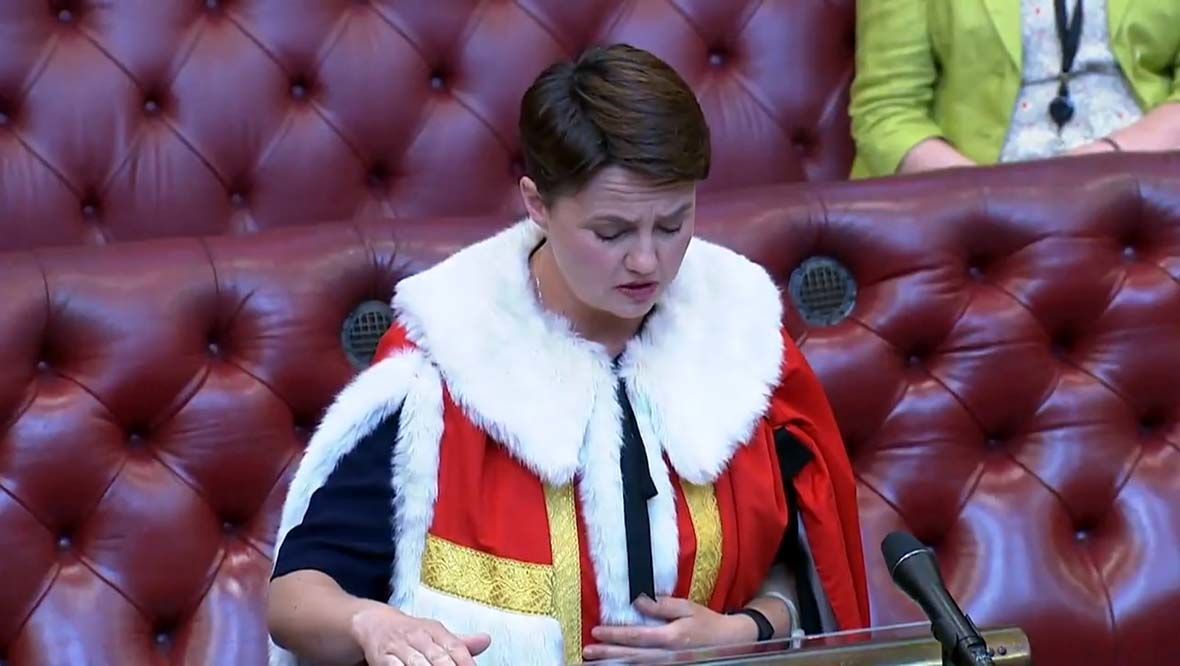 Ruth Davidson says she hopes she can continue to be “independent-minded and outspoken” in her new role in the House of Lords.

The former Scottish Conservative leader is set to be introduced as Baroness Davidson of Lundin Links when she takes up her seat at Westminster on Tuesday.

She chose the name as Lundin Links was the village in Fife that she grew up in and where her parents still live.

Davidson, who stood down as an MSP at the Holyrood election in May, said she is now looking forward to “doing good work” in her new role as a Peer.

“I believe what I believe and I don’t ever try and dress things up. You know, I’m pretty forthright.”

“I believe that the Scottish secretary Alister Jack put my name forward to it, in the same way as a lot of previous Scottish leaders, I think I’m the fifth to come out of Holyrood, having been put forward for it,” she said.

“I wasn’t sure I’d make it through all the different rounds, including being ticked off the list by Number 10, but I’m really pleased I am and I’m looking forward to doing good work in the Chamber.”

The appointment of Davidson was signed off by Boris Johnson, despite having criticised the Prime Minister, including most recently taking aim at his decision to cut foreign aid.

She said: “I think to be honest he’s shown himself to not bear grudges or anything like that, and I think it’s healthy within a political party that you can have people that disagree on issues.

“And where I support the Prime Minister, where I think he’s done a good job like allowing Hong Kong British Overseas passport holders to have access and a pathway to British citizenship, I’ve said that.

“Tackling online harms, which is a big issue of our day, I’ve said that. Where I do disagree with him, like cutting overseas aid, I’ve said that too.

“And I hope to continue to be independent-minded and outspoken in my new role.”

The former Scottish Conservative leader said that she wants to be able to continue to speak her mind in the House of Lords.

She said: “I believe what I believe and I don’t ever try and dress things up. You know, I’m pretty forthright.

“I think that I speak my mind, I want to continue to do that and I think that there’s a role for people both within and outwith political parties to do that.

“And when other parties who have rules that say you can’t ever disagree with those in charge criticise people for that independence of thought, I think that’s a bit cheeky.”

Davidson also ruled out any suggestions that she could become the new Scottish secretary.

“I’m not planning on doing a big job until my son, and if we are blessed with any other little brothers and sisters for Finn, get to school.

“I have got a job of work to do here, I want to do it well, but I’m not planning any big jobs.”

Asked about the prospect of a future independence referendum, Davidson said she would continue to campaign for Scotland to stay as part of the UK.

She said: “I think every Scot should speak up for what they believe in, on either side of the argument, and I will always do so.

“And I believe in Scotland’s place in the United Kingdom and I’ll be part of any campaign in the future.”

Davidson continued: “I’ll do whatever it takes to try and keep my country together because I believe in it head, heart, body and soul.

“I don’t think there’s going to be a campaign in the next few years. In fact, it might be some time longer than that.

She added: “Whether I’m nine or 90, if I believe and continue to believe in Scotland’s place in the United Kingdom, and I do, I will continue to fight for it.

“And it doesn’t matter whether I’ve got a job and a title or whether I’m just an activist the same as the millions of other Scots that spoke their mind, I will continue to do so.”