The SNP's Ian Blackford said Brexit had been a 'significant' long-term cause of the economic crisis. 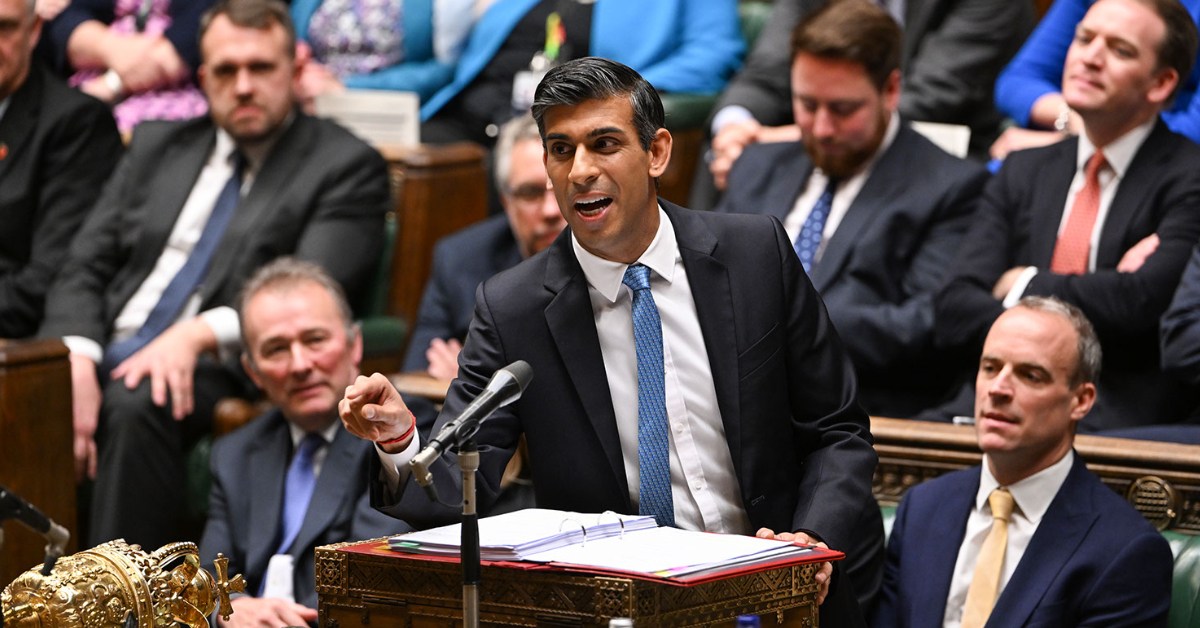 Rishi Sunak has insisted that Brexit was the “right thing” for the UK, despite the current economic crisis.

The Prime Minister claimed that the country’s exit from the European Union has allowed the UK to seize economic opportunities around the world.

He was responding to the SNP’s Westminster leader Ian Blackford during Prime Minister’s Questions who urged Sunak to admit that Brexit had been a “significant” long-term cause of the economic crisis.

“Let me wish everyone a happy St Andrew’s Day,” Blackford told the House of Commons on Wednesday.

“And those who know anything about St Andrew know that he is not just the patron of Scotland, he is celebrated right across Europe.

“That is why it is such a sad sight to watch this prime minister ram through a Bill that would rip up 4,000 pieces of European law – laws that protect workers’ rights, food standards and environmental protections.

“And it’s an even worse sight watching the leader of the Labour Party desperately trying to out-Brexit the Prime Minister.”

Blackford underlined the economic impact of the UK’s decision to leave the European Union.

He continued: “Brexit is now the elephant in the room that neither the Tories or Labour are willing to confront.

“When will the Prime Minister finally see reality and admit that Brexit is a significant long-term cause of the UK economic crisis?”

Sunak defended the decision to leave the EU, as he stated that the Government is opposed to freedom of movement.

“Straight forwardly, I was proud to support Brexit, it was the right thing for this country,” Sunak told MPs.

“It allows us to, first of all, get control of our borders which is incredibly important.”

He continued: “I noted what he said, and I agree with him actually, about the slight dexterity of the leader of the opposition on these topics of free movement.

“And I know he’ll join me in reminding the leader of the opposition about his previous promise to defend free movement of people – not something that we support.

“But we’re also seizing the economic opportunities, deregulating and signing trade deals around the world, that’s how we’ll drive growth and prosperity.”

Blackford pressed the Prime Minister over what route people in Scotland have to seek independence, in the wake of the Supreme Court decision last week.

He said: “Once again, what we’re seeing over Brexit is better together, we’re used to that in Scotland.

“The problem for both the Prime Minister and the Labour leader is that when it comes to Brexit even their own voters don’t agree with them.

“The last YouGov poll showed a record 56% now believe it was wrong to leave the European Union, and that figure is 71% in Scotland.

“One in five who actually voted for Brexit have now changed their minds. More and more people across these islands are wise to the fact that ‘make Brexit work’ is just another stupid slogan.

“But Scotland can’t be stuck with a new Brexit together coalition of the Tories and Labour.

“So, on this St Andrew’s Day, can the Prime Minister finally tell people in Scotland the democratic path to escape Westminster control, to deliver independence, so we can get back to the European Union?”

Sunak suggested that the fast rollout of the Covid-19 vaccine during the pandemic was due to the UK’s exit from the EU.

The Prime Minister told MPs: “He talks about democracy and votes, I think difference between him and I is that I respect the result of referendums.

“Just remember one thing – we had the fastest vaccine rollout in the world, we had that because of our freedoms after leaving the European Union.”