The SNP leader told her party's conference 'we believe in the rule of law'. 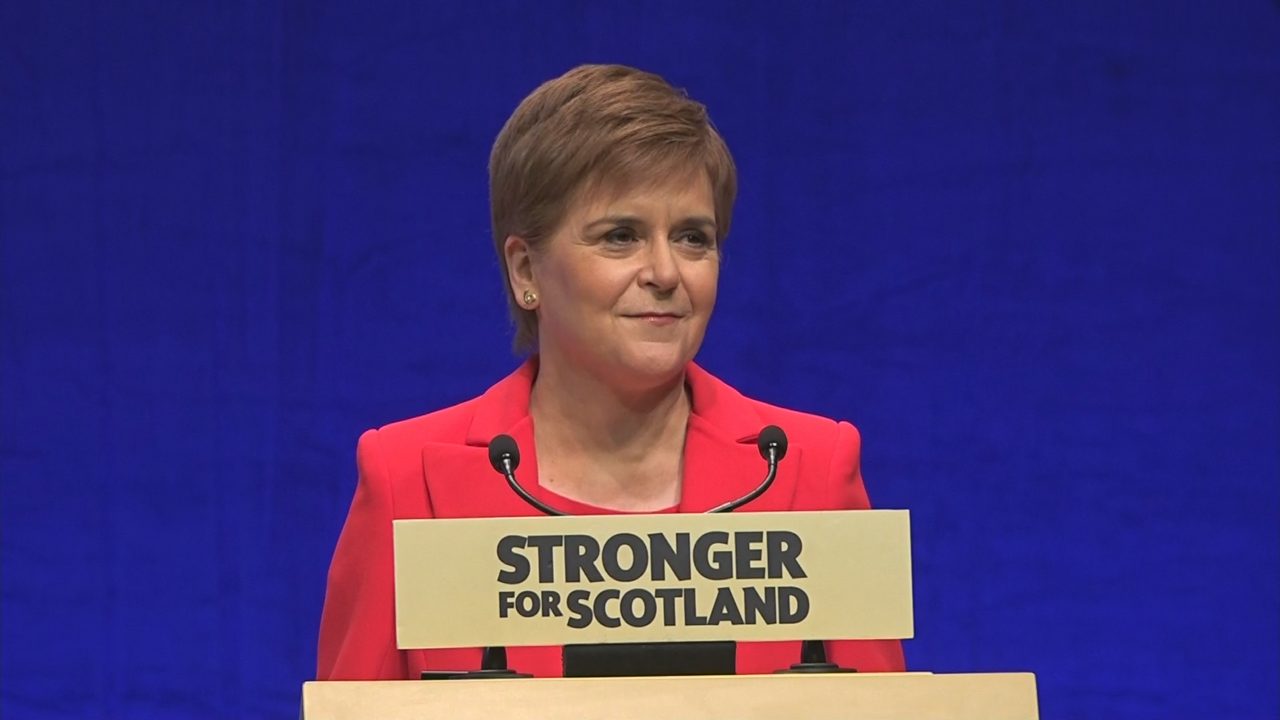 Nicola Sturgeon has said the SNP will respect the judgment of the Supreme Court if it determines that Holyrood does not have the power to legislate for a second independence referendum.

The SNP leader said that her party, as well as the independence movement, will “reflect” in such a scenario.

However, she insisted that the case for independence will in that case be put to the people of Scotland in an election.

The UK Government has stated its view that the Scottish Parliament does not have the legal competence to hold an independence referendum.

Speaking at the SNP conference in Aberdeen, Sturgeon stated that “we believe in the rule of law”, with the court due to consider the case in London this week.

Her remarks come just a day after SNP president Mike Russell claimed that the court would “fail” the people of Scotland if it does not rule in favour of allowing MSPs to legislate on a vote.

Sturgeon also addressed those who are not in favour of independence, telling them “Scotland belongs to you as much as it does to us”.

Addressing the case to be decided at the UK’s highest court, Sturgeon insisted that she would not give up on Scottish democracy.

“Over the next two days, the Supreme Court will consider whether the current law allows the Scottish Parliament to legislate for an advisory referendum,” she told delegates.

“If Westminster had any respect at all for Scottish democracy, this court hearing wouldn’t be necessary, but Westminster has no such respect.

“That means this issue was always destined to end up in court, sooner or later. Better, in my view, that it is sooner.

“If the court decides in the way we hope it does, on October 19 next year, there will be an independence referendum.

“And if the court doesn’t decide that way? First, and obviously, we will respect that judgment. We believe in the rule of law.

“And as a party, and a movement, we will of course, reflect.

“But fundamentally, it will leave us with a very simple choice. Put our case for independence to the people in an election or give up on Scottish democracy.”

The First Minister underlined the need for independence supporters to continue to make the case.

She said: “For now, the question of process, the ‘how’ of securing independence, is in the hands of judges.

“It is for us to crack on with answering the question ‘why’.”

Sturgeon told delegates that it is their job to “persuade, reassure and inspire” those who do not yet support Scotland becoming an independent country.

“I know that some watching at home will never be persuaded to vote Yes,” she said.

“You oppose independence as strongly, and from as much principle, as we support it. I respect that. That is democracy.

“And for those who want to be convinced but still have questions and doubts, it is our job to persuade, reassure and inspire.”

The SNP leader added: “Independence is not a miracle economic cure. But let this message ring out today – we can do better than this.”

A UK Government spokesperson stated that its clear view is that Holyrood does not have the legal competence to hold an independence referendum.

“People across Scotland want both their governments to be working together, focusing on the issues that matter to them, not talking about another independence referendum,” they said.

“We will set out our arguments in full at the Supreme Court hearing.”

Scottish Conservative leader Douglas Ross said that the First Minister had “taken her eye off the ball again”, with the SNP focusing on independence.

“Ordinary Scots watching Nicola Sturgeon’s narrow, independence-obsessed speech will have been dismayed at her skewed priorities,” he said.

“This was red meat for the SNP faithful but it didn’t even have the pretence of being the speech of a First Minister of Scotland.

“It beggars belief that in the midst of a global cost-of-living crisis, which ought to be her top priority, that Nicola Sturgeon devoted so much of her speech to the push for another divisive referendum that most Scots don’t want.

“She has taken her eye off the ball again and proved that the SNP will never put the people’s priorities first.

“Their own, self-serving, constitutional obsession always takes priority over everything.”

Scottish Labour’s deputy leader Jackie Baillie insisted that her party is focused on the priorities of people in Scotland as she criticised the record of the SNP.

“No amount of spin can hide the SNP’s disastrous governance of this country or its dangerous stewardship of the NHS,” she said.

“Unlike the SNP, Labour is focused on the priorities of the people of Scotland – tackling the cost-of-living crisis and building a fairer, greener and more secure future for our country.

“Scotland can lead the way on delivering the change that the UK needs by delivering Scottish Labour MPs across the country and booting the Tories out of Downing Street.”