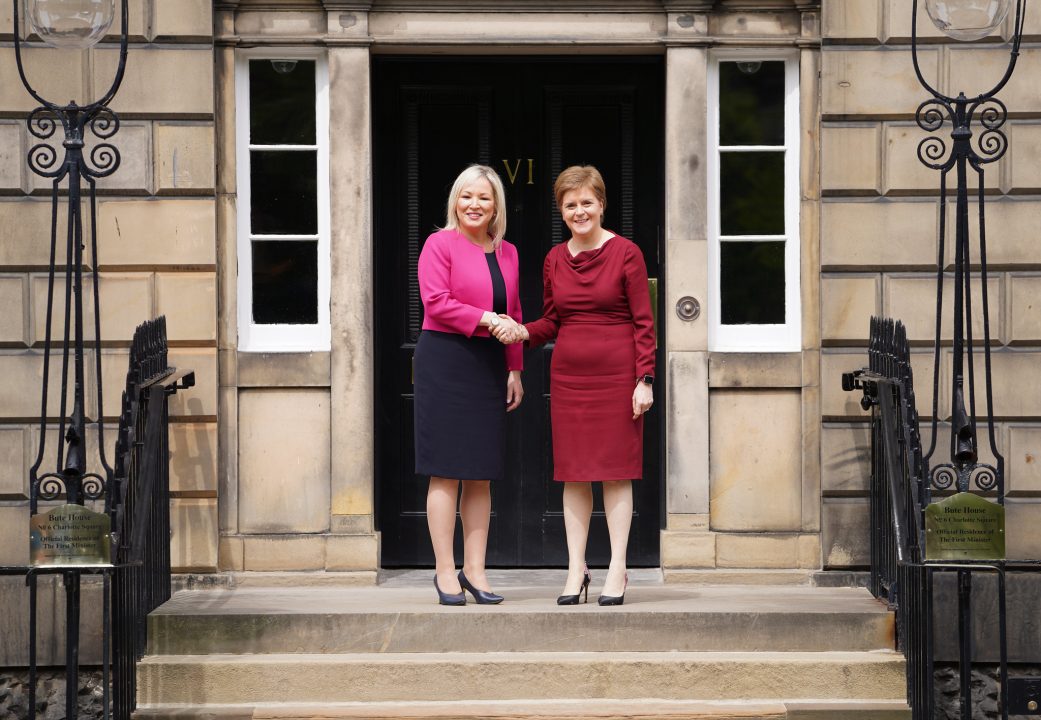 It comes after Sinn Fein won 27 seats in the Northern Ireland Assembly, becoming the largest party for the first time.

In doing so, the party pushed the Democratic Unionist Party (DUP), who won 25 seats, into second place.

It is believed that they discussed the cost of living crisis, the formation of a government at Stormont, and relations between Scotland and Northern Ireland.

In a Tweet, O’Neill said the two countries enjoy a “long and enduring” affinity.

“The historic bonds between Scotland & the island of Ireland go back centuries.

“We enjoy a long & enduring affinity as neighbours & friends. Moving forward we will strengthen the bonds that tie us.”

Following their meeting, Sturgeon thanked O’Neill for seeking to arrange the meeting.

And she said that she has written to the leaders of the DUP and Alliance parties in Northern Ireland to meet.

“Today’s meeting was an excellent opportunity to discuss some of the shared challenges Scotland and Northern Ireland face and I thank Michelle for reaching out and enabling us to discuss these extremely important issues in person,” she said.

“It was a particularly timely conversation which provided an update on the ongoing developments around establishing the Northern Ireland Assembly and Executive following elections earlier this month.

“We also discussed the Northern Ireland protocol – most notably the extremely concerning announcement by the UK Government that they intend to legislate to enable unilateral action to dis-apply parts of the protocol – and the incredibly damaging effects this would have in communities right across the UK.

“In a cost of living crisis and teetering on the edge of recession, pitching us into a trade dispute with the EU could be what tips us over.”

The SNP leader also addressed the cost-of-living crisis, and the need for greater action to be taken by the UK Government.

She continued: “Intergovernmental relations are essential when it comes to tackling shared challenges and it is clear that much more needs to be done by the UK Government to ensure a rapid and effective response to the devastating cost of living crisis facing households across these islands.

“No one should ever have to make a choice between heating and eating.

The First Minister added: “Today’s meeting was a further example of the close relationship between Scotland and Northern Ireland.

“In that spirit, I have written today to the leaders of the DUP and Alliance parties with an offer to meet to discuss these important matters.”

“People across Scotland – including those who support independence – will be concerned about Nicola Sturgeon’s eager embrace of Michelle O’Neill and Sinn Fein,” he said.

“For many, the party’s associations will be far from the ‘civic nationalism’ that Nicola Sturgeon claims to champion, but it seems that the SNP will work with anyone so long as they support the break-up of the UK.

“It’s important to remember that in every intervention the SNP makes, it does so with the intention of only one selfish and damaging goal.”