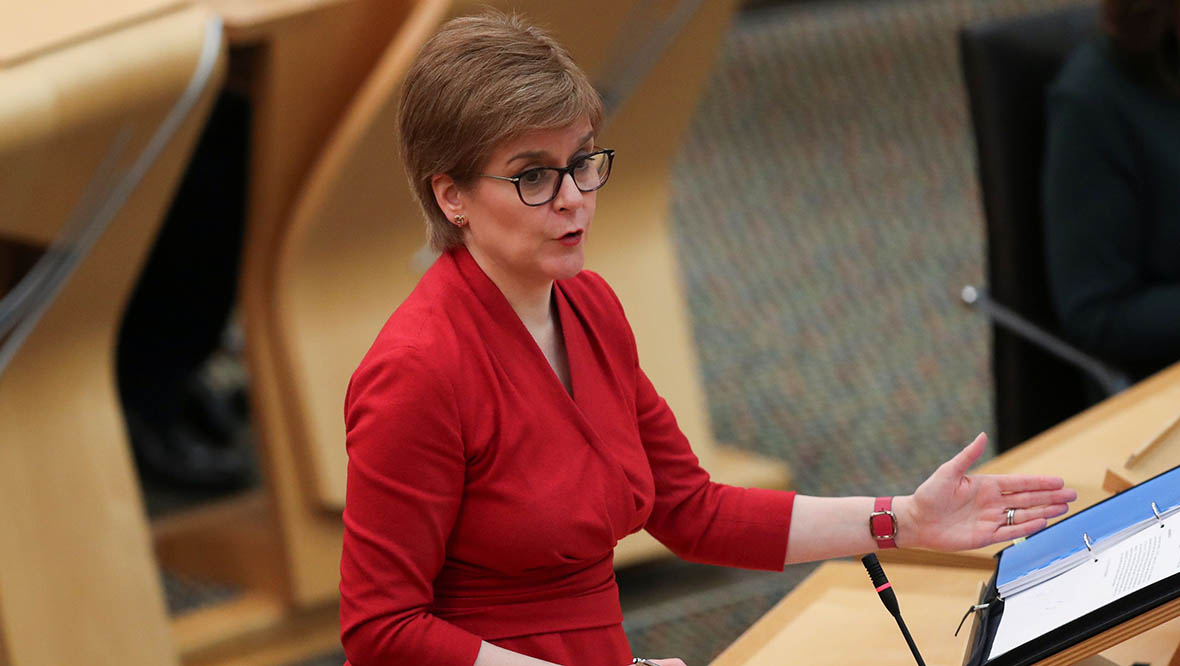 First Minister Nicola Sturgeon has been cleared of breaching the ministerial ethics code.

Sturgeon had been accused of misleading parliament and failing to record meetings connected to harassment allegations levelled at her predecessor Alex Salmond.

An inquiry carried out by the independent code adviser James Hamilton QC ruled on Monday that there had been no breach of the code.

His 61-page report concluded: “I am of the opinion that the First Minister did not breach the provisions of the ministerial code in respect of any of these matters.”

Had the First Minister been found to have knowingly broken the rules, she would have been expected to offer her resignation less than two months before the Scottish election.

Sturgeon said: “I welcome the conclusions of James Hamilton’s independent investigation, which are comprehensive, evidence-based and unequivocal.

“Mr Hamilton has considered all of the allegations against me, and I am happy that his report’s findings clear me of any breach of the ministerial code.

“I sought at every stage in this issue to act with integrity and in the public interest.  As I have previously made clear, I did not consider that I had broken the code, but these findings are official, definitive and independent adjudication of that.”

The Scottish Conservatives repeatedly called for Sturgeon to resign in the run-up to the report being published and have tabled a motion of no-confidence in the First Minister.

However, the Scottish Greens said they would back Sturgeon, meaning she is likely to survive the Holyrood vote on Tuesday.

Mr Hamilton, the former director of public prosecutions in the Republic of Ireland, is the independent advisor to the Scottish Government on the ministerial code – a set of rules guiding how ministers should conduct themselves.

The code says it is the First Minister who is “the ultimate judge of the standards of behaviour expected of a minister” and responsible for the appropriate consequences for breaches.

The current First Minister referred herself to Mr Hamilton following Salmond’s successful legal challenge of the Scottish Government’s unlawful investigation into harassment complaints against him, which led to Salmond winning more than £500,000 in court.

A separate inquiry by MSPs into the government’s handling of the harassment complaints is expected to publish its findings on Tuesday morning.

What did the report find?

Mr Hamilton concluded in his report that Sturgeon did not breach the ministerial code in respect of any of the four issues he considered.

These included an allegation that her “failure to record her meetings with and telephone discussions with Salmond and others” in March, April, June and July 2018 was a breach and that the First Minister “may have attempted to influence the conduct of the investigation” into harassment complaints made against Salmond.

The third issue centred on whether Sturgeon misled the Scottish Parliament in relation to the meetings in 2018, and the fourth alleged that Sturgeon was in breach of her duty to comply with the law in relation to Salmond’s successful legal challenge against the Scottish Government.

Mr Hamilton’s inquiry also looked into Sturgeon’s failure to refer to the meeting of March 29, 2018 in a later statement to the Scottish Parliament.

Discussing this, Mr Hamilton’s report says: “It is regrettable that the First Minister’s statement on January 8, 2019, did not include a reference to the meeting with Mr Aberdein on March 29.

“In my opinion, however her explanation for why she did not recall this meeting when giving her account to parliament, while inevitably likely to be greeted with suspicion, even scepticism by some, is not impossible.

“What tilts the balance towards accepting the First Minister’s account for me is that I find it difficult to think of any convincing reason why if she had in fact recalled the meeting she would have deliberately concealed it while disclosing all the conversations she had had with Mr Salmond.”

Scottish Conservative leader Douglas Ross: “The First Minister has been given a pass because it has been judged her ‘failure of recollection’ was ‘not deliberate’.

“I respect Mr Hamilton and his judgement but we cannot agree with that assessment. Nicola Sturgeon did not suddenly turn forgetful.

“She is not free and clear. The First Minister promised to ‘respect the decisions’ of both inquiry reports, not to pick and choose which one suits her and try to discredit the other.

“The SNP spin machine will go into hyper-drive to again attack the committee report because they’re running scared of its findings. They have accelerated the vote of no confidence in Nicola Sturgeon to avoid MSPs scrutinising that report.

“As James Hamilton says, it is up to the Scottish Parliament to decide if the First Minister has been misleading.

“This report does not change the overwhelming evidence that Nicola Sturgeon misled parliament, her government badly let women down and wasted more than £500,000 of taxpayers’ money.

“If Nicola Sturgeon won’t accept responsibility, then I urge opposition parties to back our vote of no confidence.

“Nationalist or unionist, left or right, none of the usual political divisions matter now. Either we respect the fundamental principles of democratic accountability – or we don’t.”

Scottish Labour leader Anas Sarwar: “Unlike others, we have been clear from the outset that we would not prejudge the outcome of this inquiry.

“We acknowledge the findings of the report and we await the publication of the committee inquiry and whether its members conclude the First Minister misled parliament.

“What is clear is that this entire process has deeply damaged public trust in our politics at a time of national crisis, and there are absolutely no winners today.

“At the heart of this are two women who have been badly let down by the government, and it remains the case that nobody has taken responsibility.

“There are still questions of judgement and an urgent need to restore trust, confidence and transparency in our institutions.”

Scottish Greens co-leader Patrick Harvie: “Unlike other political parties we’ve said all along that we would respect due process, we therefore welcome the publication of James Hamilton’s independent report. It retains credibility in this process, unlike the parliamentary committee which has repeatedly sabotaged its own authority and betrayed the trust of original complainers.

“Mr Hamilton has clearly concluded that the First Minister did not breach the ministerial code, so we will not support the vote of no confidence being pushed by the Tories.

“In lodging a vote of no confidence before this report was published, just as they called for the First Minister’s resignation before she even gave evidence to the parliamentary committee, the Tories have shown that they have no interest in establishing the truth.

“This entire saga should have been about examining a process that let down women and ensuring that was never repeated. In their ridiculous attempts to pursue a political scalp the Tories have completely ignored that fact.”

Scottish Liberal Democrats leader Willie Rennie: “The judgement from James Hamilton does not make the First Minister’s resignation automatic but no-one can deny that her errors of judgement still make resignation a live consideration.

“James Hamilton does not give the First Minister a clean bill of health. He says it is up to parliament to determine whether it has been misled over the help that the First Minister is said to have offered Alex Salmond in her home.

“Even the most ardent SNP supporter must recognise that the women involved were let down by the government and that £500,000 was wasted defending the indefensible in court.

“These matters will be addressed by the committee report tomorrow which will need to be considered carefully.

“Let me be clear. No-one will win from this ugly episode, certainly not Alex Salmond.”