Scotland's First Minister met with the US Speaker at the Capitol Building in Washington. 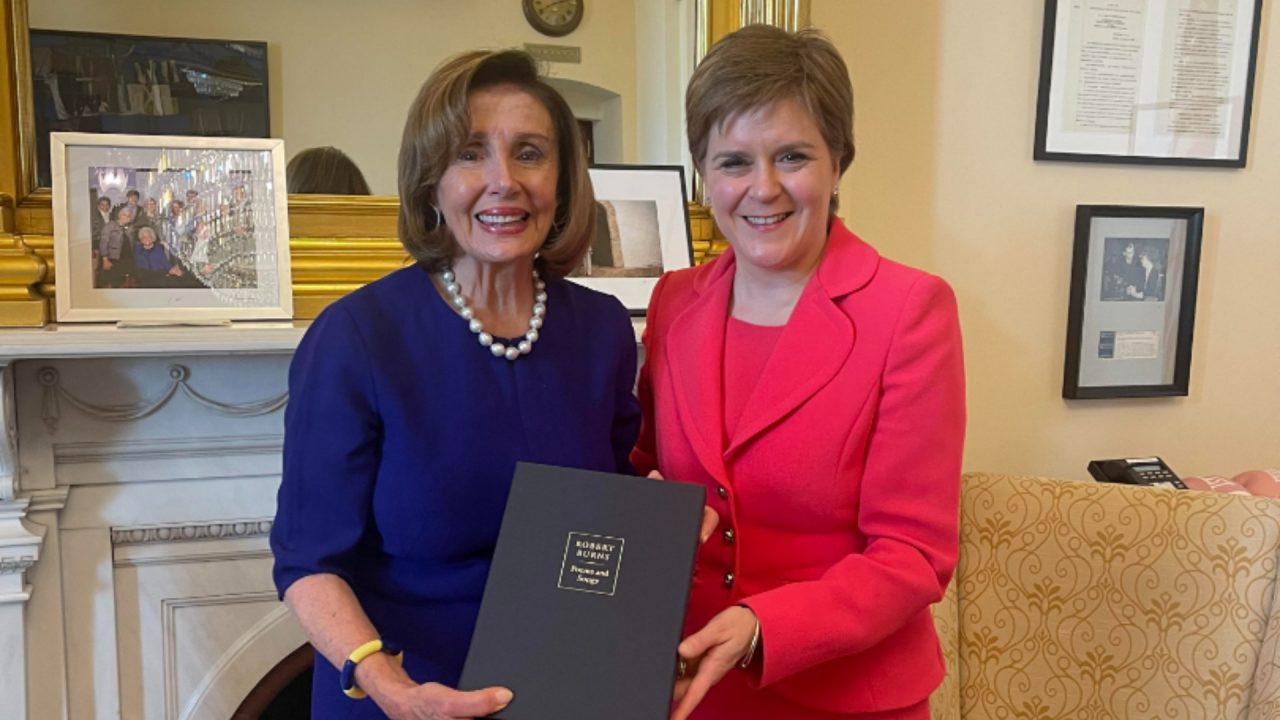 US Speaker Nancy Pelosi has praised the leadership of Nicola Sturgeon, calling her a “model to women everywhere”.

Scotland’s First Minister met with Pelosi during a visit to Washington, where they built on climate talks held during the COP26 summit in Glasgow last year.

In a joint-appearance at the Capitol Building, Sturgeon said she had the “utmost respect and admiration” for the Speaker.

Pelosi said that it was a “pleasure and honour” to welcome the First Minister to the Capitol.

“Last time we met was in Glasgow – thank you for the hospitality and organisation of Scotland in forming COP26, it was an honour to be there with you,” she said.

“Thank you for your leadership in terms of protecting the planet in reducing all of our dependence on Russian oil.

“Thank you also for welcoming Ukrainian refugees to Scotland.”

Pelosi acclaimed Sturgeon for her role as a woman in a position of leadership.

“When we were in Scotland, I had the honour of also participating in a presentation, a big crowd of people coming, for gender and climate,” the Speaker said.

“The First Minister has in her own leadership role been a model to women everywhere in terms of women in leadership, and again with great excellence.

“And again, that day, people from all over the world were able to see that manifestation of leadership.”

Scotland’s First Minister said that it was “encouraging” to see the US achieving progress on climate following discussions at COP26.

“It is a real pleasure and privilege for me to be here in the Capitol, having the opportunity to renew my acquaintance with the Speaker, someone for whom I have the utmost respect and admiration,” she said.

“I enjoyed very much our meeting and discussions in my home city of Glasgow during COP26 where it was very encouraging to see the United States show such constructive leadership in achieving the progress we made at COP26.

“I’m very much looking forward to continuing these discussions with the Speaker today.”

The First Minister also acknowledged the crisis in Ukraine, as she condemned the actions of Vladimir Putin.

She said: “Obviously we live in a world that has changed dramatically since we gathered in Glasgow in November last year.

“Not least the brutal, illegal and completely unprovoked invasion by Putin of Ukraine.

“That is having many implications first and foremost for Ukraine, but for the world indeed, and it is a reminder of the importance of the democratic world coming together and standing together in defence of these values of freedom and democracy.”

“So it is a privilege for me to be here to renew and to strengthen that relationship as we stand together as nations in defence of those values we hold dear.”

Scottish Conservative spokesman for the constitution, external affairs and culture, Donald Cameron, criticised Sturgeon over her trip to the US, accusing her of “grandstanding”.

“The Scottish public want the First Minister to focus on the issues that matter to them – restoring our NHS, fixing our education system and pandemic recovery,” said Cameron.

“But Nicola Sturgeon would rather jet off to the US to push her independence obsession in the White House.

“Scottish taxpayers are sick and tired of watching their hard-earned cash being spent on PR, photo-ops and promoting an independence referendum that poll after poll has shown that the majority don’t want.”

He added: “As foreign policy and the constitution are reserved matters anyway, the trip is little more than grandstanding by the First Minister.

“Instead of trying to convert US officials to the selfish cause of the SNP, Nicola Sturgeon should be focused on tackling her government’s woeful performance here in Scotland.”