Liz Truss will officially become Prime Minister after meeting the Queen at Balmoral on Tuesday. 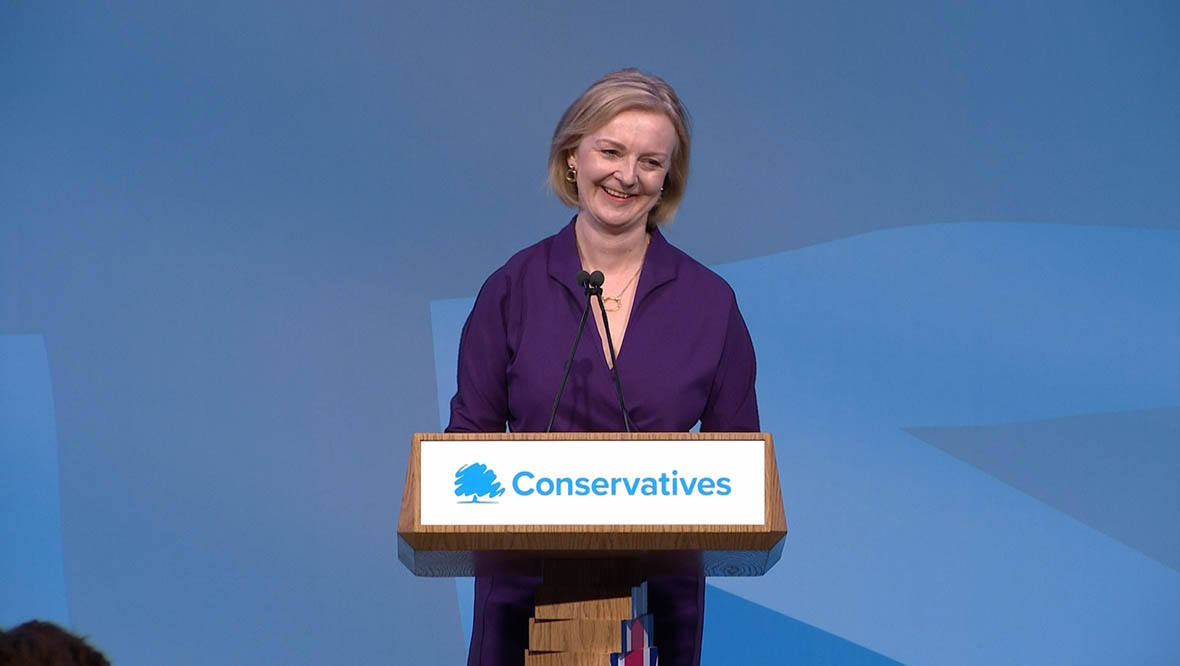 Incoming Prime Minister Liz Truss has promised a “bold plan” to cut taxes and grow the economy after winning the Tory leadership contest.

Sir Graham Brady, chairman of the 1922 Committee of Conservative backbench MPs, announced on Monday that Truss had defeated rival Rishi Sunak by 81,326 votes to 60,399.

It means Truss will become the country’s third female prime minister and the UK’s fourth PM in a little over six years – the fastest turnover in new occupants of 10 Downing Street for nearly a century.

Truss faces the immediate challenge of easing the cost-of-living crisis for households across the country who are dealing with rampant inflation and soaring energy bills.

Speaking immediately after the result was announced, she promised a “bold plan” to cut taxes and grow the economy.

The foreign secretary also used her victory speech to indicate she would not be triggering an early general election, instead pledging to secure “a great victory for the Conservative Party in 2024”.

She won by a significant margin, but the 57% victory over Mr Sunak’s 43% was slimmer than in other recent contests.

Truss thanked her “friend” Boris Johnson, who will depart No 10 on Tuesday before they both travel to Balmoral to meet the Queen for the formal handover of power.

“Boris, you got Brexit done, you crushed Jeremy Corbyn, you rolled out the vaccine and you stood up to Vladimir Putin. You were admired from Kyiv to Carlisle,” she told the QEII conference centre in Westminster.

Truss will quickly begin work putting together a response to the energy crisis, with support promised within days.

“We need to show that we will deliver over the next two years,” she said.

First Minister Nicola Sturgeon said she “will seek to build a good working relationship” with Truss, while calling on her to freeze energy bills and deliver more funding for public services.

He said: “Both Liz and Rishi, along with their teams, should be proud of the campaigns they have run and the way they have engaged party members.

“However, now that the leadership election is over, it is time for the whole of the Conservative Party to come together to tackle the big challenges our country faces.

“Throughout her political career, Liz Truss has shown herself to have a record of delivery, whether that was in removing the US tariffs on whisky and cashmere or in managing the UK’s robust support for Ukraine both before and following the Russian invasion.

“I look forward to working with our new leader and Prime Minister as she continues to deliver for Scotland and the whole of the UK at this most challenging of times.”

European Union leaders said they were looking forward to a “constructive relationship” with Truss, who backed Remain in 2016, but later said she had changed her mind and supported Brexit.

European Commission president Ursula von der Leyen offered her congratulations and added she wanted a “constructive relationship” with Ms Truss “in full respect of our agreements”.

Truss has said she intends to press ahead with the Northern Ireland Protocol Bill, which will allow the Government to override parts of the agreement struck with the European Union on post-Brexit arrangements.

“The EU and the UK are partners,” European Commission president Ursula von der Leyen tweeted. “We face many challenges together, from climate change to Russia’s invasion of Ukraine.

“I look forward to a constructive relationship, in full respect of our agreements.”

European Commission vice-president Maros Sefcovic, who has been leading the Brussels side in talks on implementing the Brexit arrangements, said a “positive relationship” between the UK and EU “is of great strategic importance”.

“I stand ready to work intensively and constructively with my new UK interlocutor to foster such a partnership, in full respect of our agreements,” Mr Sefcovic tweeted.

People in Truss’s South West Norfolk constituency gave a mixed reaction. Retired probation officer Jackie Westrop, of Downham Market, said Truss has “a hell of a lot of work to do” in her new role.

“I extend my congratulations,” said the 66-year-old, speaking outside a supermarket in the town.

“This is something that she’s driven for for quite some time. I only hope her constituency doesn’t suffer.

“This constituency, like a lot of other places in the country, has some significant problems, and I hope she and her team don’t forget the people who originally elected her as an MP years ago.”

Truss entered Parliament in 2010 with a comfortable majority of more than 13,000.