Keir Starmer: Indyref2 a matter for people in Scotland

The Labour leadership contender said he wanted a new constitutional set-up 'based on federalism'. 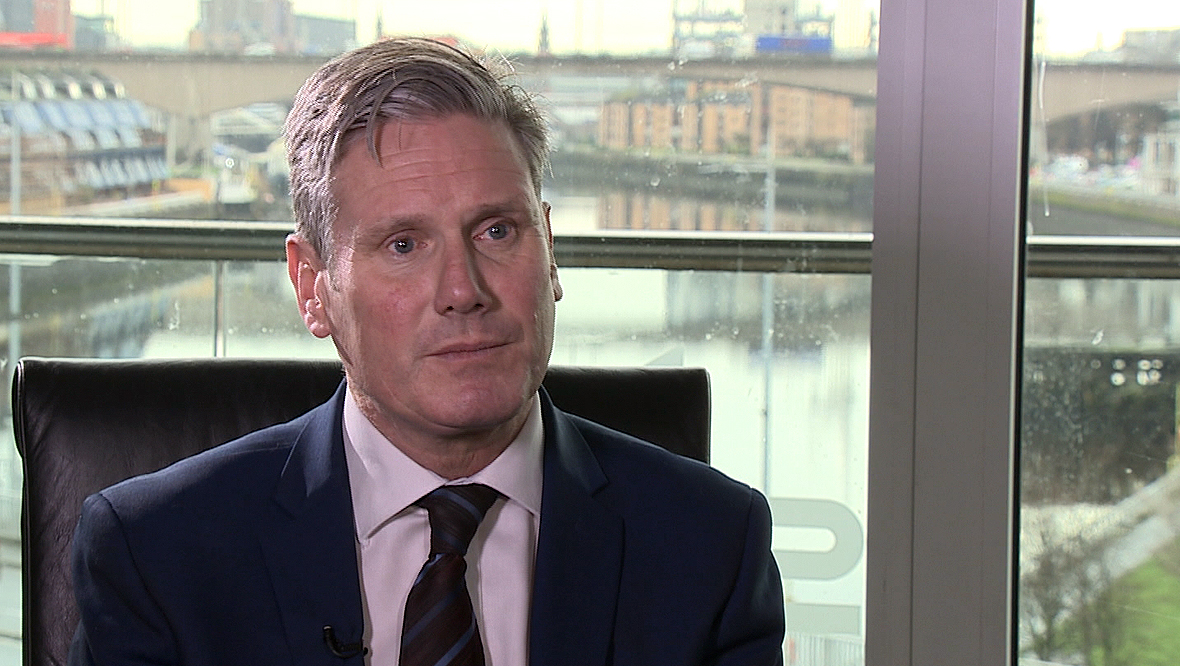 Having a second independence referendum is “a matter for people in Scotland”, Labour leadership contender Keir Starmer has said.

Speaking to STV’s Scotland Tonight, he said he supported Scotland staying in in the UK but in a new constitutional settlement “based on federalism”.

Starmer said he wanted to make a case that was neither “about a second referendum nor about the status quo” but added he did not believe it would be “right to block anything” that the Scottish Parliament agreed.

Holyrood is expected to back the principle of holding a new independence vote this year on Wednesday, having previously endorsed a referendum in March 2017.

There is currently a majority of pro-independence MSPs in Holyrood, counting the SNP and the Scottish Greens, with Nicola Sturgeon’s party committing in 2016 to indyref2 if Brexit happened against the votes of Scots.

Starmer, considered one of the frontrunners in the race to succeed Jeremy Corbyn, said the issue of an independence vote should be reflected on if “the Scottish Parliament gets its mandate”.

But he stressed the question of Westminster facilitating such a vote is one “for Boris Johnson and his government”.

Earlier this month, the Prime Minister refused a formal request from the First Minister for the transfer of powers to Holyrood to told a re-run of the 2014 referendum.

Starmer criticised Johnson’s Brexit deal and its placing of Northern Ireland in regulatory alignment with the European single market and, therefore, the Republic of Ireland.

He said the policy could boost nationalism in both Scotland and Northern Ireland and “runs the real risk that the whole of the United Kingdom unravels”.

Starmer also addressed anger within Scottish Labour after the Labour leadership last year altered the party’s stance to be more open to a second independence referendum.

He insisted the party’s policy on Scotland’s constitutional question should be decided by agreement, “not imposed on Scottish Labour by London”.

On the matter of an independence referendum, the Labour leadership contender said: “I absolutely accept this is a question for Scotland and the people of Scotland, of course I accept that.

“But I think I want to make the argument that is not an argument about a second referendum nor about the status quo, but is actually an argument about a way in which we can have Scotland remaining part of the United Kingdom but recognising the need to (have) more power and influence and a different settlement in Scotland.”

However, he stressed that he did not think polls were producing a “consistent pattern” showing support for independence and a new referendum.

Pressed by STV’s political editor Colin Mackay on if he thought Westminster should block Holyrood’s call for a vote, Starmer insisted: “Of course if there’s a majority it has to be looked at in Westminster.

“I don’t think it’s right to block anything that comes from a parliament here, of course I don’t.

“But I think what you’re trying to do is to get me to simply answer one question without broadening it out.

“Frankly, that’s where we’ve got stuck for many, many years, just seeing this a black and white, yes-no question.”

He said the example of Brexit showed the risks of “the rupturing of political and economic union” and that breaking away from the UK “would not be in Scotland’s best interest”.

Starmer accepted Scotland’s constitutional status is an issue that has “bedevilled politics for a very, very long time” and said there is a “yearning” in parts of England, particularly those that voted for Brexit, for “more power and control over what happens in their regions”.

He said more powers could be devolved to Holyrood in areas like employment, social security and immigration but stressed the need to instead change the system to a new “lasting settlement… based on federalism”.

Tune into Scotland Tonight for Colin Mackay’s full interview with Keir Starmer at 10.40pm on Tuesday.