The Prime Minister visited an offshore wind farm on the final day of his trip to Scotland. 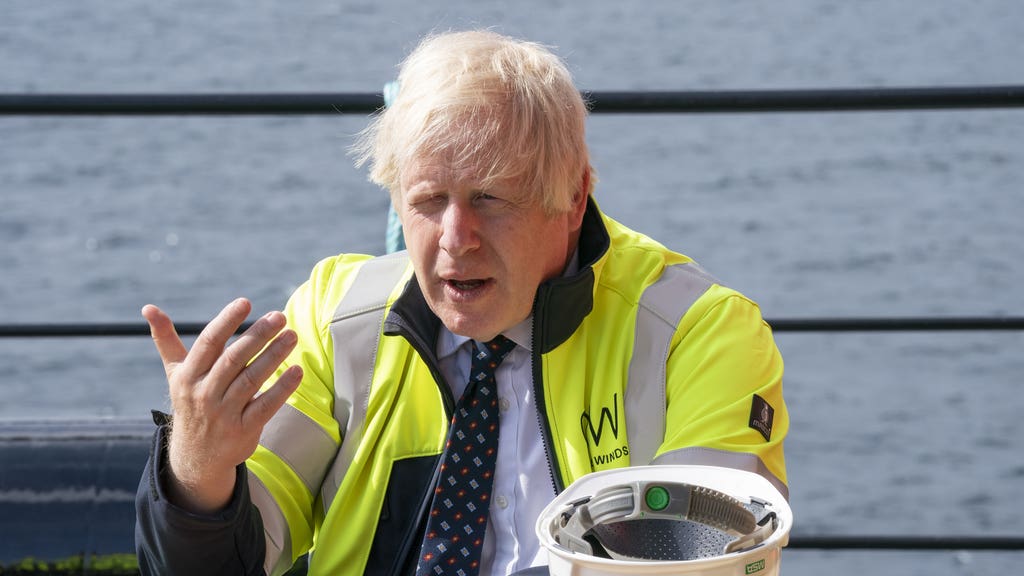 Boris Johnson has promised a “smooth and sensible” shift from fossil fuels to renewable power, adding that Margaret Thatcher’s closure of coal mines had given the UK an “early start”.

The Prime Minister, who was visiting an offshore wind farm on the final day of his trip to Scotland, said there were “massive opportunities” to increase the use of green technology.

The visit comes ahead of the COP26 international climate summit in Glasgow in November, with Johnson insisting he wanted it to be “ambitious” in its aims.

Johnson acknowledged that North Sea oil had been a “huge part of the UK economy for decades now” and contracts already signed for work in the industry “should not just be ripped up”.

He told reporters: “We recognise that and there has got to be a smooth and sensible transition.

“But that doesn’t mean there aren’t massive opportunities to increase the use of green technology.”

Pressed on whether he would set a deadline for ending fossil fuel extraction, Johnson said: “Look at what we’ve done already. We’ve transitioned away from coal in my lifetime.

“Thanks to Margaret Thatcher, who closed so many coal mines across the country, we had a big early start and we’re now moving rapidly away from coal altogether.”

Thatcher’s time in office included the bitter miners’ strike of 1984-85.

Johnson acknowledged that tackling climate change, limiting temperature rises to below 1.5 degrees under the terms of the Paris climate deal, was “going to be a tough ambition, this is a difficult thing to achieve”.

But he urged other world leaders to rise to that challenge, saying: “What we won’t do, we will not reduce the level of our ambition for COP, in order to set the target, an ambition that we know we can meet.

“I’m going to be as ambitious as possible for COP26 in Glasgow. I want the world to recognise the extent of the challenge, and I want everybody to try to rise to meet it in the way that I just set out with those ambitions.

“We must, must, must be as ambitious and as tough as possible and that’s what we’re going to do.”

Johnson faced criticism from Labour leader Sir Keir Starmer and a union boss as he visited the offshore wind development.

The Prime Minister and business minister Kwasi Kwarteng boarded the Esvagt Alba in Fraserburgh Harbour, Aberdeenshire, on Thursday morning before heading several miles out into the Moray Firth to the Moray East Offshore Wind Farm.

The 100-turbine development is under construction but began exporting its first power to the National Grid in June.

The development sparked controversy when BiFab fabrication yards in Scotland were overlooked for manufacturing contracts, with jobs going overseas.

GMB general secretary Gary Smith said: “Moray East is a monument to the broken promises of the political leaders who promised us a ‘Saudi Arabia of renewables’ and it should serve as an important lesson to this Prime Minister.

“If he wants a genuine green jobs revolution across the nations and regions of the UK, then he must stop the mass export of the jobs we need to deliver it.”

Sir Keir, also on the second day of a two-day visit to Scotland, called for action not “soundbites” from the Prime Minister on climate change.

He said: “We’ve got a UK Prime Minister who bundles around with a cabaret of soundbites, with targets about climate change but doesn’t put in place the action.

“Get your head out of the sand, stop the soundbites, let’s have some action.”

Speaking on a visit to the UK’s largest on-shore wind farm, Whitelee just outside Glasgow, Sir Keir also criticised the Scottish Government, claiming it had delivered just one in 20 of the jobs expected from offshore renewables.

He urged both governments “to take their heads out of the sand and make the necessary investment and commitment in next generation energy”.

He was also told the Brexit deal for the industry “had fallen far short of expectations”.