John Swinney said the decisions 'have not been easy' as the Scottish Government seeks to make savings. 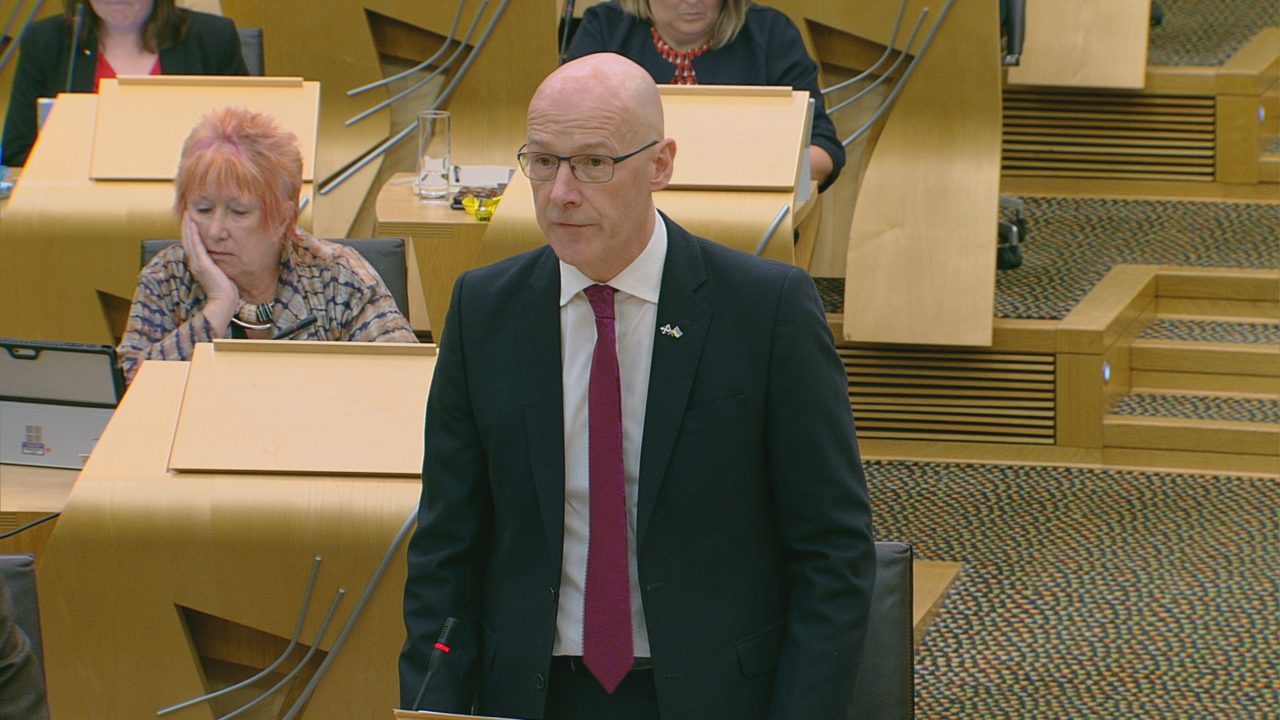 The Scottish Government has announced a £500m reduction in planned spending, as John Swinney warned that “difficult choices” have to be made.

Speaking at Holyrood on Wednesday, the deputy first minister told MSPs that the Scottish Budget is at the “absolute limits of affordability”.

Swinney explained that the Government, in needing to make savings, had sought to make the cuts on what it considers as having the least impact on public services and individuals.

Swinney said the decisions “have not been easy” and that they “will not be without consequence”.

However, he explained when taken together, the cuts would add up to a “significant” reduction in expenditure.

“In all my experience, now and during my previous tenure as finance secretary, there has never been a time of greater pressure on public finances,” he said in a speech at the Scottish Parliament.

“Our budget was based on a UK Spending Review that simply did not foresee the levels of inflation that are now a reality.

“Last summer, inflation was just 2%. In December, when the budget was agreed, CPI stood at just 5.4%. Now it is more than 10% and predicted to go higher still.

“The result is simple – almost every cost government incurs has risen.

“At the same time, our budget is now worth around £1.7bn less than it was in December. That along would require the budget to be revisted.

“But, in times of crisis, the job of the finance secretary is not simply to balance the books, it is to find the money to help families, to back business and to fund the priority projects that improve lives for the long term.”

He added: “The Scottish Budget is at the absolute limits of affordability.”

Swinney explained that he has written to Holyrood’s Finance Committee setting out the reductions made to planned spending.

He said: “Difficult choices must be made. There is no unallocated cash. There is no reserve that has not been utilised. Every penny more on one policy is a penny less on another policy.

“I have therefore today written to the Finance Committee setting out around £500m in reductions in planned spending and forecasting that we have made in recent weeks.

“These include a reduction of £53m in the budget for employability schemes, utilising funding of £56m generated by the Scotwind clearing process – funding that will be reinstated in future years and used, as planned, to invest in the Just Transition.

“£33m deferral of ring-fenced agriculture funds, to be returned in future years, and whilst not impacting eligibility, taking a risk based forecasting approach based on demand of £37m in the budget for concessionary fares.”

The deputy first minister said that given the circumstances, the reductions in spending are “unavoidable”, as he admitted the cut to employability was not a decision the Government wanted to take.

“Throughout this process we have taken those savings that we consider have the least impact on public services and on individuals,” he said.

“Still, these decisions have not been easy and will not be without consequence.

“In particular, the reduction in employability funding. But given the circumstances we face, they are unavoidble.

The UK Government, Swinney claimed, had reserved the powers needed to tackle the crisis to themselves.

“In short, what I have set out today is just the beginning of the hard choices,” he told the Scottish Parliament.

“For eight weeks we have heard the new Prime Minister talk of unfunded tax cuts that will not help the lowest paid or those reliant on Universal Credit, and of cutting public sector spending to deliver tax cuts for businesses.

“If, in pursuing these policies, the UK Government reduces the budgets of any portfolios where we have devolved responsibility, then the challenge we face becomes harder, as our budget will become smaller.

“This is the harsh reality of a fixed budget and limited powers. The Scottish Government simply does not have access to many of the levers that would provide the greatest support in this crisis; taxation of windfall profits, regulation of the energy market, or borrowing.

“That is why the new Prime Minister and her new chancellor must take action immediately.

“They have reserved the powers over this crisis to themselves. So, my appeal to the United Kingdom Government is to cancel the energy price rises and fund the targeted support people desperately need.

“Help families struggling to feed their children and heat their homes this winter. Provide the additional funding necessary to meet the impact of higher public sector pay.”

Swinney concluded: “We will do everything we can, we will make the hard choices, but only the UK Government can act to end this crisis.

“They should do so and I encourage them to do so now.”