John Swinney rejects call for Humza Yousaf to be sacked 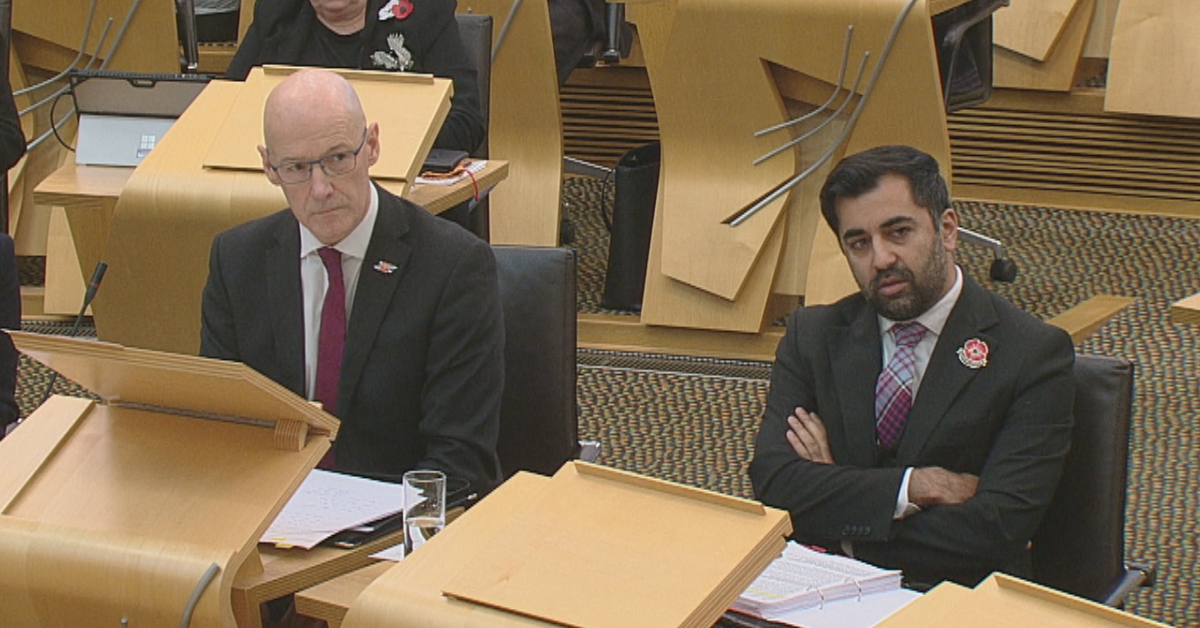 John Swinney described calls for Humza Yousaf to be sacked as health secretary a “laughable proposition”, in a fiery response to claims that Scotland’s NHS is in crisis.

The deputy first minister hit back at Scottish Conservative leader Douglas Ross over his assertion that the health service “deserves so much better” than Yousaf in an exchange at the Scottish Parliament.

Swinney took questions from MSPs as he deputised for Nicola Sturgeon at FMQs on Thursday, with the SNP leader in Blackpool to attend the British-Irish Council.

Ross pointed to nurses across the country voting for strike action, long waiting times and patients struggling to see their GP as evidence of the health service experiencing a crisis situation.

Putting the point to Swinney at Holyrood, Ross questioned “how much worse” it would need to get for patients and staff before Yousaf takes responsibility.

“From day one, we have said to John Swinney, the SNP and this government that Humza Yousaf’s recovery plan was hopeless, it was flimsy. No detail and no substance,” said Ross.

“The SNP insisted it would get Scotland’s NHS back on track, but this is what their recovery plan has delivered – record vacancies, the longest ever waiting times, patients struggling to see their GP, nurses voting to strike for the first time ever and the worst A&E waiting times statistics on record.

“Scotland’s NHS is in crisis and whoever the SNP try to blame, it’s obvious that the man responsible is sitting right there next to the deputy First Minister.

“Humza Yousaf has failed and all he can do is spin that the (NHS) is in recovery when really it’s at breaking point.

“Just how much worse does it have to get for patients and staff in Scotland before he takes responsibility?”

Ross added: “Scotland’s NHS deserves so much better than Humza Yousaf. When will this health secretary be sacked?”

Swinney dismissed the suggestion that Yousaf should be dismissed as health secretary, pointing to the turnover of the UK Cabinet under Johnson, Truss and Sunak.

He responded: “Given the absolutely, totally chaotic turmoil of ministerial resignations and dismissals in the United Kingdom Government, what a laughable proposition to put to me this morning.

“You know, I’ve been active in politics for many years, a member of Parliament for a quarter of a century, and you know when somebody’s run out of road when they start playing the man and not the issue, which is what Douglas Ross is doing just now.”

Swinney underlined the need for the UK Government to increase the budget for the Scottish Government.

He continued: “Let me just tell Douglas Ross the situation that we are facing and we’re experiencing – we have the best pay deal on offer in the United Kingdom to health and care staff.

“We have record A&E performance, the best record performance of any health system in the United Kingdom.

“We have record numbers of staff in the National Health Service. And I’ll tell him (Ross) what’s not helping.

“What’s not helping is the folly of Brexit because Brexit has reduced the amount of staff available because of the loss of free movement.

“And I’ll tell Douglas Ross what’s also not helping – it’s the fact that the United Kingdom Government is not recognising the public spending pressures that exist because of inflation that they have fuelled by their stupid economic decisions and as a consequence, public budgets are under enormous pressure.

“So, if Douglas Ross wants to make himself useful, he can ask the United Kingdom Government to increase the budget for the Scottish Government so we can support the health service to a greater extent and start addressing the issues that face members of the public.”