The First Minister made a statement at the Scottish Parliament on Tuesday. 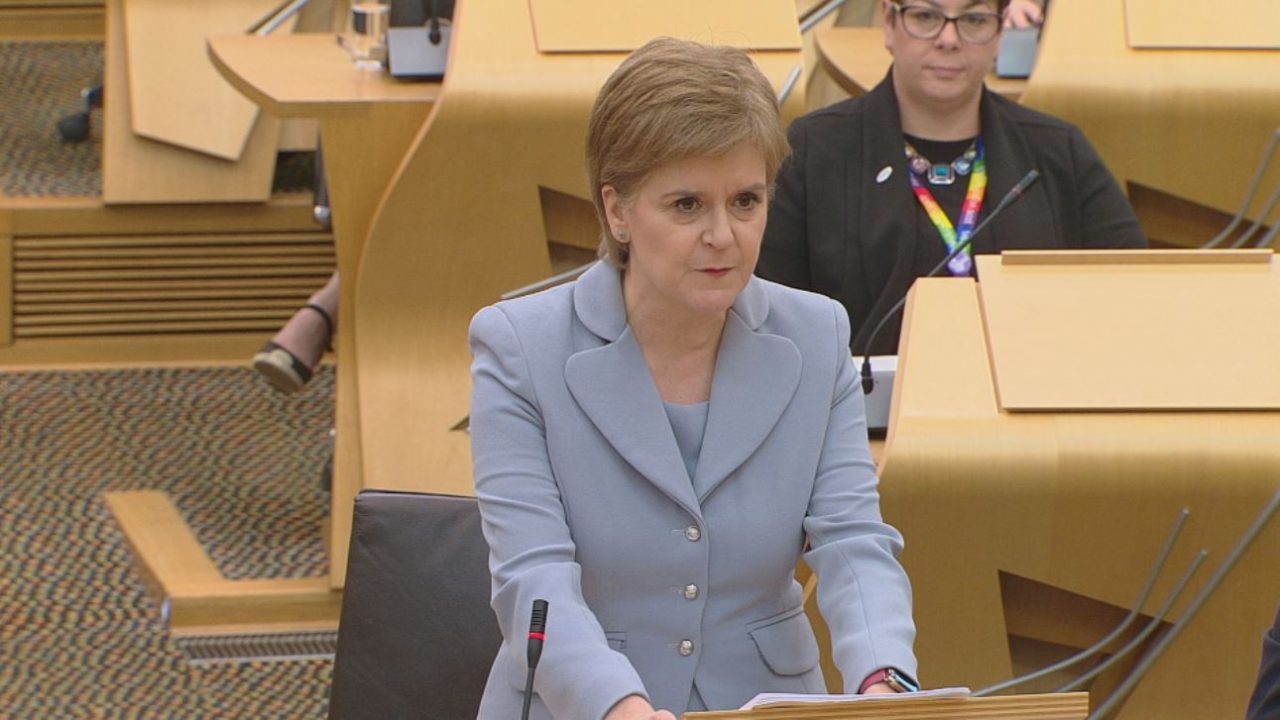 Nicola Sturgeon has announced the date for a second Scottish independence referendum.

In a statement at the Scottish Parliament, the First Minister set out the route map for holding a vote on the issue on October 19 next year.

The SNP leader said that the question asked in the referendum would also be the same as that which was asked in 2014 – ‘Should Scotland be an independent country?’.

Addressing MSPs, she insisted that an unlawful referendum would “not be deliverable”, with the result not being recognised internationally.

However, she told Holyrood that legislation will be introduced at the Scottish Parliament in order to allow people in Scotland to vote on the question of Scottish independence.

Scottish Conservative Douglas Ross said that the First Minister was putting her plans to “divide Scotland front and centre”.

And he accused the SNP of having a “selfish obsession with another divisive referendum” as always being the party’s top priority.

“Last May, the people of Scotland said yes to an independence referendum by electing a clear majority of MSPs committed to that outcome,” Sturgeon told MSPs.

“The democratic decision was clear.”

Scottish Labour leader Anas Sarwar criticised the First Minister, having previously pledged that she would recovery from the coronavirus pandemic her priority.

He added: “Isn’t it the case that the pandemic Nicola that said she wanted to pull us through is gone and the partisan Nicola Sturgeon that wants to divide our country is back, pursuing a referendum that two-thirds of Scots don’t want right now?”

Following the statement, the Prime Minister’s spokesperson said that the UK Government’s position remains unchanged and the priority for them and the Scottish Government should be working together with a “relentless focus on issues that matter to people across the country”.

The SNP leader insisted that there is a mandate for a referendum to be held.

“This Parliament has a clear, democratic mandate to offer Scotland that choice,” she said.

“The UK Government, regrettably however, is refusing to respect Scottish democracy.

“That is why today’s statement is necessary. The UK and Scottish Governments should be sitting down together responsibly agreeing a process including a Section 30 Order that allows the Scottish people to decide.

“That would be the democratic way to proceed, it would be based on precedent and it would put the legal basis of a referendum beyond any doubt.

“That’s why I am writing to the Prime Minister today to inform him of the content of this statement and in that letter I will also make clear that I am ready and willing to negotiate the terms of a Section 30 Order with him.”

The First Minister set out steps to allow a referendum to take place.

She said: “What I am not willing to do, what I will never do, is allow Scottish democracy to be a prisoner of Boris Johnson or any prime minister.

“The issue of independence cannot be suppressed, it must be resolved democratically and that must be through a process that is above reproach and commands confidence.

“That is why I am setting out today the actions the Scottish Government and the Lord Advocate will take in the absence of a Section 30 Order to secure Scotland’s right to choose.”

The Prime Minister’s spokesperson said the UK Government would study the details of the proposal on a referendum in 2023 “carefully”.

Setting out the date for a vote to be held and the question to be asked, the First Minister said that a Bill on Scottish independence will be tabled at the Scottish Parliament.

“Just as in 2014 and recognised explicitly in the 2013 White Paper, a majority ‘Yes’ vote in this referendum will not in and of itself make Scotland independent.

“For Scotland to become independent following a ‘Yes’ vote, legislation would have to be passed by the UK and Scottish Parliaments.”

Sturgeon added: “There has been much commentary in recent days to the effect that a consultative referendum would not have the same status as the vote in 2014.

“That is simply wrong factually and legally. Let me be clear, the status of the referendum proposed in this Bill is exactly the same as the referendums of 1997, 2014 and 2016.”

The First Minister indicated that the Bill includes provisions for the date and question that would be asked in the referendum next year.

She said: “The Bill states that the question on the ballot paper should be just as it was in 2014 – ‘Should Scotland be an independent country?’

“Finally, the Bill includes the proposed date on which the referendum should be held.

“In line with the Government’s clear mandate, this is a date within the first half of this term of Parliament.

“I can announce that the Scottish Government is proposing that the independence referendum be held held on October 19, 2023.”

A UK Government spokesperson said: “We are clear that now is not the time to be talking about another independence referendum.

“People across Scotland want to see both of their governments working together on the issues that matter to them. That includes tackling the cost of living, ensuring energy security, leading the international response against Russia’s invasion of Ukraine and growing our economy. That remains our priority.

“A decision has been taken by the First Minister to publish a Bill, and the Lord Advocate has made a referral to the UK Supreme Court. UK Government law officers will now consider their response.”

The SNP leader addressed the question of the legality of a referendum to take place without a Section 30 Order being granted.

And she underlined the need to establish “legal fact”, as she indicated that the issue of legislative competence remains unresolved.

She said: “We know that the legislative competence of the Scottish Parliament to pass this Bill in the absence of a Section 30 Order is contested.

“We know that legislative competence can only be determined judicially and we know that for as long as there is no judicial determination, opinions will differ and doubt will continue to be cast on the lawful basis for the referendum.

“That benefits only those parties opposed to independence because it allows them to avoid the substance of the independence debate.

“Finally, we know that if this Parliament does seek to legislate without a Section 30 Order, the Bill will go to court, that is inevitable.

“The only questions are when it ends up in court and at whose hand. If the issue of legislative competence remains unresolved at the point of formal introduction of a Bill, the UK Government will almost certainly use Section 33 of the Scotland Act to refer it to the Supreme Court after it has passed.

“It is also possible that one or more private individuals will launch a judicial review of the Bill, indeed it was reported last week that Tory supporters are already planning to do so.

“A challenge by private individuals could also go through successive courts and so be a very lengthy process.

“Either way, at the point of Parliament passing the Bill, there would be no certainty about when or even if it could be implemented.

“A court challenge would still lie ahead and the timetable I have set out today would quickly become difficult to deliver.

“And of course between now and then, claim and counter-claim, good faith arguments and bad faith fear-mongering about so-called wildcat referendums will continue to muddy the water, cast up doubt and taint the process.”

“The fact is neither legal opinions nor political arguments will resolve this point, we must establish legal fact.

“That is why in my view we must seek now to accelerate to the point when we have legal clarity, legal fact.

“And crucially in doing so, I hope establish and safeguard the ability of this Parliament to deliver a referendum on the date proposed.”

The First Minister told MSPs that she had asked the Lord Advocate to consider exercising powers under the Scotland Act to refer to the Supreme Court whether the questions of the Bill relate to reserved matters.

She explained that in doing so, it would help to “deliver clarity and legal certainty”.

And the SNP leader said it is the Government’s hope that the referendum would be deemed to be within the legislative competence of the Scottish Parliament.

If it is deemed to be so, the First Minister, there would be “no doubt whatsoever” that the referendum is lawful.

The Scottish Government would then immediately introduce the Bill and ask Parliament to pass it on a timescale allowing the referendum to take place on October 19 next year.

However, she acknowledged that the Supreme Court could decide that the Scottish Parliament does not have the power to legislate even for a consultative referendum.

“To be clear, if that happens, it will be the fault of Westminster legislation, not the court,” the First Minister said.

“Obviously, that would not be the clarity we hope for, but if that is what the law establishing this Parliament really means, it is better to have that clarity sooner rather than later.

“Because what it will clarify is this – any notion of the UK as a voluntary union of nations is a fiction. Any suggestion that the UK is a partnership of equals is false.

“Instead, we will be confronted with this reality – no matter how Scotland votes, regardless of what future we desire for our country, Westminster can block and overrule, Westminster will always have the final say.

“There would be few stronger or more powerful arguments for independence than that and it would not be the end of the matter, far from it.”

The First Minister insisted that if there is no lawful path to hold a referendum, the next general election would be a “de-facto” referendum on independence.

She said: “Although it describes a scenario that I hope does not arise, but if it does transpire that there is no lawful way for this Parliament to give the people of Scotland the choice of independence in a referendum.

“And if the UK Government continues to deny a Section 30 Order, my party will fight the UK general election on this single question – should Scotland be an independent country?”