Ian Hislop: Political satire is harder work than it used to be

Private Eye editor tells Scotland Tonight the current political climate in the UK has made his job more difficult. 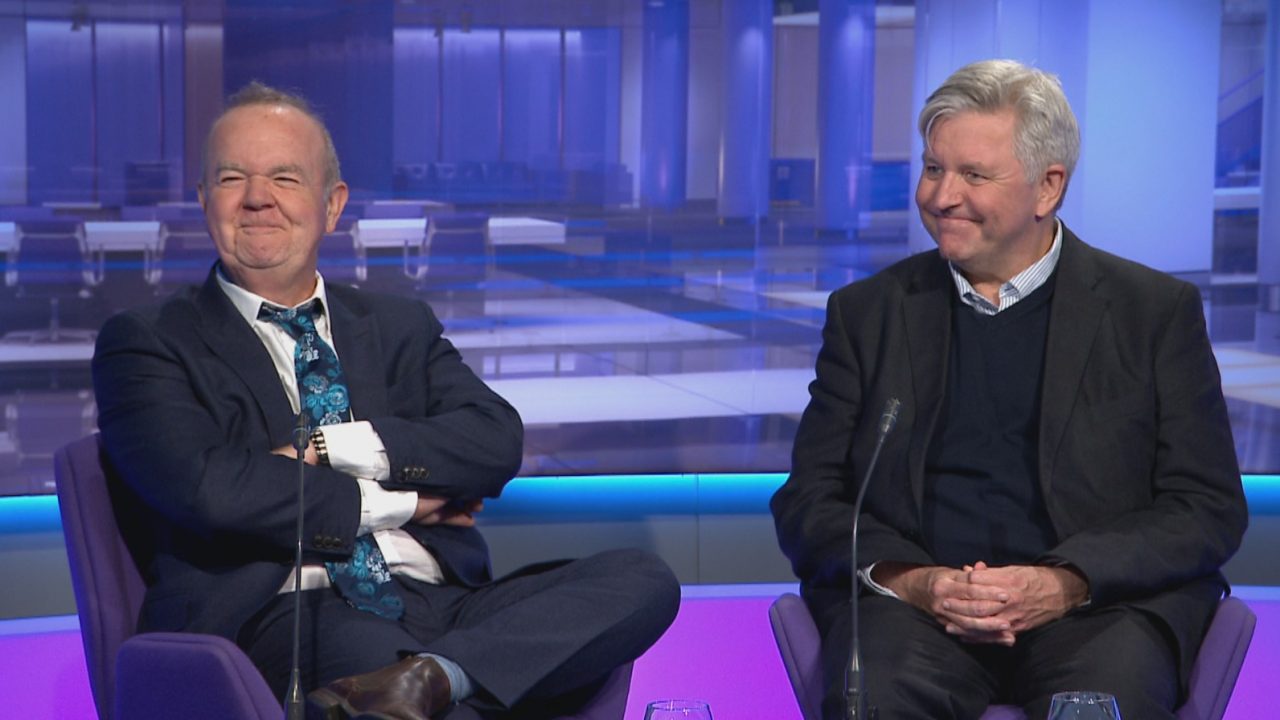 The Private Eye editor and host of comedy quiz show Have I Got News For You told Scotland Tonight says he has to put in extra effort because the antics of politicians in the real world is often beyond parody.

“You have to work harder because they’re (politicians) trying to do it themselves. But it’s still perfectly possible,” he said.

Hislop and his writing partner, Nick Newman, joined John Mackay on STV’s current affairs show on Tuesday evening. Newman is a satirical cartoonist for Private Eye and The Sunday Times.

Hislop, who has been the editor of satirical magazine Private Eye for 36 years, is often reported as the “most sued man in Britain”.

“I’m sure I’ve lost the record – very, very happily,” he said. “There was a mad period in the 80s and 90s where libel was just like the Wild West.

“Nowadays, it’s all privacy and confidentiality. As a journalist if you try and find out about anything, any sort of government department that outsources anything, they say: ‘Oh no, that’s confidential’. And you say: ‘Well isn’t it our money?’ And they go: ‘No, it’s secret.’ And it doesn’t matter if it’s true or not.

‘It concerns me in that it’s unjust and unfair. But you get used to it.”

The pair have reunited to write their fourth play together, SPIKE, which seeks to put Irish actor and comedian Spike Milligan under the lens.

Milligan is most famous for writing and performing the Goon Shows of the 1950s. The radio show, which ran for nearly 10 years and aired more than 200 episodes, starred fellow comedy greats Peter Sellers and Harry Secombe.

Milligan has been touted as the godfather of comedy. “Almost everybody in British comedy since he put the Goons on radio has acknowledged a debt to him,” said Hislop.

Newman described Milligan’s humour as “very anarchic and very surreal with elements of silliness”. Milligan’s subversive comedy was renowned, with one Goons show episode featuring a parody of the Queen’s coronation just a year after the event.

Commenting on Milligan’s boldness, Hislop said: “We think we’re in an age of deference and in the old days everyone was very respectful. It just isn’t true.”

What do the pair think Milligan would make of today’s politics?

Newman told Scotland Tonight: “Spike’s view was the world was run by idiots. And nothing in the last few weeks would suggest otherwise.”

Hislop and Newman have worked together since they were schoolmates. They both attended Oxford University and have worked together at Private Eye and Spitting Image. Their previous stage collaborations include The Wipers Times, Trial By Laughter and A Bunch of Amateurs.

Both satirists consider Milligan an inspiration.

Newman recalled Milligan’s lesser-known work as a cartoonist. “It was one of the great joys of discovering about Spike the more research we did – he did quite a few cartoons for Private Eye in the 60s and 70s. And one of the joys as a young cartoonist was that they were very badly drawn…”

Hislop added: “It was an inspiration.”

Hislop started his relationship with Milligan when he first became editor of Private Eye. The publication’s previous editor, Richard Ingrams, advised Hislop to print everything Milligan sent him.

Hislop said: “Spike used to ring up Private Eye, the offices, and you knew it was Spike because he’d pick up the phone and go ‘Bloody BBC’. And that was it, that was the introduction.”

SPIKE runs at The Kings Theatre in Glasgow from Tuesday, November 1 until Saturday, November 5. Newman says he hopes audiences “come out with a very warm glow in your belly, because it will save you on your heating bills”.