Nicola Sturgeon said a failure to accept democracy by the UK Government would be completely unacceptable. 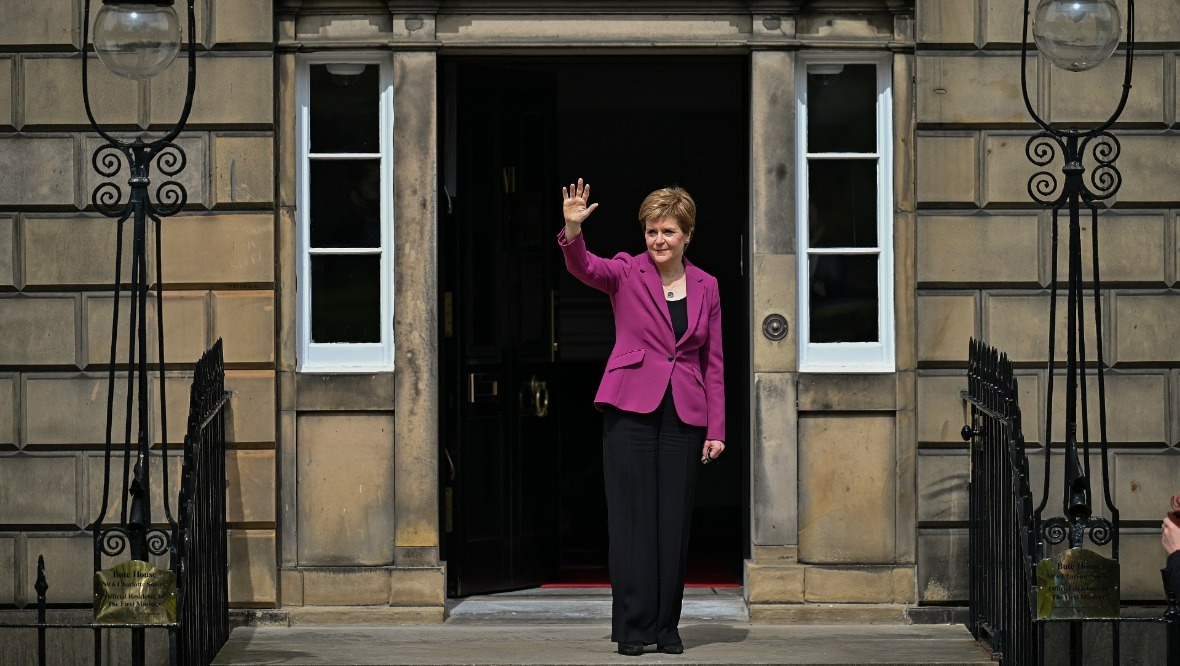 Holyrood will decide the timing of a Scottish independence referendum but the recovery from coronavirus will come first, Nicola Sturgeon has said.

The SNP leader, speaking after her party’s election victory, insisted that the UK Government now faces a question of whether it accepts democracy or not.

Speaking to STV News, Ms Sturgeon also said she would be willing to hold talks with the Scottish Greens over a coalition agreement, but indicated that she would be able to govern as a single party.

Asked about the timescale for a future referendum, Ms Sturgeon said: “That will not just be a judgement for me, the Scottish Parliament, which of course now has a majority, a bigger majority, of MSPs in favour of an independence referendum than was the case before the election.

“So, the Parliament will judge when the time is right. I indicated in our manifesto that if the Covid conditions allow, I would like that to be in the first half of this Parliamentary term, but Covid comes first.

“The country getting through and out of this crisis comes first. When I said that on the campaign, I meant it, and that’s why I’m going straight back to work to continue that job of getting us through this situation.”

She continued: “We’ve got a difficult few months still ahead of us, we’re in a good position with Covid.

“I hope everything is going firmly in the right direction, but we’ve got to make sure that that continues to be the case and that we get on with the job of delivering that 100-days plan, getting our recovery from Covid underway.

“The legislation, if a referendum is to be delivered within the first half of this Parliament, which is my preference Covid-permitting, we have to introduce the legislation in a timeframe to facilitate that happening.

“But of course, these will be decisions for the whole Parliament once it is back in operation next week.”

Ms Sturgeon said the only people with the right to determine Scotland’s future will be the people of Scotland.

Asked about the UK Government potentially challenging a move to hold a referendum, she said: “If we end up in court, which is not something I want to see, that would only be because we’d a UK Government that refused to accept Scottish democracy and I think that would be an absurd, outrageous and completely unacceptable position for them to be in.

“I support independence, the UK Government oppose independence, that’s legitimate, but the only people who have the right to decide that question are the people of Scotland and the way to do that is in a referendum.

“So, you know, this discussion that often dominates the debate about independence – ‘will the UK Government permit a referendum?’ – you know, is predicated on a lack of basic respect for Scottish democracy.”

She added: “So, the question for the UK Government is a simple one and it should not be a controversial one – do they accept democracy or don’t they?

“And I hope that, however they might couch that at this stage, they will accept democracy because anything else is just completely unacceptable.”

The SNP leader indicated that divisions over the question of independence in Scotland is a case for, not against, a vote being held.

“Having a referendum does not automatically mean that Scotland becomes independent,” Ms Sturgeon said.

“Scotland will only become independent if I can persuade, if the SNP and the Yes movement can persuade a majority.

“That again is also a fundamental principle of democracy”

Ms Sturgeon continued: “The mandate is there, the majority in the Parliament is there. That doesn’t mean Scotland automatically becomes independent, but it does mean that it is for the Scottish people to decide.

“And it strikes me that this argument – ‘Scotland is divided and split on the question of independence’ – is not an argument against the referendum, it’s an argument for allowing that to be determined democratically.

“Because otherwise it’s politicians who make that decision and that is not right.”

Asked about the prospects of a coalition agreement with the Scottish Greens, Ms Sturgeon said: “I think on the numbers governing as a minority just short of a majority  is not something that phases me, it is possibly the outcome we will see.

“I’m open to that discussion. We, of course, both want to see that independence referendum when the time is right.

“So, I’m sure we’ll have discussions and we’ll see what the outcome of those discussions are, but there’s no reason for me to feel that I am not perfectly able to govern as a single party government.”

Asked about the failure of Alex Salmond’s Alba party to win a seat, she said: “I didn’t support Alba, I didn’t think the approach they were taking to the election, to independence, was the right one.

“But I can say, and I say this personally more than politically, there is not a single thing that has happened around Alex Salmond from the past few years that I take any pleasure in whatsoever.

“The situation with the breakdown of my relationship with him is a source of nothing but sadness for me and that is my overwhelming emotion about the whole thing.”