From Monday countries around the world will be sorted into lists depending on the state of the pandemic within their borders. 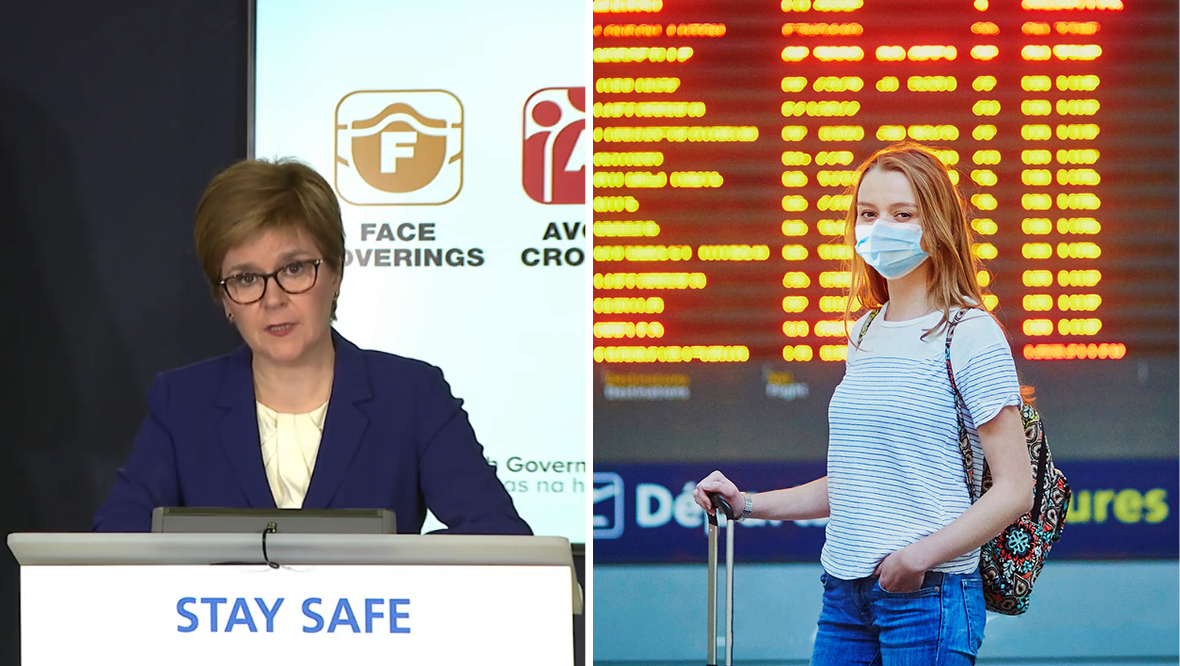 Nicola Sturgeon has confirmed Scotland will join with the rest of the UK in implementing a ‘traffic light system’ for international travel from next week.

From Monday, May 17, countries around the world will be sorted into lists depending on the state of the pandemic within their borders.

On Friday, UK transport secretary Grant Shapps announced the 12 countries and territories on the green list of the traffic light system – visits to which would have no quarantine requirement – and the First Minister confirmed they were the same for Scotland.

Although there is no quarantine requirement for these countries, travellers will be expected to take a PCR test for coronavirus. The First Minister also said that the green list countries would be the “exception not the rule” with most destinations instead appearing on the amber list.

Sturgeon also announced the three counties currently on the red list, visits to which require managed isolation in a quarantine hotel for ten days at the cost of £1750 for a solo traveller.

Those red list destinations are Turkey, Nepal and the Maldives.

The First Minister said that most countries will be on the amber list, visits to which will require self-isolation at home with two PCR tests taken during that period.

Concerns have been raised over the cost of PCR tests, with private tests costing as much as £120 on the high street. However, airlines, airports and holiday companies have been offering cheaper test packages to travellers with many costing around £60.

At the coronavirus briefing on Tuesday afternoon, the First Minister said: “Let me be very, very clear… we still intend to be highly cautious on international travel given the risk of new variants.

“We have a consistent four-nations position, made possible because the decisions the UK Government has arrived at are appropriately cautious.”

But Sturgeon said that should the situation change and a different approach would be better for Scotland, then decisions will be made that “are right for Scotland”.

Despite the changes, the First Minister asked Scots to err on the side of caution and staycation this summer.

She said: “Even though the rules on non-essential travel are changing, everyone should think seriously about whether they need to travel abroad this summer.”

Responding to the First Minister’s announcement, Airlines UK, AGS Airports and Edinburgh Airport issued a joint statement calling the lack of countries on the green list a “missed opportunity”.

It read: “We are again in the position of being a week away from a major change to operations and are waiting on details of how the Scottish Government wants this to work and how it will be managed. We need that detail as soon as possible to allow everyone to understand what is required.

“We appreciate there are many things to consider but we encourage the Scottish Government to work with us on making testing more affordable rather than it being a barrier for those who need and want to travel. We would also encourage government to take advantage of the vaccination rollout to open up many more green countries in the EU at the new review point in three weeks, as the EU themselves have proposed, and to work where possible as the four nations to ensure consistency and avoid confusion for operators and passengers.

“The Scottish Government must also be very clear about when and how we can encourage visitors from green list countries to try and save the thousands of jobs in Scotland that depend upon international travellers.”

Joanne Dooey, president of the SPAA, said: “The inclusion of Portugal on this list is very significant and important for Scotland – it’s one of the most popular holiday destinations for Scots ranking in the top choices along with Spain, Greece and Turkey.

“We expect to see airlines and operators transferring any spare capacity to flights to Portugal this summer and consequently travel agents across Scotland are ready to advise travellers and to help them to make their plans safely.

“PCR tests remain an expensive option, particularly for those travelling as a family group. Our position remains that the cost of testing – particularly the requirement for a PCR test for each traveller on return to the UK – is too high and that affordable testing in the form of antigen and lateral flow is needed.”

Scotland’s tourism industry also welcomed the changes, noting that the found-nations approach is an important step.

Marc Crothall, CEO Scottish Tourism Alliance, said: “The loss of inbound travel has had a critical impact on so many businesses across different sectors within Scotland’s tourism industry and I know that there will be some relief for many.

“Forty-three percent of overnight tourism spend in Scotland comes from our international market; it would require around seven million domestic overnight stays to replace that lost income.

“From  the research the STA has undertaken which we will be releasing this week, we can see that we are quite some way from the staycation tourism boom that has been referenced in various media reports and by other commentators recently.”