Hospitals across Scotland are at 95% capacity, the First Minister warned. 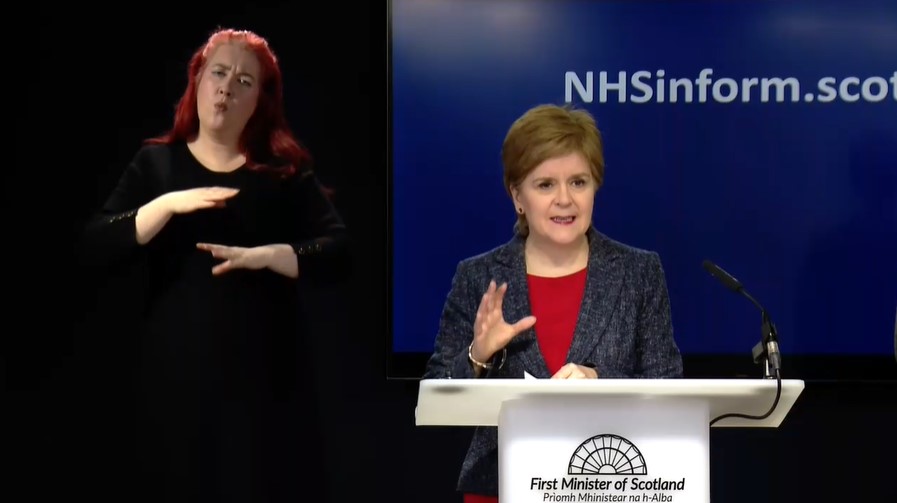 Scots are being urged to wear face masks in public indoor spaces in a bid to alleviate pressure on the NHS – with hospitals almost at full capacity.

First Minister Nicola Sturgeon said anyone with symptoms of a respiratory infection – a cold, flu or Covid – should stay at home if possible and wear a face covering if they do need to go out.

More generally, she said people should wear masks on public transport and in public indoor spaces such as hospitals, GP surgeries and other healthcare facilities.

Speaking at a government briefing, she said: “In addition to Covid, the country has been experiencing extraordinary levels of winter flu – more than 1,000 patients were admitted to hospital with flu during each of the last two weeks.

“And finally, there has also been a rising number of cases of Strep A and other respiratory viruses, resulting in a significant demand for services.

“The impact of this combination of Covid, flu and Strep A is clear in the statistics measuring demand for health services.

“The reality hospitals right now are currently almost completely full. Last Wednesday, hospital bed occupancy across Scotland exceeded 95%. Now for context, at the same stage in 2020, before the pandemic struck, occupancy was around 87%.

“In the final week of 2022, the ONS estimated that one in every 25 people in Scotland had Covid. In total, there are right now more than 1,200 patients with Covid in our hospitals and, for context, that is double the number four weeks ago.

Sturgeon was speaking at a briefing alongside health secretary Humza Yousaf and the deputy chief medical officer Graham Ellis.

She said she understood the concerns and anxieties of clinicians and staff working in the NHS, after the British Medical Association (BMA) claimed that “real harm” was coming to patients and staff as a result of an “unprecedented crisis”.

“It is a statement of the obvious that working with the scale of pressures that are being experienced right now is an incredibly difficult task,” she said.

“I also want to acknowledge, because I think it is important that we do so, that the NHS was under pressure before Covid struck us.

“Changing demographics and ever increasing expectations of what healthcare advances can deliver, which of course in themselves are positive developments, were posing challenges for the NHS and necessitating reforms to care pathways.

“That said, Covid, and I think we know and understand it, represented a significant shock to the system and its ongoing impact together with associated backlogs, coupled with extraordinary levels of other illnesses this winter, is creating pressure that is truly unprecedented.”

Sturgeon said “extraordinary levels of winter flu” and rising Strep A cases were to blame for high hospital occupancy rates, alongside delayed discharges – where a patient is ready to leave hospital but cannot because the necessary care package or accommodation is not available.

An estimated 1,700 people are still in hospital but are ready for discharge, she said.

To alleviate pressures, Sturgeon said “immediate extra funding” will be provided to health and social care partnerships to support the booking of additional care home beds for patients to be discharged to while they await an appropriate care package.

Additional staff for the NHS 24 service is also set to increase in the coming weeks after workforce numbers were increased prior to the festive period to reduce the need for hospital visits.

The Scottish Government is also working with health boards to assess initiatives such as extending GP opening hours to Saturdays, as announced by NHS Lanarkshire last week.

Sturgeon said: “I can confirm that we will be providing immediate extra funding to health and social care partnerships to support the booking of additional care home beds for patients to be discharged to while their care packages are being finalised.

“That will benefit patients, I think it’s important to note that first and foremost, but it will also free up much-needed capacity in hospitals.”

‘Too little, too late’

The Scottish Conservatives described the briefing as a “PR exercise”, which was “too little, too late”.

Shadow health secretary Sandesh Gulhane said: “Nicola Sturgeon was full of sympathy for let-down patients and warm words for over-stretched staff – but there were precious few concrete measures to turn things around.

“This PR exercise was too little, too late.

“She and Humza Yousaf remain in denial of the fact that they’ve been caught off guard by the extent of the demands on the NHS this winter, despite the fact that they were warned of what was looming well in advance.

“While she recognised that most of the capacity problems stem from the SNP’s failure to tackle delayed discharge, she refuses to drop her reckless plans for a wasteful, centralised National Care Service.

“This beggars belief when he has lost the confidence of NHS staff and his flimsy recovery plan has been found desperately wanting.

“But the fact that Nicola Sturgeon barely let him get a word in edge ways suggests she doesn’t truly have faith in him either.”

She said: “Faced with the most difficult winter in NHS history, the SNP are deflecting blame and rehashing the same old promises they have been making for years.

“These changes will barely scratch the surface of this deadly crisis and fail to grapple with the major structural problems clinicians are raising.

“Instead of quietly side-lining her own health secretary, Nicola Sturgeon needs to sack Humza Yousaf and appoint someone up to the job.

“We can’t keep teetering on the brink of disaster – we need action now to support health and social care workers, drive down waiting lists, invest in social care, and tackle delayed discharge for good.”