STV will host a series of interviews with the main political party leaders ahead of May's Holyrood election. 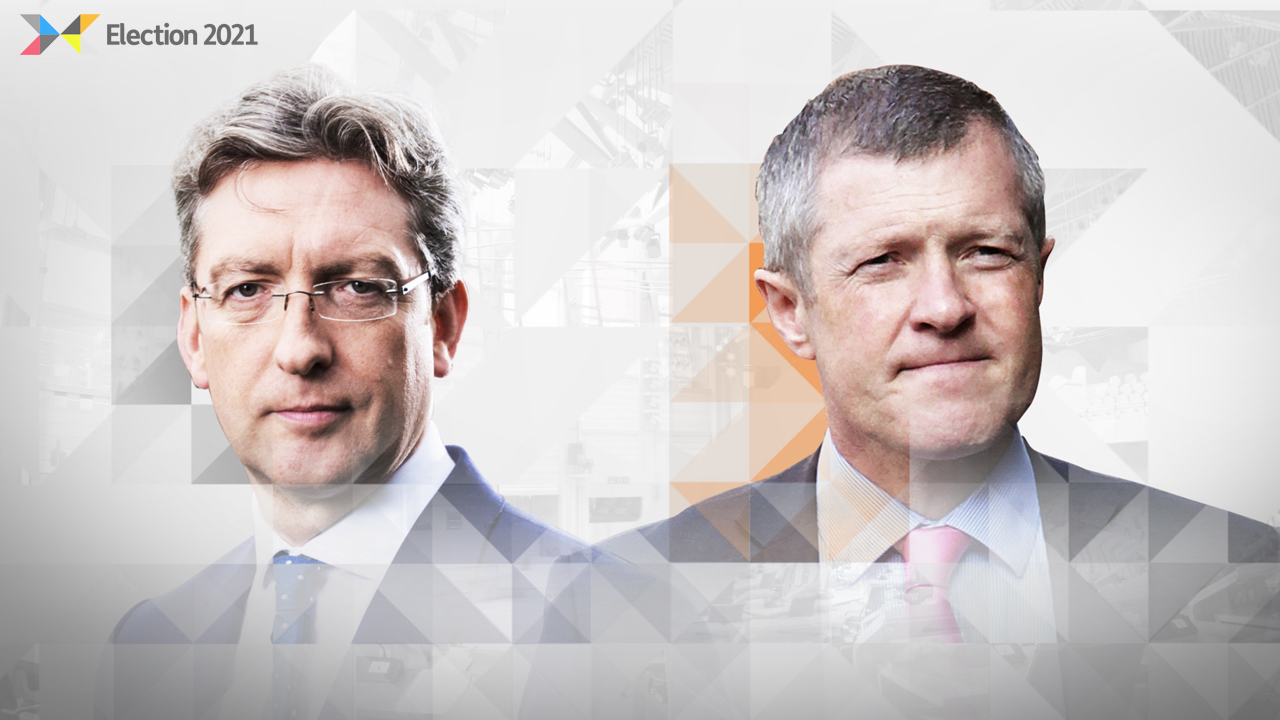 Over the coming weeks STV will be hosting a series of exclusive interviews with the main political party leaders taking part in May’s Holyrood elections.

First up is leader of the Scottish Liberal Democrats, Willie Rennie, who sat down with political correspondent Colin Mackay to outline the party’s message and vision for the country.

Colin MacKay: Since devolution the Liberal Democrats have gone from a party of government in the first two terms of the Scottish Parliament to just five MSPs in the last two terms. Willie Rennie what have you got to turn it around this time?

Willie Rennie: You’ve been ignoring the progress Colin we’ve been making in recent years. We gained three MPs in the 2017 election; we had a great European election result in [2019], where we gained an MEP. And we’ve been winning by elections across the country, including in Perth, recently, where we went from third place to beating the SNP.

CM: What have you been doing to attract voters this time?

WR: Our message this time is incredibly powerful. It’s about recovery. It’s about putting the divisions of Independence, the exhaustion of the pandemic behind us and focusing on recovery. On things like mental health and creating jobs, taking action on the climate but also bounce back on support for education. Those are the things I think people in Scotland want. And that’s why I think we are going to grow in this election.

CM: In terms of bounce back for education, one of the things that you claim credit for is that pupil equity fund isn’t it? That’s something you want to focus on them?

WR: Oh, absolutely. We’ve been talking about making it a permanent fund, so that we can employ permanent teachers. Did you know Colin, that the number of temporary teachers on short term contracts has mushroomed up to 5000. Casual contracts, we need to change that to give every possible teacher a job and to cut to class sizes, and give in-school support for pupils to make sure we can bounce back from the terrible year that we’ve had. So the pupil equity fund is a very important thing. In fact, we got a pupil equity fund premium in the budget this year in negotiating decisions with the SNP. So that’s progress.

WR: Yes, but there are many things within a budget.

CM: So can you claim credit for something you voted against?

WR: We argued for it for many years. In fact, in England, where it was a great success, and in Wales, when we were in government as well, we’ve made good progress as well, with the pupil premium and the equivalent was brought up here. So yes, we can claim credit for it, because we persuaded the SNP government to do it.

CM: Closing the attainment gap is something that will be big for you?!

WR: Well, actually, yes, because we’ve seen in the latest figures that the gap at level five in schools is a 36 point gap. It will take 35 years to close that gap. We need to make much faster progress than we have so far. So yes, we do.

CM: So you will be disappointed in the Audit Scotland report recently that showed there are some but not enough progress and talking about that level five for people leaving school with just one award, Perth and Kinross, Highland, Angus all councils where the Lib Dems are involved in the administration. All went down.

CM: But the councils which you’re involved with did not improve.

WR: In Scotland, there’s been a problem; the attainment gap is 36 points. It’s closed slightly, but at that rate, it’s going to take many, many years to resolve.

CM: But other councils are similarly restrained, but yet they improve.

WR: No, the overall policy across Scotland is not improving fast enough. And we need to make that progress.

CM: Okay, another factor is poverty. You backed at the doubling of the child payment for the poorest families, don’t you?

CM: But at a press release on Friday, your party said that they would use the child payment to tackle child poverty. On Monday, after the First Minister announced doubling it, you said you were committed to doubling the child payment. Looks like you were just reacting to her announcement doesn’t it?

WR: we haven’t published our manifesto yet Colin.

CM: But the thing is, you must have known that yourself on Friday. When you put that press statement out?!

WR: We think it’s a good idea. We will announce it in our Manifesto. And that’s very clear what the Liberal Democrats are committed to, because we need to check tackle child poverty, there has not been sufficient progress made in Scotland. And we need to make that happen. And one of the processes we need to do, is not just about boosting education, which will help overall of young people but also the child payment.

CM: Labour and the greens haven’t published their manifestos. But they had already told us that they were wanting to double it to 20 pounds. Are you just copying them?

WR: No, we publish our announcements when we’re ready. It’s important that we have a programme in the election campaign. And that’s what we will set out in the manifesto.

CM: In that Monday, press release, you said increasing the child payment to 30 pounds would be enough to ensure Scotland’s poverty targets are met. So why are you only doubling to 20 pounds?

CM: So you’re deliberately keeping 40,000 children in poverty that you could help by already doubling it?

WR: You are just identifying one particular policy, we have a range of policies that will be announced in the manifesto that will contribute towards the elimination of poverty in Scotland, and because that’s the kind of thing we need to do.

CM: But in your own press release, you said you could do it at a stroke, but you’re not doing it?

WR: But you are ignoring the range of policies which are going to have in the manifesto.

CM: I’m not ignoring them. I haven’t seen them.

WR: Exactly. And that’s when it will come out. And it will show we’ve got a range of policies that will deal with poverty in Scotland, because it’s an important issue for the Liberal Democrats.

CM: But surely, when the Lib Dems were in coalition with the conservatives at Westminster backing Universal Credit, you’ve contributed to some of this poverty?

WR: Universal Credit as a fundamental policy is fine. It’s the way it was implemented. We did make progress in trying to get a comprehensive system that reflected the needs of people that made sure that when they were back to work, they didn’t lose all the benefits at once, and made sure it was simplified and helps people. What the result was that George Osborne and Ian Duncan Smith, cut the welfare budget to such an extent that the Universal Credit system was undermined. That was the problem.

CM: What about a threat to the union? How big is it to the election?

WR: I think it is diminishing.

CM: Do you think the threat to the union is diminishing?

WR: I think the support for independence is on the decline. And I think at the heart of that is that people are exhausted with the last 10 years of in arguments of independence and the pandemic in the last year. They want to focus on recovery. And that’s what we want to do. But we’ve also seen the arguments within the SNP. The SNP have lost control of the nationalist movement. They have lost control of the strategy. And I think, therefore, it’s causing people to be alarmed that the strategy is going to lead to an early referendum, which is what they are arguing for, which is what people in Scotland do not want.

CM: Is that why you won’t talk to conservative leader Douglas Ross, you just don’t think there’s a risk?

WR: I think Douglas Ross and the conservatives are part of the problem. Not part of the solution. It was the conservatives that brought us Brexit in the middle of a pandemic; it was a reckless thing to do. And therefore he is not capable of bringing the country together. He does not have broad enough appeal to try and win people back from those that are supporting independence to make sure we can secure the United Kingdom. That has got to be the agenda.

CM: Do you think he’s putting the union at risk?

WR: I think Douglas Ross’s approach is reckless. I think his approach is looking for a core vote strategy. He’s not looking for an interest in bringing people across. He is not interested in uniting the country. We saw in the debate just recently, where he was more interested in attacking myself and the Labour Party, rather than trying to persuade people to come back from the SNP.

CM: Alistair Carmichael says that his politics are far too dark and divisive. What does he mean by that?

WR: I think you probably saw the interview. He was asked if he was Prime Minister, what would be the first thing he would do? He said I would clamp down on gypsy travellers. That was quite a dark thing to say. And I think it’s not the kind of politics that Liberal Democrats or liberals are in favour of.

CM: So you wouldn’t partake in tactical voting to help them?

WR: I don’t think I would urge that in any sense.

CM: But you would hope other areas and conservatives would vote for Lib Dem. It goes both ways.

WR: People are intelligent and people understand how to use their votes in different parts of the country to have the biggest effect.

WR: Don’t be so gloomy Colin. The opportunity for the Liberal Democrats in this campaign are great. We are making great progress. We’ve got the best campaign I think we’ve had for years. We’ve got more top women in winnable seats than ever before. We’ve won by-elections.

WR: But in the top positions where they are likely to win, we’ve got women we are going to be a much more diverse party at the end of this process.

CM: You’re talking about your campaign. You’ve had a giant deck chair, a giant trampoline, a giant chessboard. Are you trying to show that you’re small or that your party is small, tiny Willie Rennie?

WR: We’ve got a vast idea of ideas for the country. We’re going to take the country forward. I’ve explained some of them today. Putting Recovery First, about investing in mental health services, about creating jobs for people desperate for work. It’s about action on the climate. And it’s about bounce back for education. That’s an attractive agenda that is going to gain more votes.

Join the Scotland Tonight team again next week for the second part in the series of leader interviews ahead of May’s elections.