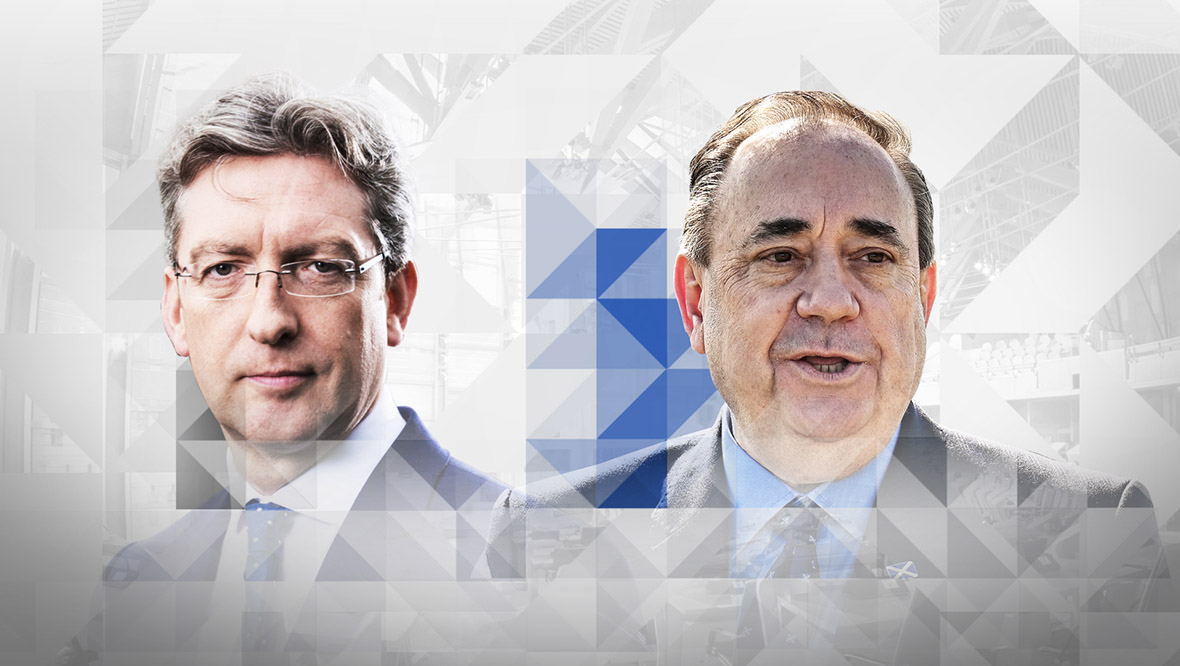 Over the last few weeks, STV has hosted a series of exclusive interviews with the main political party leaders taking part in May’s Holyrood elections.

Next in the series is Alba leader Alex Salmond, who sat down with STV News political editor Colin Mackay to outline the newly-formed party’s message and vision for the country.

Colin Mackay: Alex Salmond, why is Alba needed at this election?

Alex Salmond: In one word: urgency. Urgency about Scottish independence. To re-inject urgency into the independence campaign. That’s the opportunity that Scots have in the list vote in this election. And that’s why Alba is required.

CM: But you say if you get elected you would table a motion instructing the Scottish Government to immediately begin independence negotiations with Westminster. The only MSPs who would back you in that would be Alba MSPs. Nobody else would back you on it, would they?. So it’s meaningless…

AS: Well, it will depend on the result of the election Colin. If Alba get a fair win, then I suspect that you will find the other independence supporting parties will reprioritise their view on independence. Therefore, I expect in two weeks time if I am elected along with other Alba MSPs and we table that motion, we might find support from surprising quarters. But it’s up to the people to vote for Alba to inject the urgency that, I believe, so many want to see in the independence campaign.

CM: But it would be very surprising if SNP MSPs or Green MSPs went along with what you told them to do, wouldn’t it?

AS: Well, why would an independence supporting MSP not want to support a motion injecting urgency into the campaign? Now clearly this is dependent on Alba being elected. If we are elected that’s an indication that the Scottish people want that requisite urgency. Therefore with that wind behind our backs then I’m certain we would get support. I think lots of SNP MSPs would like to see that urgency. I agree I am less certain about the Green Party but they’ve been lukewarm about independence for some considerable time.

CM: But you want the same powers to hold a referendum that you had in 2014. But if Boris Johnson keeps saying no, your manifesto says “you’d consider another plebiscite or another democratic test”. What do you mean by that?

AS: Well, first of all, let’s take Boris Johnson. People keep telling me what an immovable object Boris Johnson will be. I think a puff of wind would blow him over at the present moment. I’m not sure he will be in Downing Street in two weeks’ time, so I don’t think moving Boris Johnson on the independence referendum is going to be as difficult as many people feel it is. But unless you start that process, you’re never going to finish it. In terms of a democratic test, you should keep your options open. You don’t set your ambition for a Section 30 referendum. That’s just an invitation for Whitehall to turn it down.

CM: What do you mean by a plebiscite or another democratic test? Does it mean a wildcat referendum as what the Conservatives would call it?

AS: Well, the Conservatives can call it what they like…

CM: But is that what it means? We’re looking at this election next week. What would a plebiscite or another democratic test mean?

AS: Well, a plebiscite means a referendum organised by the Scottish Parliament. That’s what David Cameron thought I was going to do in 2012 and was one of the reasons why he accepted the idea of the Section 30 referendum. In a negotiation, you don’t always tell the other side what your aims and ambitions are. That’s an invitation for them to say no to you. You have to have other things up your sleeve. Plan B as it is sometimes called. I think you need Plan C, D and E as well when you’re facing down Westminster. But it’s going to be a lot easier to face down Westminster if there’s a substantial majority, a supermajority of independence supporting MSPs.

CM: Because you didn’t have a plan B when it came to currency the last time you were asked. But this is something you do have a Plan B on?…

AS: Well, I think it’s best to go into negotiation and get…

CM: But you’re not going into the negotiations…

AS: Well, one of the arguments that Alba are making is we should make this a negotiation conducted by the Parliament, not by a single political party. I think it would be a mistake to allow Boris Johnson to say this is SNP against the Tories; Prime Minister against First Minister, there should be a massive supermajority in the Scottish Parliament, representing the Scottish nation. That’s how this debate should be cast if we want to win it.

CM: Have you got a bet on Alba at this election?

AS: Well, I haven’t managed to do that yet. I saw that we’ve come down and overtaken, I think it’s the Greens and the Liberal Party is potentially the most seats after the SNP in the odds. And the odds still look quite attractive to me. So who knows Colin, I may well do before polling day.

CM: But of all the polls, there’s only one pollster suggesting that you’re going to get any seats at all. You must be kind of disappointed by that?

AS: Well, not quite right. The Times poll suggested we pick up a seat in the Highlands and Islands. But the latest poll, the panel-based poll…

CM: That was a very small sample in the Highlands and Islands, which isn’t properly representative. There’s only one poll across Scotland suggesting you’re going to get any MSPs at all…

AS: I’m not putting my faith in opinion polls. I’m putting it in the communities of Scotland and the reaction that Alba’s getting. I think Alba is rising. And I think next week the results will bear that out.

AS: No, I explicitly was asked at the Scottish Parliament Committee, did I think she should resign and I said no and that was always my position. I thought that other people would be more in the line of criticism. And indeed they were; that was never my ambition. But listen this election is about the national, not about the personal, this is about the future of Scotland and everybody should be able to put personal issues behind them and concentrate on Scotland’s future.

CM: Now if you do get elected, you’d be working in the same parliament where a number of the women who accused you of sexual assault work. That could be awkward for you but that could be utterly hellish for them.

AS: Well, I think the electorate will judge who does and who doesn’t serve in the Parliament. Just as the jury gave a verdict in the criminal trial over a year ago. And I think once the verdict is in everybody – everybody – should just accept it.

CM: You don’t care how awkward that is for them then?

AS: I care about lots of things Colin. But I also accept the verdicts of juries. And the overwhelming message I get is people want to see that whole episode behind us and want to move on to talk about the future of Scotland. That’s what I’m going to do and I hope everybody will do the same.

CM: Thanks for joining us on Scotland Tonight.