The First Minister announced the plans at Holyrood on Tuesday. 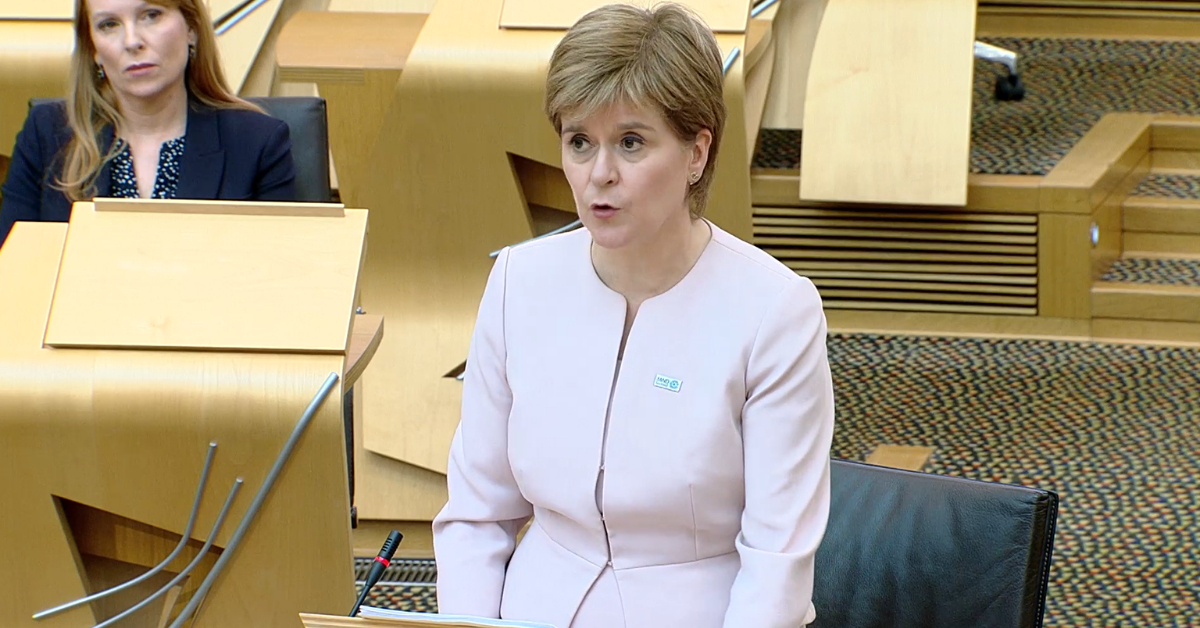 Restrictions will not be eased anywhere in Scotland as the government delays the move to level zero for at least three weeks.

However, certain rules for those organising and attending weddings and funerals will be removed from Monday.

Restrictions were scheduled to be eased on June 28, but the First Minister said this will be pushed back until July 19.

But she said the Scottish Government hopes all major remaining restrictions will be lifted on August 9.

Nicola Sturgeon said that although the current levels across the country will remain unchanged, from Monday the cap on weddings will no longer include suppliers or staff employed by the couple.

Those accompanying the couple down the aisle will no longer need to wear masks and receptions can have live entertainment – although those in attendance will still have to remain seated.

For funerals, more than one household will be able to help carry a coffin and take a cord when lowering it.

“But I hope they will make some difference to those organising and attending weddings and funerals, ahead of the more substantial changes at level zero.”

Currently only the island authorities of Orkney, Shetland and the Western Isles are in level zero with all mainland areas either under level one or level two restrictions.

Scotland has recorded four new coronavirus deaths and 2167 new cases in the past 24 hours, according to latest figures.

Sturgeon also set out what life beyond the lowest level of the government’s five tier restriction system would look like.

Following a review of physical distancing measures, the government hopes to reduce the requirement from two metres to one in indoor settings and remove it completely outdoors from as early as July 19.

The date next month is the new target for the whole country moving to level zero, but only if the vaccine rollout targets are on course.

It comes as Sturgeon said there was shift in the aim of how policy would react to the pandemic.

More normality if progress continues
Aim to lift all major restrictions on 9 August.

The whole of Scotland will move to Level 0 on 19 July if all necessary vaccination and harm reduction measures are met.

Current levels will remain in place for the next three weeks with a review taking place on 13 July although some changes, such as minor relaxations to rules on events such as weddings and funerals will come into place on 28 June.

During a statement to Parliament, First Minister Nicola Sturgeon also confirmed that from 19 July physical distancing outdoors will be removed and physical distancing for indoor public areas will reduce to one metre if the data allows. Limits on outdoor gatherings will also be removed on this date given the reduced risk of outdoor transmission at this stage in the vaccination programme.

If the necessary conditions on vaccination and harm reduction continue to be met, all major remaining COVID restrictions will be lifted on 9 August.

“This change reflects the fact that vaccination is reducing – we hope significantly – the harm that the virus causes.”

She said as vaccinations bear more of the load of controlling the virus, the legal requirment to phyiscally distance will be reduced in the hope of removing it entirely in August.

End of restrictions in sight despite surge in cases

On the day Scotland has recorded its highest Covid case numbers since January how can the First Minister set out plans to go to level zero on July 19, cutting distancing; and beyond that on August 9 with no distancing at all?

Good question! The First Minister says it is all down to the vaccine. Although case numbers are high, fewer people are ending up in hospital, when they do they are in for a much shorter time, and, crucially, fewer are dying. So the NHS is not at risk of being overwhelmed, and by the middle of August all over 40s should have had their second jag, and all over 18s should have at least had their first.

Transmission numbers are higher in some areas than others; case numbers are particularly high in Dundee and Edinburgh, so that could mean some problems for the whole of Scotland moving to level zero next month.

There is a big change in the First Minister’s statement today – from suppressing “the virus to the lowest possible level” to suppressing “the virus to a level consistent with alleviating its harms while we recover and rebuild for a better future” – In response to Patrick Harvie the FM said what has changed is the vaccine “mitigating the harms of the virus”, it sounds a lot like the vaccine is allowing us to live with Covid.

The other big change is that she seems more hopeful than cautious. More than ever since last April it seems like we are getting back to something like normal. Distancing going from two metres to one metre on July 19, to no distancing on August 9, which is quite exciting. We might still need to wear face coverings, but the new normal is within touching distance (although you should still wash your hands if you touch anything).