The Scottish Conservative leader indicated the UK Government should not block proposals for a pilot scheme. 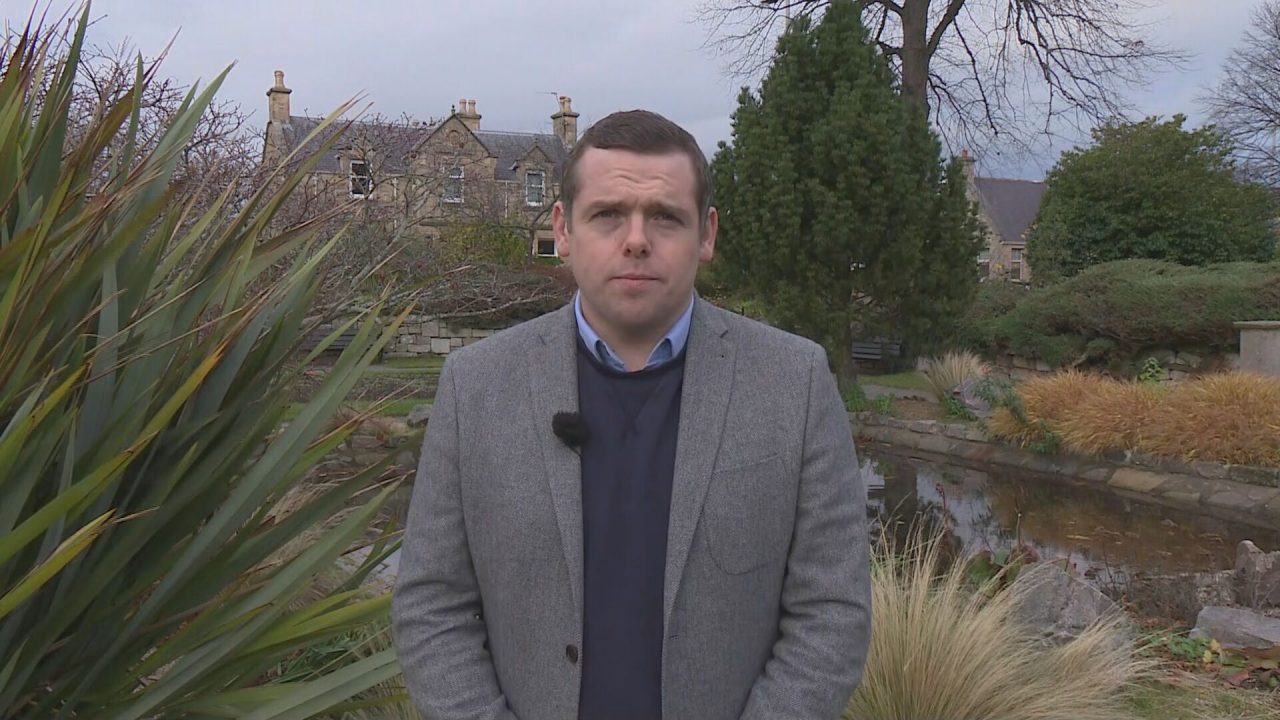 By Lewis McKenzie and Ewan Petrie

Douglas Ross has said he will not stand in the way of a pilot scheme on drug consumption rooms.

The Scottish Conservative leader pledged that his party will not oppose such a proposal if brought forward by the Scottish Government.

And he insisted that the UK Government should not block the move.

Scottish Secretary Alister Jack has previously stated that there are no plans to introduce drug consumption rooms as current evidence does not support their use.

Speaking to STV News ,Ross, who said he still has “serious reservations” about drug consumption rooms, pledged to keep an open mind on how the issue of drug deaths in Scotland can be addressed.

“But we continue to face the highest drug deaths anywhere in Europe here in Scotland.

“And I’ve listened to charities like Favor UK and others, and I think we’ve got to look at every option to stop people dying in Scotland as a result of drug misuse.

“We know from the most recent figures almost four people every single day in Scotland are dying from drugs.

“And that’s why I’m saying we have to look at every option.”

Ross also highlighted the need for better rehabilitation facilities and treatment to be made available.

“But, I’m not going to stand in the way of getting further evidence.

“So, I’m not going to oppose a pilot, if that’s what the Scottish Government are going to bring forward.

“But crucially, even those who ardently support these consumption rooms also say they can’t be on their own.

“We need far better rehab facilities and treatment available, which is why it has to go hand-in-hand with my own members’ Bill that I’m taking forward in the Scottish Parliament, a Right to Recovery Bill, to enshrine in law that everyone who wants support can get it.”

Asked what has changed in his stance on the issue, the Scottish Conservative leader said that “we cannot ignore” any option.

“I’ve said throughout I would always keep an open mind,” Ross explained.

“I want to look at all the evidence and at the moment we don’t have evidence here in Scotland.

“So we’ve clearly seen from the chief constable of Police Scotland very recently that he like I have very serious reservations about the use of drug consumption rooms.

“But we cannot ignore any option at the moment as more and more people continue to die and as Scotland continues to have the highest drug death rate, not just in the United Kingdom, but anywhere in Europe.”

Ross said that there are compromises that all parties have to look at due to the high number of drug deaths.

He told STV News: “I’m not going to oppose a pilot if that’s what the Scottish Government bring forward and I don’t think the UK Government should either.

“This is a pilot, if this is what the Scottish Government are talking about now, if they bring that forward, if they take it into Parliament, we will scrutinise that very closely.

“But we will not stand in the way of having a pilot to look to see what the evidence shows.”

He added: “I’m coming to this with an open mind, I think we all have to.

“There are compromises that all parties have to look at at the moment because we cannot continue to have more and more Scottish people dying as a result of drug misuse and their families being left to mourn as this problem just gets worse and worse.”

A UK Government spokesperson said: “This Government keeps drug control under constant review and we work in consultation with the Advisory Council on the Misuse of Drugs (ACMD) to consider any new evidence of misuse, harms and diversion.

“Our approach on drugs remains clear – we must prevent drug use in our communities, support people through treatment and recovery, and tackle the supply of illegal drugs.”

“I welcome this change in position from Douglas Ross, as we know from the evidence that safer drug consumption facilities can help save lives in Scotland,” she said.

“I hope the UK Government will work with us to allow these facilities to be introduced as quickly as possible.

“I note that Mr Ross states his view that the UK Government should not stand in the way of safe consumption rooms being piloted and I hope he will now join me in pressing them to allow us to move ahead with their introduction without hindrance.

“Meanwhile, the Lord Advocate has recently indicated a willingness to look at a fresh proposal for a safer drug consumption facility and we are actively exploring how we can overcome the existing legal barriers to allow us to progress this.

“We have been clear that these facilities are not a magic bullet, and alone will not be the answer to our tragically high numbers of drug deaths. That’s why we continue to invest in the improvement of service and increasing the rehabilitation bed capacity in Scotland.”