PM 'should be facing a straight red in your book', Douglas Ross told

The Scottish Conservatives leader was questioned during an appearance on Scotland Tonight on Tuesday. 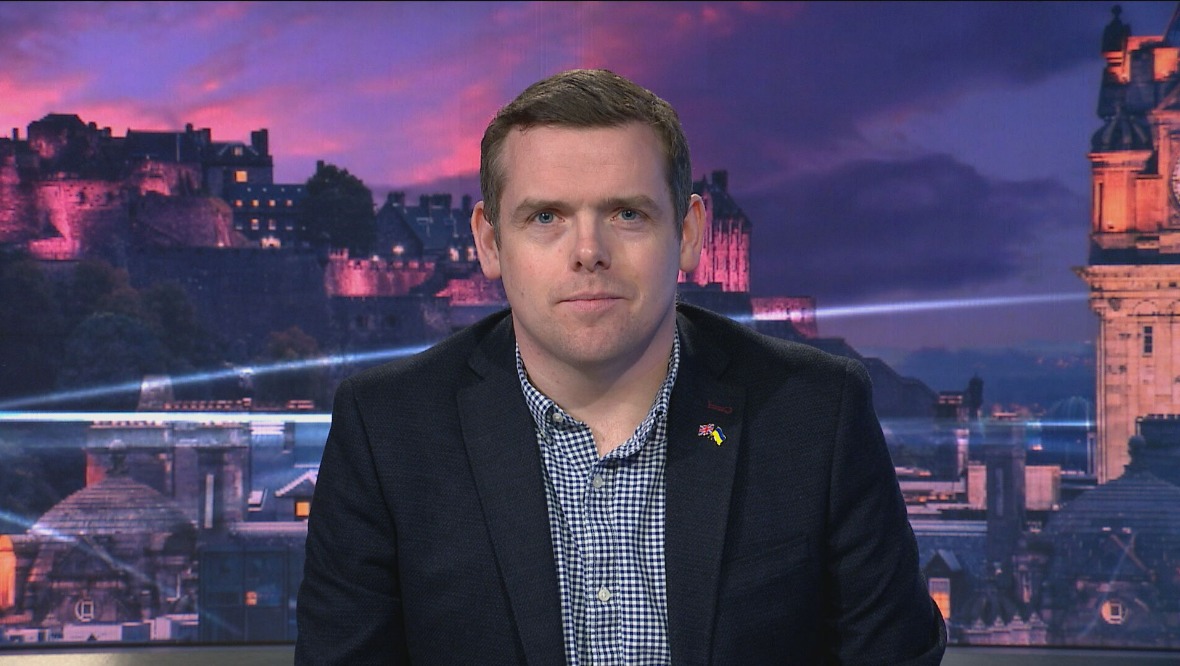 Douglas Ross once said that “lying to parliament and breaking the ministerial code is a straight red”.

The Scottish Conservatives leader has now been challenged on why he called for Nicola Sturgeon to resign last year amid the Alex Salmond inquiry, but now seems to have backtracked on his view following the Prime Minister’s fine for attending a lockdown-busting party.

During the Salmond inquiry saga last year, Ross tweeted: “Lying to parliament and breaking the ministerial code is a straight red, even in the most lenient referee’s book.”

The First Minister was found by a cross-party panel of MSPs to have ‘misled Holyrood’ over her handling of sexual harassment complaints against her predecessor.

However, an independent inquiry cleared her of breaching the ministerial code.

During an appearance on Scotland Tonight on Tuesday, STV News’ political editor Colin Mackay challenged Ross as to why he’s not calling for Boris Johnson and Rishi Sunak’s resignation as he did with Sturgeon.

Mackay stated: “And what you said in March 2021 was that ‘lying to parliament and breaking the ministerial code is a straight red’.

“You said that about Nicola Sturgeon. Why is it the situation for her, but not for the chancellor or Prime Minister?”

Ross highlighted that the FM was found guilty by the cross-party committee of having ‘misled parliament’, adding: “And Nicola Sturgeon remains a member of the Scottish Parliament and First Minister.”

Mackay stated that both the PM and chancellor have now been accused of misleading Parliament.

He stated: “They should face a straight red in your book surely.”

“I’m not saying anyone should just accept this and move on.”

Mackay asked Ross, a football referee, if he needs “VAR for a rerun of this?”

Ross again replied that Johnson and Sunak should face questions over their Covid breach.

Johnson, his wife Carrie, and Sunak were handed fixed penalty notices on Tuesday for attending a birthday party in breach of coronavirus rules in June 2020.

The fines have since been paid with both the PM and chancellor stressing they will continue in their jobs despite mounting pressure for them to quit.

Ross – who previously called for Johnson to quit – instead believes the PM should stay in his post, claiming the situation in Ukraine required a stable Government in the UK.

Speaking on Scotland Tonight, Ross stated: “I absolutely understand and share the anger and fury that people have right now.

“It’s the same anger and fury they had when these stories started to come out at the tail end of last year and earlier on this year.”

When challenged on whether he thought the pair misled Parliament, Ross stated: “Well, that’s up to the Prime Minister, to the Chancellor of the Exchequer to explain what they’ve said in Parliament.

“But that’s for them to do. I’m only responsible for what I say in Parliament and what I say and do.

“It’s up to others to defend or otherwise what they have said or done.”