The former transport minister gave evidence to MSPs about the ferries contract awarded to Ferguson Marine. 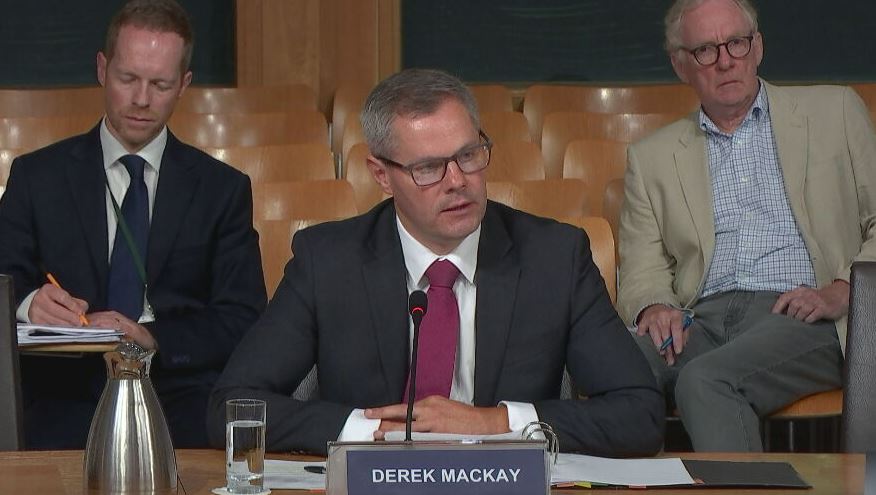 Derek Mackay has said he will “take his share” of responsibility in awarding an ultimately disastrous contract to build two ferries to Ferguson Marine.

Mackay was transport minister at the time of the decision to award the contract to the firm.

Giving evidence to the Scottish Parliament’s Public Audit Committee on Thursday, he described it as a “catastrophic failure” by Ferguson’s in being unable to complete the vessels on time and on budget.

It marked the first time that Mackay has appeared at Holyrood since resigning ahead of the budget in 2020.

Scottish Conservative MSP Craig Hoy asked Mackay whether he believes he is being “lined up to be the fall guy” over the ferries fiasco.

“But equally, I recognise the catastrophic failure at Ferguson’s to complete the vessels on time and on budget, that is deeply regrettable.

“But what I don’t regret is protecting the workforce and ensuring that the yard was supported, it has a future and that we were able to support Scottish shipbuilding

“So, I can answer for my decisions and my involvement. I was a proactive minister and I did carefully consider all the submissions and happy to explain through the rationale of every single one, whilst also taking my share of responsibility.”

Mackay was asked who else has a share in that responsibility.

“Well, according to the Auditor General and the previous REC Committee in the previous parliament, there are multiple failings,” he said.

“So I don’t think it all rests on me, but other people have advised that clearly there are multiple failings here.

“But I’m taking my share of responsibility, I was the lead minister.”

The former transport minister also denied suggestions that the decision to award the contract to FMEL (Ferguson Marine Engineering Limited) was linked to “political calculations”, or that it was “dictated by a political timescale”.

It has previously been suggested that the decision to award the contract was rushed ahead of the SNP conference in October 2015.

“In my opinion, absolutely not”, said Mackay.

“It was a methodical approach to procurement and I’ve recognised the failure of it, but it was made with the best of intentions, processes were followed and no, I don’t think it was rushed.

“And I don’t think it was a partisan decision, it was a decision about trying to ensure we could get two vessels complete, as it happens built in Scotland, in ensuring the future of the yard and growing the workforce at the yard.”