First Minister Nicola Sturgeon made the announcement in a statement to the Scottish Parliament on Wednesday. 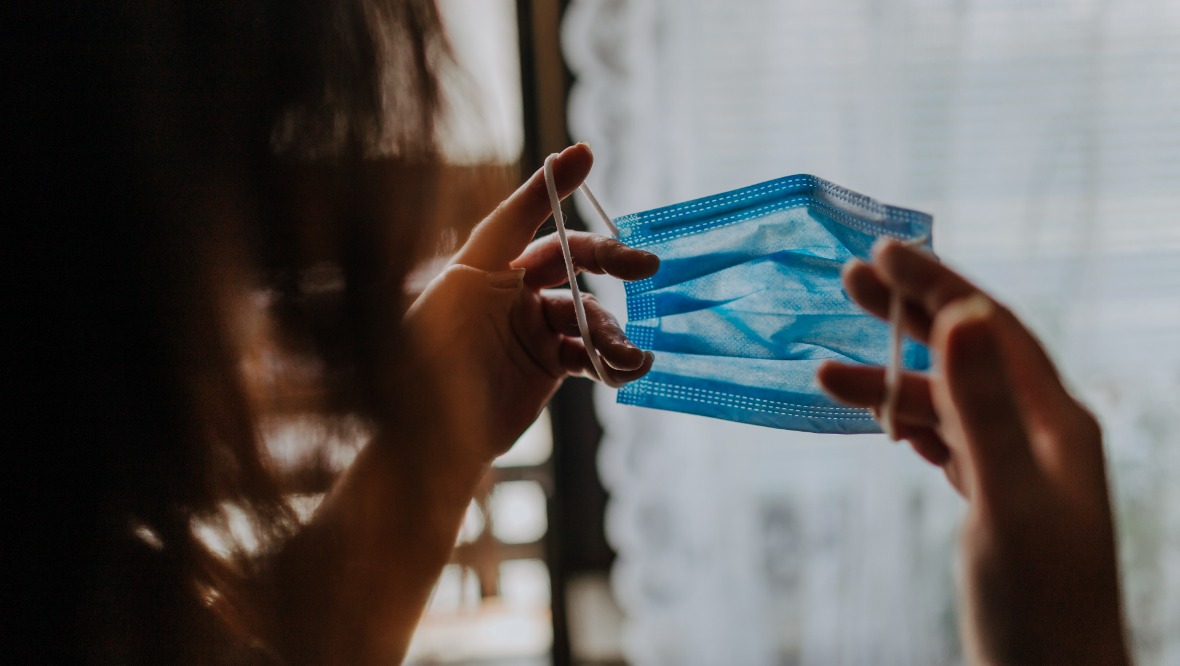 Face coverings will still be required on public transport, in shops and in certain other indoor settings beyond April 4, Nicola Sturgeon has announced.

In a statement to the Scottish Parliament on Wednesday, the First Minister said the regulations would remain in place until Easter Monday on April 18.

However, from this Monday it will no longer be a legal requirement to wear a face covering in places of worship or while attending a marriage ceremony, a civil partnership registration, or a funeral service or commemorative event.

It comes as transmission of the virus recently hit record levels in Scotland, with the Office for National Statistics reporting one in 11 people north of the border had Covid in the week ending March 20.

Sturgeon said the decision to phase the easing of the face mask rule was due to the “very high level of infection and the pressure on the NHS”.

The FM said: “I recognise that face coverings are an inconvenience.

“However, given all the sacrifice of the past two years, and in view of the current pressure on the NHS, I believe the vast majority of people will accept that for a further two weeks this is a proportionate precautionary measure while we pass the peak of this latest wave.

“It also provides some further protection to those who are most at risk from the virus.”

All of Scotland’s other Covid-19 rules have been converted into guidance.

The rule on face coverings was due to follow suit but was initially delayed due to a spike in new cases.

The number of people in hospital with the virus recently hit record highs.

On Monday, 2383 people were being treated in hospital for a recently confirmed case of Covid-19. This fell to 2344 on Tuesday.

A further 9610 new cases of Covid were also reported overnight, alongside a further 34 deaths.

Despite the high numbers, Sturgeon said wastewater sampling had shown the situation may be stabilising.

She added: “Two weeks ago, there were on average just over 12,400 new cases being reported each day. One week ago, the average case number was still high, at around 12,000 a day.

“However, over the past week, it has fallen to 10,200 a day. That is a 15% fall over the last seven days, and it is fairly consistent across all age groups.

“That gives us grounds for optimism that this latest wave of infection may now have peaked. Of course, the daily numbers on their own need to be treated with a degree of caution.”

Earlier on Wednesday, deputy first minister John Swinney and justice secretary Keith Brown announced that they had both tested positive for Covid after avoiding the virus for two years.

Swinney, who is also the Scottish Government’s Covid recovery secretary, said he would be “self-isolating in accordance with the rules”, with Brown urging him to “be safe” and “hopefully you’ll be better soon”.

While the Scottish cabinet had met as normal on Tuesday, it was confirmed that the meeting had taken place virtually.

‘This isn’t just an inconvenience, it’s really holding some people back.’

In response to the FM’s statement, Douglas Ross, leader of the Scottish Conservatives, said: “We believe that anyone who wants to keep wearing a face mask should keep doing so – particularly if it will protect vulnerable friends and relatives – but it should be down to individual choice.

“We should leave it up to people and businesses to decide what’s best for them, based on public health advice. Nicola Sturgeon has to start trusting the Scottish public more.

“Covid case rates in Scotland are now far higher than the rest of the UK, so the First Minister’s strategy is clearly failing.

“And because of her failing strategy, she is keeping restrictions in place in Scotland weeks after they have been removed elsewhere.

“This isn’t just an inconvenience, it’s really holding some people back.

“This is now the third date we’ve heard that face mask use will no longer be mandated by law – yet the First Minister still wouldn’t guarantee that there will be no further extensions.

“We can’t go on like this. We must learn to live with Covid like other countries in the UK and across Europe.”

Jackie Baillie, deputy leader of Scottish Labour, said while the government’s “cautious approach” to face masks is understandable, “many Scots will be wondering why other parts of the UK which have looser rules on masks are experiencing a lower rate of Covid infection”.

She added: “Whilst life is returning to near normality for many that is not the case for those who are immunocompromised and the 180,000 people who were on the shielding list.

“But there is no detailed plan for testing the immunocompromised and their families and carers, or for making antivirals more accessible for them.

“It’s all too clear that this government has no idea about how to tackle the spread of Covid in schools.

“Pupil and staff absence is already high and removing asymptomatic testing will mean that pupils will not know if they have to stay away from school due to a cold or Covid. This will cause disruption to their education at a time when the exams are starting.

“Given that very little has been done to improve ventilation in classrooms the First Minister must reconsider ending asymptomatic testing in schools for at least the next two months to protect exams.

“While we should have learned the lessons of this pandemic, too many people are still being left behind.

“I have 80-year-old constituents from Helensburgh travelling to Dunoon, a 100-mile round trip, on two ferries to get their booster. This is unacceptable. Apologies from the First Minister are welcome, but hollow without action. The First Minister must act to ensure local accessibility for vaccination now.”