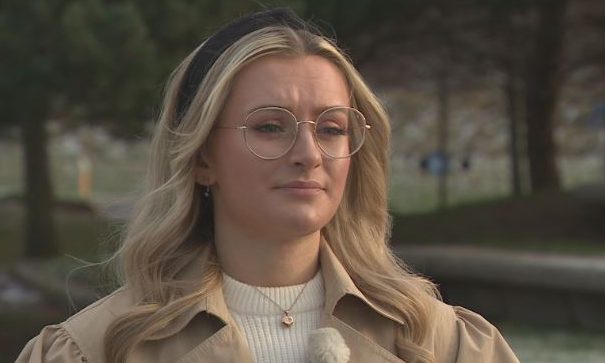 Campaigners are calling for sexual harassment in public spaces to be made illegal in Scotland.

The inspiration came after a man whispered sexually inappropriate remarks to activist Sally Donald at a bus stop in Inverness.

“Women know these instances so well,” Sally told STV News. “It’s just that feeling where you want to cry.

“You feel so humiliated, but at the same time you think ‘did that happen?’. You start second guessing yourself.

“He was saying really revolting things about how I look and what he wants to do to me.”

Alice said: “So many women have so many stories, a whole backlog of stories of their experiences of being publicly sexually harassed.

“What we want to see the legislation look like is an education-based approach. We are not looking for incarceration or for penal methods to remedy or moderate this behaviour.”

Both women are petitioning the Scottish Government to update the Sexual Offences (Scotland) Act 2009.

A total of 97% of women aged 18-24 reported experiences of sexual harassment, according to a UN Women report in 2021.

Women also reported feeling constantly scared, powerless and humiliated by the experience of being harassed in public spaces.

The campaign follows the findings of a report by the criminal justice and misogyny working group, headed by Baroness Helena Kennedy, on International Women’s Day last year, which recommended that public harassment be made a criminal offence.

Paul McLennan, MSP for East Lothian, supports the campaign and wants to see action taken in the Scottish Parliament.

The SNP MSP said: “I think there’s an onus on all politicians and parliamentarians to make sure that the recommendations are carried forward.”

There are currently no specific legal consequences for those who sexually harass others in public spaces across Scotland.

In countries such as Belgium, France and Portugal, public sexual harassment is already an offence which perpetrators can be prosecuted for.

Other measures outlined by the report included making misogyny a statutory aggravation which would operate outside of the Hate Crime and Public Order (Scotland) Act 2021.

A Scottish Government spokesperson said: “The programme for government confirmed that we will consult no later than the summer on specific draft laws to tackle misogynistic criminal behaviours, with a view to introducing a bill later in this parliament.”