Johnson: Those who want to break up the UK 'will never, ever succeed'

Johnson compares himself to a booster rocket and a Roman statesman as he defends the strength of the union. 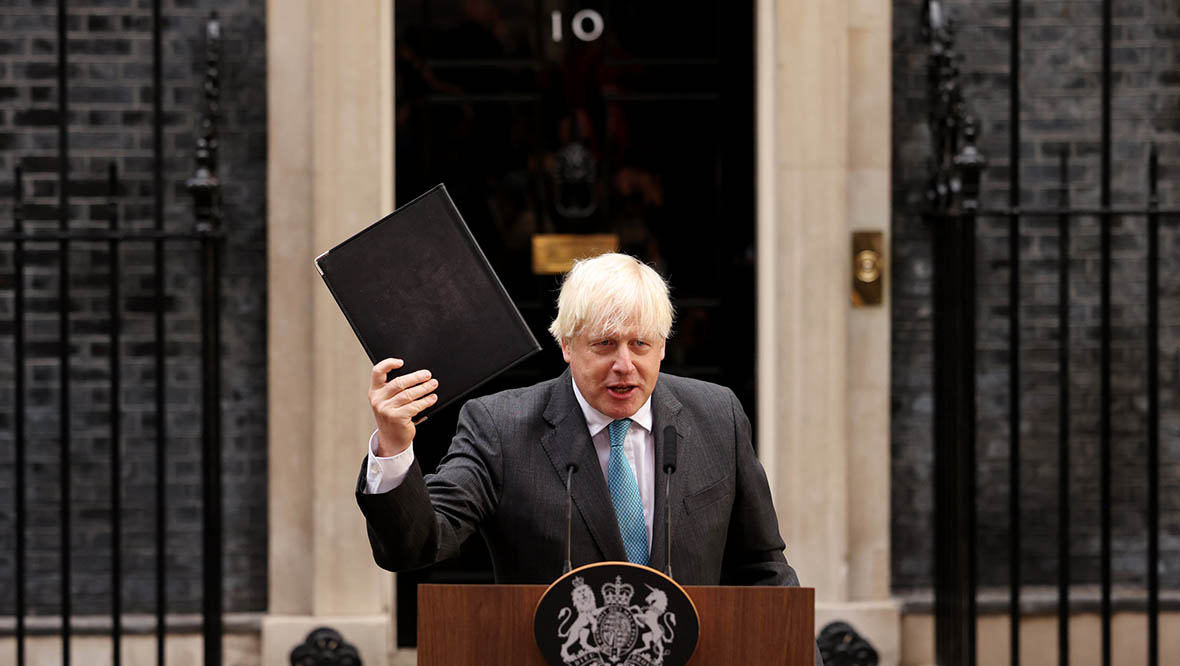 Boris Johnson said the UK is “so strong” that people wishing to break it up “will never, ever succeed” as he delivered his farewell speech as Prime Minister.

Speaking from a lectern at Downing Street in front of assembled Tory MPs and officials, Johnson praised the diplomatic and security services and sent a message to those who want to see the dissolution of the union.

He said: “Speaking with clarity and authority, from Ukraine to the Aukus pact with America and Australia, because we are one whole and entire United Kingdom, whose diplomat security services and armed forces are so globally admired.

“And by the way … as I leave, I believe our union is so strong that those who want to break it up, they’ll keep trying, but they will never, ever succeed.”

During his speech, Johnson compared himself to a “booster rocket” jetting off into distant lands.

He said: “I am now like one of those booster rockets that has fulfilled its function and I will now be gently re-entering the atmosphere and splashing down invisibly in some remote and obscure corner of the Pacific.”

Johnson then promised “the most fervent support” to his successor Liz Truss as he compared himself to Cincinnatus, a Roman statesman who battled against invasion before returning to his farm.

The outgoing PM cited the success of the Covid vaccine rollout as one of the standout achievements of his premiership.

He also emphasised the early delivery of weapons to Ukraine, as well as the economic support offered to the British public.

He said: “Looking at what is happening in this country, the changes that are taking place, that is why private sector investment is flooding in – more private sector, more venture capital investment than China itself.

“More billion-pound tech companies sprouting here in the UK than in France, Germany and Israel combined.

“And, as a result, unemployment as I leave office – unemployment down to lows not seen since I was about 10 years old and bouncing around on a space hopper.”

Regarding splits in the Conservative Party, Johnson said if his dog Dilyn and Larry the cat can “put behind them their occasional difficulties”, then so can the Tories.

He said: “Thank you to everybody behind me in this building. Thank you to all of you in Government. Thank you everybody who’s helped look after me and my family over the last three years, including Dilyn the dog.

“I just say to my party if Dilyn and Larry can put behind them their occasional difficulties, then so can the Conservative Party.

“Above all, thanks to you, to the British people, to the voters, for giving me the chance to serve, all of you who worked so tirelessly together to beat Covid, to put us where we are today.

“Together, we have laid foundations that will stand the test of time, whether by taking back control of our laws or putting in vital new infrastructure, great solid masonry on which we will continue to build together, paving the path of prosperity now and for future generations.

“I will be supporting Liz Truss and the new government every step of the way.”