PM offers 'wholehearted apology' after being fined over lockdown party

Boris Johnson says he acknowledges 'the hurt and the anger' caused by his attendance at a gathering during lockdown. 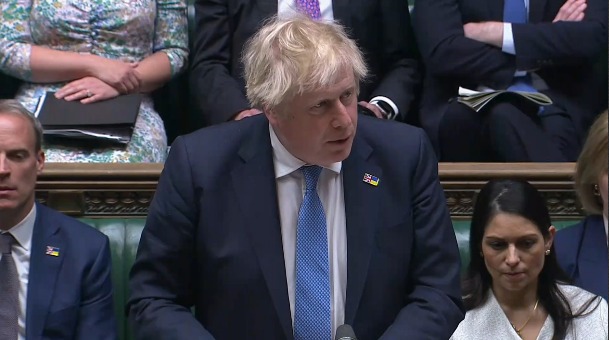 Boris Johnson has offered a “wholehearted apology” to the House of Commons after being fined over his attendance at a gathering during the first coronavirus lockdown.

Addressing the House as it returned from its Easter recess, the Prime Minister apologised dozens of times for the “mistake” that saw him fined by police over the event in No 10 for his birthday in June 2020.

But he insisted that he did not intentionally mislead Parliament with his earlier denials of rule-breaking parties, after MPs were granted a vote later this week on his alleged lying.

Johnson said: “Let me begin in all humility by saying that on the 12th of April I received a fixed penalty notice relating to an event in Downing Street on the 19th of June, 2020.

“I paid the fine immediately and I offered the British people a full apology and I take this opportunity on the first available sitting day to repeat my wholehearted apology to the House.”

“I paid the fine immediately and I offered the British people a full apology and I take this opportunity on the first available sitting day to repeat my wholehearted apology to the House.

“As soon as I received the notice, I acknowledged the hurt and the anger and I said that people had a right to expect better of their Prime Minister, and I repeat that Mr Speaker again in the House now.

“Let me also say, not by way of mitigation or excuse, but purely because it explains my previous words in this House, that it did not occur to me then or subsequently that a gathering in the Cabinet room just before a vital meeting on Covid strategy could amount to a breach of the rules.

“I repeat, that was my mistake and I apologise for it unreservedly. I respect the outcome of the police investigation, which is still under way and I can only say that I will respect their decision-making and always take the appropriate steps and as the House will know I’ve already taken significant steps to change the way things work in Number 10

“And it is precisely because I know that so many people are angry and disappointed that I feel an even greater sense of obligation to deliver on the priorities.”

On December 1, the Prime Minister, addressing press reports about an alleged No 10 Christmas party in 2020, assured MPs that “all guidance was followed completely” in Downing Street.

Johnson has since been fined for the gathering on his 56th birthday, in which he was said to have been “ambushed” with a cake and up to 30 people attended, with the police investigation into other alleged breaches continuing.

The Conservative Party leader is alleged to have been at six of the 12 events being looked into by officers.

The Prime Minister, along with his wife, Carrie Johnson, and Chancellor Rishi Sunak, were last week issued with fixed-penalty notices by police investigating claims of coronavirus lockdown breaches in No 10.

Mark Harper, the Tory MP for the Forest of Dean, told Johnson in the Commons that he does not believe the Prime Minister is “worthy of the great office that he holds”.

Harper revealed he had submitted a letter to the 1922 Committee of backbench Conservatives calling for a no confidence vote after branding Johnson’s actions “indefensible”.

A no-confidence vote in the Prime Minister is triggered if 1922 chair Sir Graham Brady has 54 letters from Tory MPs. The number submitted is a closely-guarded secret.

Meanwhile, SNP Westminster leader Ian Blackford said the Prime Minister only apologised because he was caught, describing him as a “serial offender” and again calling for him to resign.

“After months of denials, his excuses have finally run out of road, and so must his time of office.”

“The rules of this House prevent me from saying that the Prime Minister deliberately and wilfully misled this House. But maybe today that matters little, because the public have already made up their minds,” Blackford said, pointing to polling, saying “the public knows the difference between the truth and lying”.

He added: “And they know that the Prime Minister is only apologising for one reason and one reason only, it’s the only reason he ever apologises, because he’s been caught. After months of denials, his excuses have finally run out of road, and so must his time in office.