Boris Johnson labelled a ‘man without shame’ over No 10 gathering

The Prime Minister apologised to people across the country. 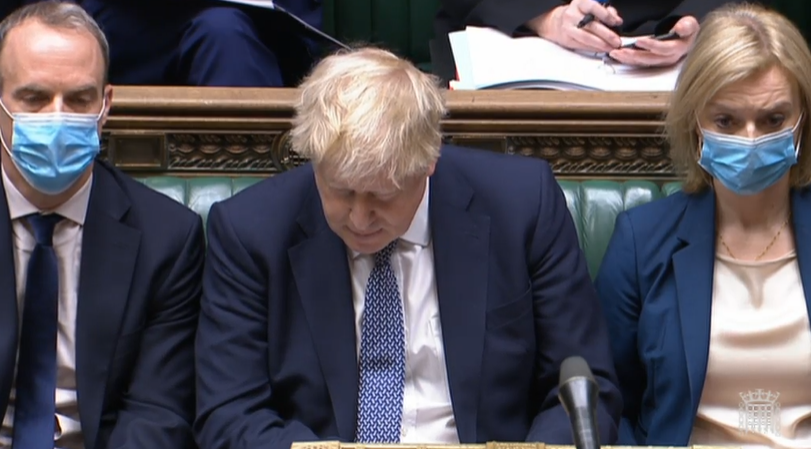 Boris Johnson has been accused of being a “man without shame”, after he apologised for attending a gathering in the Downing Street garden which broke Covid rules.

The Prime Minister was grilled by MPs on Wednesday after it emerged that around 100 staff from No 10 were invited to a drinks party in May 2020.

It came at a time when people across the country were banned from meeting more than one other person outdoors.

Ahead of PMQs, Johnson made a statement apologising over the gathering, but said he “cannot anticipate” the findings of the inquiry being led by Sue Gray.

He told MPs: “I want to apologise. I know that millions of people across this country have made extraordinary sacrifices over the last 18 months.

“I know the anguish they have been through – unable to mourn their relatives, unable to live their lives as they want or to do the things they love.

“And I know the rage they feel with me and with the Government I lead when they think in Downing Street itself the rules are not being properly followed by the people who make the rules.

“And though I cannot anticipate the conclusions of the current inquiry, I have learned enough to know there were things we simply did not get right and I must take responsibility.”

The Prime Minister admitted he went into the garden on May 20, but claimed he believed that it was a “work event”.

He said: “No 10 is a big department with a garden as an extension of the office which has been in constant use because of the role of fresh air in stopping the virus.

“When I went into that garden just after six on May 20, 2020, to thank groups of staff before going back into my office 25 minutes later to continue working, I believed implicitly that this was a work event.”

“I should have recognised that even if it could be said technically to fall within the guidance, there are millions and millions of people who simply would not see it that way, people who have suffered terribly, people who were forbidden for meeting loved ones at all inside or outside, and to them and to this House I offer my heartfelt apologies.

“All I ask is that Sue Gray be allowed to complete her inquiry into that day and several others so that the full facts can be established.”

Challenging the Prime Minister on the issue, Labour leader Sir Keir Starmer called on Johnson to “do the decent thing and resign”.

“After months of deceit and deception, the pathetic spectacle of a man who’s run out of road,” said Starmer.

“His defence that he ‘didn’t realise he was at a party’ is so ridiculous that it’s actually offensive to the British public.

“He’s finally been forced to admit what everyone knew – that when the whole country was locked down, he was hosting boozy parties in Downing Street.

“Is he now going to do the decent thing and resign?”

Johnson responded: “I appreciate the point that he’s making about the event that I attended.

“I want to repeat that I thought it was a work event and I regret very much that we did not do things differently that evening, as I’ve said, and I take responsibility and I apologise.”

The Labour leader added: “This just isn’t working, Prime Minister. Everyone can see what happened.

“It started with reports of boozy parties in Downing Street during lockdown. The Prime Minister pretended that he had been assured there were no parties, how that fits with his defence now I do not know.

“Then the video landed, blowing the Prime Minister’s first defence out of the water, so then he pretended … he was sickened and furious about the parties, now it turns out he was at the parties all along.

“Can’t the Prime Minister see why the British public think he’s lying through his teeth?”

“The Prime Minister stands before us accused of betraying the nation’s trust,” Blackford told the Commons.

“Of treating the public with contempt, of breaking the laws set by his own government.”

He continued: “The public overwhelmingly think that the Prime Minister should resign.

“Trust has been lost and the public will not forgive or forget. If the Prime Minister has no sense of shame, then the Tory backbenchers must act to remove him.”