The Prime Minister spoke out at the start of his two-day visit to Scotland on Wednesday. 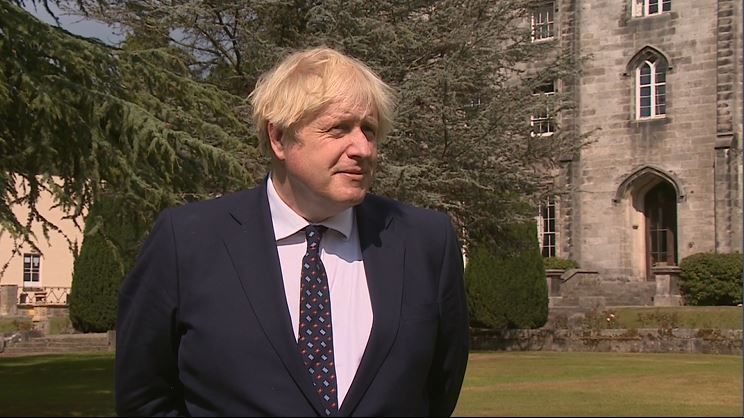 Boris Johnson has denied snubbing Nicola Sturgeon during his visit to Scotland.

The First Minister had written to the Prime Minister inviting him to her Bute House residence in Edinburgh.

However, Johnson declined the invitation, with Sturgeon later describing it as a “missed opportunity”.

The Prime Minister also praised people in Scotland for the high rate of Covid vaccination in the country.

“We work together, the government of the UK, the Scottish Government, at all levels, work together on the things that matter to the people of our country,” Johnson told STV News when asked about the invite.

“Particularly, rolling out vaccinations and generally, making sure that we bounce back and build back better from the pandemic and we’re going to continue to do that”.

‘Really fantastic achievement by the people of Scotland coming forward to get vaccinated.’

He continued: “I’m looking forward to continuing to work with the Scottish Government, and will do so getting ready for COP26.

“But above all, completing our rollout of the vaccines, which has been a pan-UK effort, a fantastic effort by our National Health Service, by the armed services, by the volunteers, a wonderful tribute to the efforts of the whole country.

“And I thank the Scottish Government for what they’ve been doing. A really high rate of vaccination here in Scotland, really fantastic achievement by the people of Scotland coming forward to get vaccinated.

“Working with them to finish that, but also making sure that we have a very strong economic recovery and I think the country is well placed to do that.”

The Prime Minister was speaking in Scotland after it was announced that coronavirus vaccines will be offered to those aged 16 and 17, following advice from the Joint Committee on Vaccination and Immunisation (JCVI).

Asked if the vaccination programme could be extended to those under the age of 16, Johnsons said politicians should take their lead from the JCVI.

He said: “I think it’s very important that everybody in politics listens first to the clinicians and the medical experts.

“And I would just urge all families thinking about this across the country to listen to the JCVI… they are extremely expert, they’re amongst the best, if not the best, in the world.

“They know what’s safe and I think we should listen to them and take our lead from them.”