Johnson made a statement outside No 10. 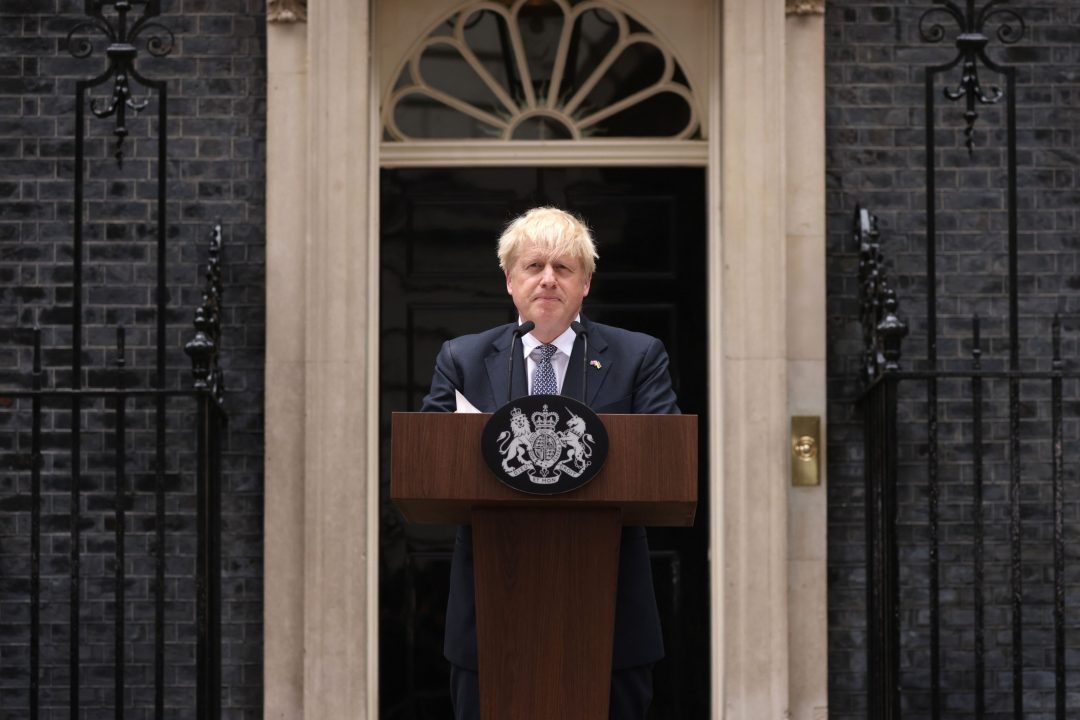 Boris Johnson has announced his resignation as Prime Minister.

In a statement in Downing Street, he thanked members of the public who voted for the Conservatives in 2019.

But, he acknowledged that the will of the parliamentary Conservative Party is “that there should be a new leader”.

He confirmed that he will continue until a new leader is elected, with the timetable for choosing a new PM to be announced next week

Johnson said he was “immensely proud of the achievements of this Government”, from getting Brexit done to getting the UK through the pandemic, and leading the West in standing up to Putin’s aggression in Ukraine.

Addressing the British public, he said: “I want you to know how sad I am to be giving up the best job in the world, but them’s the breaks.”

He stated that “in politics, no one is remotely indispensable”, as he admitted he had tried to persuade his Cabinet it would have been “eccentric” to change Prime Minister now.

“In the last few days, I tried to persuade my colleagues that it would be eccentric to change governments when we’re delivering so much and when we have such a vast mandate and when we’re actually only a handful of points behind in the polls, even in midterm after quite a few months of pretty relentless sledging and when the economic scene is so difficult domestically and internationally,” he said.

“I regret not to have been successful in those arguments and of course it’s painful not to be able to see through so many ideas and projects myself.

“But as we’ve seen, at Westminster the herd instinct is powerful, when the herd moves, it moves.

“And my friends in politics, no one is remotely indispensable and our brilliant and Darwinian system will produce another leader, equally committed to taking this country forward through tough times.”

Addressing the people of Ukraine, Johnson said “we in the UK will continue to back your fight for freedom for as long as it takes”.

He stated: “Let me say now to the people of Ukraine, that I know that we in the UK will continue to back your fight for freedom for as long as it takes.

“And, at the same time, in this country we’ve been pushing forward a vast programme of investment in infrastructure and skills and technology, the biggest in a century.

“Because if I have one insight into human beings, it is that genius and talent and enthusiasm and imagination are evenly distributed throughout the population, but opportunity is not, and that’s why we must keep levelling up, keep unleashing the potential of every part of the United Kingdom.

“If we can do that in this country, we will be the most prosperous in Europe.”

Johnson thanked his wife, Carrie, his family and the civil service in his speech.

“I want to thank Carrie and our children, and all the members of our family who have had to put up with so much for so long,” he said.

He also thanked the “peerless British civil service” and the “fantastic NHS” who “helped to extend my own period in office”.

Johnson said it had been an “immense privilege” to serve as Prime Minister and thanked the British public as he concluded his speech.

He said: “Above all, I want to thank you, the British public, for the immense privilege that you have given me and I want you to know that from now on until the new prime minister is in place, your interests will be served and the Government of the country will carry on.

“Being Prime Minister is an education in itself. I have travelled to every part of the United Kingdom and in addition to the beauty of our natural world I have found so many people possessed of such boundless British originality and so willing to tackle old problems in news ways that I know that even if things seem dark now, our future together is golden.

“Thank you all very much. Thank you.”

Following the statement, Scottish secretary Alister Jack described Johnson as a “good friend” as he wished him well for the future.

“I am sad to see Boris Johnson stand down as Prime Minister,” said Jack.

“He has achieved a huge amount in office, including delivering Brexit, supporting the country through Covid, and leading the international response to Russia’s invasion of Ukraine. Most importantly, he has worked tirelessly to strengthen the Union.

“Boris is a good friend, as well as the leader of my party, and I wish him well for the future.

“I know that the next leader of the Conservative Party will build on Boris Johnson’s many achievements. I look forward to the party electing a leader who will unite us, and get on with the business of delivering for people throughout the United Kingdom.”