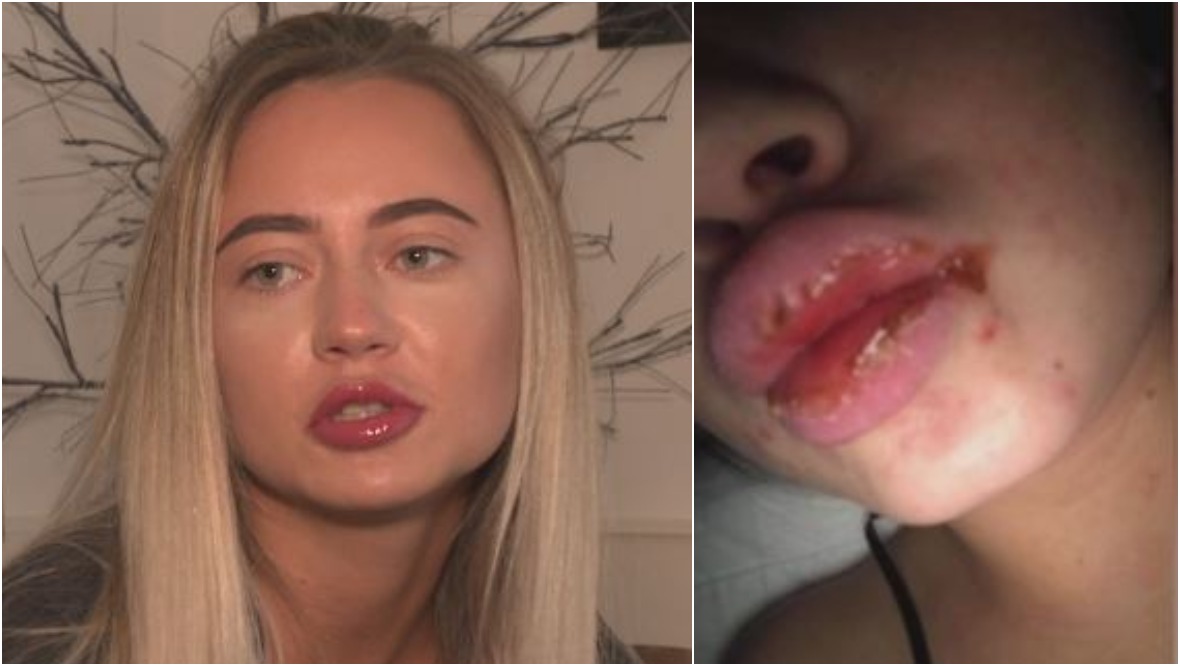 The Scottish Government is planning to bring in a licensing system for beauticians offering cosmetic injections such as lip or cheek fillers.

Such procedures are currently not regulated and can be carried out by anyone.

In a consultation document, the government said there is a “growing risk” as the number of unregulated premises – including beauty salons, aesthetic clinics, hairdressers and pharmacies – offering the treatments is increasing.

The paper highlights the potential for the procedures to go wrong and the possibility that permanent damage can be caused.

She had underwent lip enhancement before but when she went for what she thought was a routine appointment, things didn’t go to plan.

Niamh explained: “The next morning I woke up and, obviously I’d had them done before, so they were like abnormally brick solid when I was touching them.

“Within the week they started having burns on my lips and then within two weeks I was waking up and my lips were literally stuck to my bedroom pillow.

“I was having to clean the wounds out with salt water and everything, and then I ended up going to the doctors and they gave me antibiotics for them, and said that I would’ve ended up with sepsis if I left it any longer.”

Dr Simon Ravichandran runs an aesthetic medical clinic in Glasgow and regularly meets people who have had treatments elsewhere – often from practitioners who don’t have a medical background – that have not had the desired outcome.

He said: “It’s a regular occurrence, about once a week or so, at least, I would say.

“We generally see someone who has been to another practitioner, who is possibly not of a medical background.

‘The treatments have been done with good faith but they haven’t ended up the way they wanted to be.’

“They’ve had treatments. The treatments have been done with good faith but they haven’t ended up the way they wanted to be.

“We see issues like lumps, bumps, irregularities, cosmetic outcomes that are less than desirable. Sometimes we see even more serious things like infections and other things that can happen.”

Ministers plan to bring in legislation to introduce a licensing scheme for people who are not healthcare professionals and carry out non-surgical treatments which penetrate the skin.

They have stopped short of a ban, despite the Scottish Cosmetic Interventions Expert Group effectively calling for such a move by saying the procedures should only be provided “on or behalf of a regulated healthcare professional”.

The consultation document states: “We consider that a blanket ban on non-medical professionals carrying out non-surgical cosmetic procedures could be difficult to enforce and might drive unregulated providers underground.”

In 2016, the law was changed to ensure independent clinics run by a doctor, dentist, nurse, midwife or dental technician had to register with Healthcare Improvement Scotland before they could legally provide cosmetic procedures

The Scottish Government wants pharmacies to be included in this group as part of the proposed legislative changes.

Public health minister Joe FitzPatrick said: “We are committed to patient safety and want to ensure that all those who carry out non-surgical procedures, such as dermal fillers or lip enhancements, are competent and that the treatments take place in safe and hygienic premises.

“We plan to introduce regulations later this year and invite members of the public and interested parties to give their views as part of the consultation on our proposals.

“In the meantime, we urge anyone considering any kind of cosmetic surgery to visit the Health Improvement Scotland website for regulated and approved providers.”

The consultation opened on Friday and runs until the end of April.