Eight million households to be given £650 cost-of-living payment 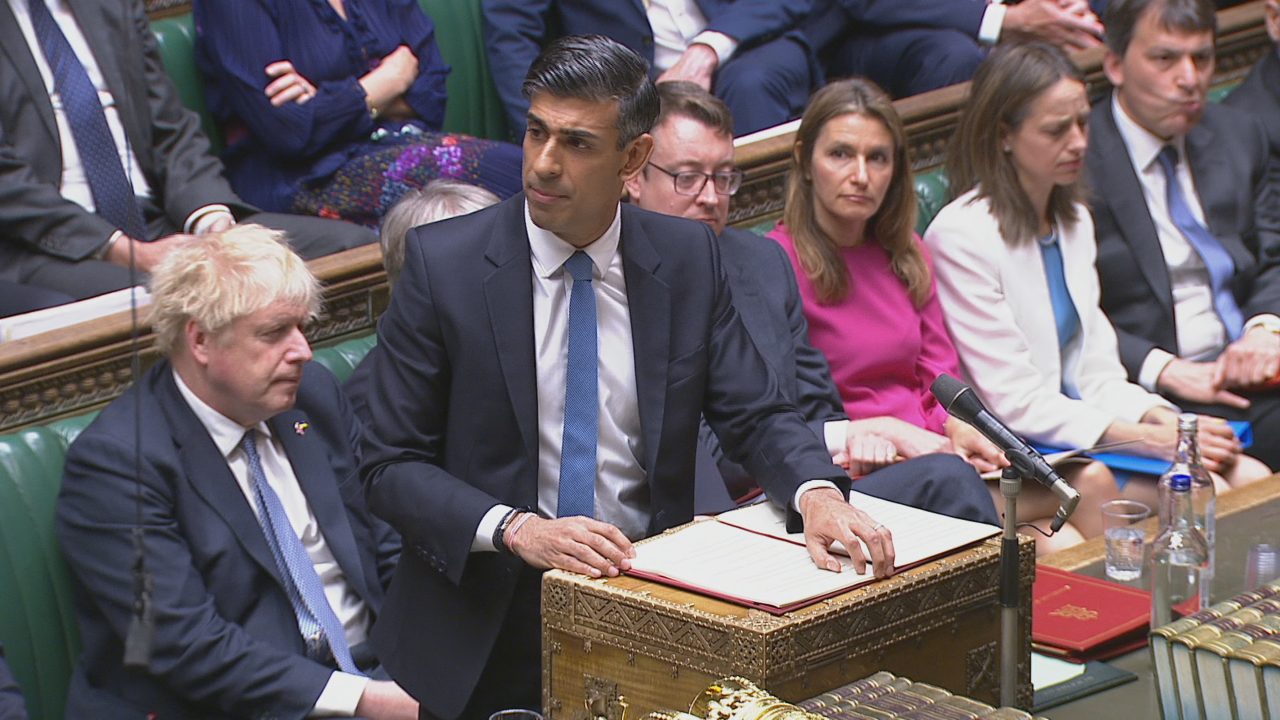 A one-off payment of £650 is to be given to around eight million households in the UK to help families with the cost of living, Rishi Sunak has announced.

The chancellor also confirmed that a temporary windfall tax on oil and gas giants will be introduced.

In a statement in the House of Commons, Sunak revealed that pensioners will receive a one-off £300 payment and a one-off disability cost-of-living payment of £150 will be made.

“We should not be ideological about this, we should be pragmatic,” Sunak told MPs of the introduction of the new levy.

“It is possible to both tax extraordinary profits fairly and incentivise investment.

“And so like previous governments, including Conservative ones, we will introduce a temporary targeted energy profits levy.

“But we have built into the new levy a new investment allowance similar to the super-deduction that means companies will have a new and significant incentive to reinvest their profits.

“The new levy will be charged on profits of oil and gas companies at a rate of 25%, it will be temporary and when oil and gas prices return to historically more normal levels, the levy will be phased out with a sunset clause written into the legislation.

“And crucially, with our new investment allowance, we are nearly doubling the overall investment relief for oil and gas companies.

Almost all of the eight million most vulnerable households across the UK will receive the new one-off £650 cost-of-living payment, the chancellor said.

He pledged that the Government would not “sit idly by” while there is a risk that some people living in the UK might be set so far far they “might never recover”.

Sunak told the Commons: “We need to make sure that for those whom the struggle is too hard and for whom the risks are too great they are supported.

“This Government will not sit idly by while there is a risk that some in our country might be set so far back they might never recover. This is simply unacceptable and we will never allow that to happen.

“And I want to reassure everybody that we will get through this, we have the tools and the determination we need to combat and reduce inflation.

“We will make sure the most vulnerable and least well-off get the support they need at this time of difficulty, and we will turn this moment of difficulty into a springboard for economic renewal and growth.”

The Chancellor said that payments will be made by the DWP in “two lump sums”, the first in July and the second in autumn.

“Over 8 million households already have income low enough for the state to be supporting their cost of living through the welfare system,” he told MPs.

“Right now they face incredibly difficult choices so I can announce today we will send directly to around 8 million of the lowest income households a one-off cost-of-living payment of £650, support worth over £5bn to give vulnerable people certainty that we are standing by them at this challenging time

“DWP will make the payment in two lump sums, the first from July, the second in autumn, with payments from HMRC for those on tax credits following shortly after.”

Sunak said the payments will be sent straight to people’s bank accounts.

On help for pensioners, Sunak told the Commons: “From the autumn we will send over eight million pensioner households who receive the winter fuel payment an extra one-off pensioner cost-of-living payment of £300.

“Disabled people also face extra costs in their day-to-day lives, like having energy-intensive equipment around the home or workplace.

“So to help the six million people who receive non-means tested disability benefits we will send them, from September, an extra one-off disability cost-of-living payment worth £150.

“Many disabled people will also receive the payment of £650 I’ve already announced, taking their total cost-of-living payments to £800.”

The Chancellor concluded his speech by insisting that the British people can “trust this Government” because “we have a plan for a stronger economy”.

He said: “I know that there are other pressures. I am not trying to claim we have solved the entire problem for everyone. No government could.

“But I hope that when people hear the significant steps we are taking, the millions we are helping, they will feel some of the burden eased.

“Some of the pressures lifted, and they will know this Government is standing by them.”

Debt-help charity, Christians Against Poverty Scotland, has warned however that many households won’t feel the full benefit of these measures due to benefits deductions.

The charity’s national director, Emma Jackson said: “While these emergency measures will help to meet people’s needs right now and buy some time, they do not address the underlying reasons why people’s incomes are inadequate. We are deeply concerned about those who will continue to suffer through benefit debt deductions and not see the full impact of these measures.

“Although technically worth more than benefits uprating, a one-off £650 is less than the amount lost by households when the Universal Credit uplift ended. We are deeply concerned about low income households who will not receive this support as they are not eligible for means-tested benefits.

“Even for those who receive the total package of £1,200, equivalent to £100 per month, it will simply not be enough for many households. We are seeing much higher deficits, sometimes of several hundred pounds every single month. The reality is that while more generous, even these payments will fail to keep many out of destitution.”