The First Minister says Scotland is set to be battered by a second, and 'more severe', storm named Corrie on Sunday. 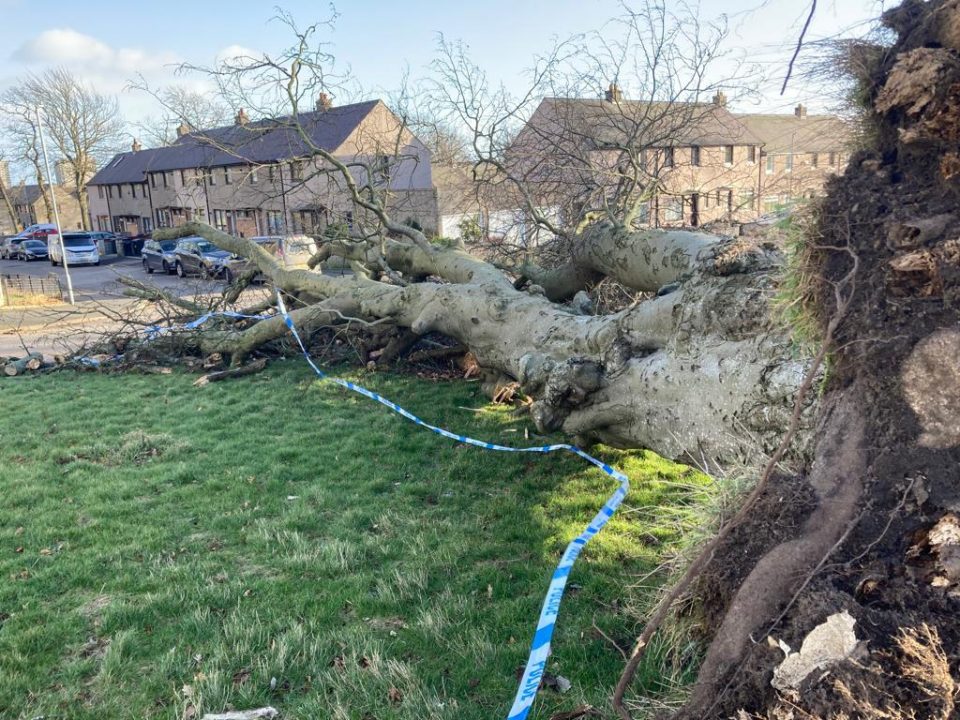 A woman has died after being crushed by a falling tree in Aberdeen during Storm Malik as Scotland is set to be hit with another storm on Sunday.

The 60-year-old was fatally injured on Deveron Road near the city’s Eric Hendrie Park on Saturday morning.

This is the first confirmed victim of Storm Malik in Scotland as the furious weather causes extensive disruption and damage across the country.

South of the border, a nine-year-old boy died and a man is in hospital after a tree fell on them in Winnothdale in Staffordshire.

A police spokesperson said: “Emergency services were called to Deveron Road in Aberdeen around 10.30am on Saturday January 29 to reports of a sudden death of a 60-year-old woman.

“There are no suspicious circumstances.

“A report will now be sent to the Procurator Fiscal.”

The First Minister chaired a resilience meeting on Saturday and announced that a second storm is making its way towards Scotland.

She described the impact of Storm Malik as “severe” and offered her condolences for those affected by the woman’s death in Aberdeen.

Sturgeon said Storm Corrie is about to hit from late Sunday afternoon and may be more severe for parts of the country.

“Power companies working hard to restore supply ASAP but many SSEN customers, esp in NE may be without power over weekend. Importance of welfare support and good communication stressed.

“Unfortunately as Malik subsides, Storm Corrie is about to hit from late tomorrow afternoon & may be more severe for parts of Scotland – eg Highlands, Grampian, Tayside than anticipated. Please follow @metoffice for any updates to the weather warnings in place.

“Tragically, the very severe weather has resulted in loss of life today. My thoughts and condolences are with those affected.”

An amber warning for wind was in place until 3pm on Saturday across the east of the country, with parts of the Borders, Lothians, Fife, Tayside and Grampian expected to be worst hit.

A yellow warning is in now place in parts of the country, however on Sunday, a new amber weather warning takes place in northern parts of Scotland from 5pm to 6am on Monday morning.

On Saturday morning, STV meteorologist Sean Batty tweeted: “Had an extreme gust of 147mph recorded on the Cairngorm summit an hour ago.

“This is an incredible strength, but still a way off from the record of 173mph recorded back in 1986.”

Elsewhere, Sean noted 85mph gusts in Inverbervie, Aberdeenshire, and 75mph winds in Wick in the Highlands.

Storm Malik has left thousands of homes without power this weekend.

About 48,500 properties have suffered power cuts in the Aberdeenshire, Angus, Perthshire and the Moray Coast.

Another 6000 households are waiting to be reconnected in the Borders and Lothian.

Scottish and Southern Electricity Networks announced it has moved to Red Alert status following the disruption.

A spokesperson said: “We have experienced over 200 faults on our high voltage network and our operational teams have successfully restored power to around 45,000 customers in extremely challenging conditions.

“Around 25,000 customers currently remain off supply, with the main areas affected being rural Aberdeenshire and the Moray Coast, with pockets of customers also off supply in Angus, the Highlands and Perthshire.

“Whilst every effort will be made to restore power to as many customers as possible tonight, there will be customers who remain off supply overnight, with the full restoration of all customer supplies likely to extend across multiple days.”

The main areas which are likely to be most affected by prolonged outages are North East – Aberchider, Finzean, Monymusk, Newburgh, Rothienorman, Strachan, Whitehouse- AlfordGrantown on Spey area – Balindalloch, Boat of Garten, Dalwhinnie, Kingussie

Roads have also been affected.

The A90 Aberdeen Western Peripheral Route is partially blocked due to a fallen tree just north of Cleanhill Roundabout.

The A1 has been closed in both directions between Dunbar and Innerwick in East Lothian as emergency services deal with fallen live cables.

The A68 at Melrose in the Borders has also been restricted in both directions due to debris on the carriageway.

ScotRail has also withdrawn a number of services as a safety precaution after trees were brought down on the Highland mainline, West Highland Railway Line and Aberdeen-Dundee line.

On Saturday morning, services were suspended between Dundee-Aberdeen, Aberdeen-Inverness, Inverness-Kyle/Wick/Thurso and on the West Highland Railway Line north of Helensburgh.

Paul McKay, from Scotrail, told STV News: “We’ve seen significant impact from the storm with a number of routes having to be closed because of falling trees and debris on the line.

“Our colleagues in Network Rail Scotland have been out today clearing those routes to try and get services up and running as quickly as possible but we appreciate the frustrations that that will have for customers not being able to travel but it’s absolutely in the best interest of everyone that we don’t run trains on some routes at the moment given the impact of the storm.”

Liam Sumpter, Network Rail route director for Scotland, said: “We have taken the decision to stop trains running in some parts of the country while we assess the impact of Storm Malik on our infrastructure.

“The safety of our customers and colleagues is always our first consideration during severe weather.”

Mr Sumpter added: “We have teams in place across the country ready to react quickly to cut back trees and repair any damage caused by the weather.

“We will reopen the affected lines as quickly as we can for our customers, but are urging passengers to check their journey before traveling.”

With Storm Corrie set to hit the country on Sunday, ScotRail train services will cease running early on Sunday evening as a “safety precaution”.

A Network Rail spokesperson said: “Storm Corrie has the potential to cause significant disruption to our infrastructure blowing trees onto tracks and damaging equipment.

“A controlled withdrawal of ScotRail services on Sunday evening is the safest way to manage the risks posed by the storm.

“We will be working hard throughout Sunday to respond to any issues caused by Storm Corrie and will reintroduce services as soon as lines are inspected for damage and we are sure it is safe to do so.

”A ScotRail spokesperson said: “We know the impact that the earlier withdrawal of services will have on customers but it’s a necessary step to ensure the safety of our staff and customers due to the severe weather.

“If you have to travel tomorrow, please check the ScotRail app or website before heading to the station. With services being withdrawn in the early evening, we’d ask all customers to carefully plan ahead.”

Meanwhile residents in the west end of Glasgow were also evacuated from there homes over fears the high winds had exacerbated existing structural issues with the towers of Old Trinity College.

A spokesman for Glasgow City Council said it would likely be “considerably longer than 24 hours” before residents could return home.

The commercial director at Aberdeen Football Club has shared photographs of the damage to Pittodrie Stadium after the decision was made to call off Saturday’s match against St Johnstone.

Robert Wicks posted four photographs of damage caused by Storm Malik on Twitter and wrote: “Nobody should be in any doubt that it was the right decision to postpone the match today.

“There is damage across the stadium and no way it could be repaired before kick-off, not to mention serious risk for fans & staff to travel from across City and Shire with chaos on the roads.”